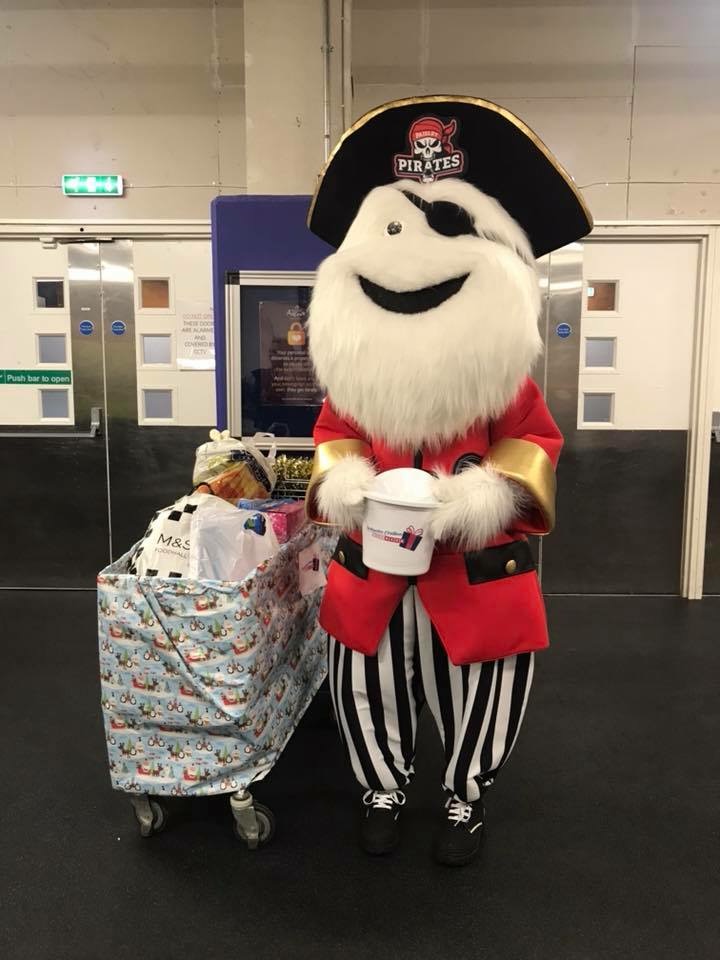 Pirates overcame a spirited performance by the visitors and, in the process, brought the latter’s unbeaten start in the league to an end.

The home side were the quicker to settle and were ahead in the 4th minute as Wallace got on the end of a cross come shot from Sarginson to beat Chalmers and give his side a lead which they never lost. Both sides continued to push forward but it was Pirates who doubled their lead in the 9th minute as Dobson skated through and fired a beauty into the top of the net to put daylight between the teams. With no further scoring in the period, the teams headed for the dressing rooms at the first break with Pirates holding a handy 2-0 advantage.

The hosts got off to the best possible start in the middle session with a goal after only 29 seconds. Chalmers could only parry a rasping shot from Divok, and the puck fell perfectly for Thorp to nudge it over the line to give Pirates a three goal margin. Back came the visitors, however, and after a sustained spell of pressure they got their reward in 28 minutes through Malcolm. Pirates steadied the ship thereafter and restored their margin of three just after the halfway point, Walker merely flicking a long range effort which flew past Chalmers to nestle in the bottom corner. The same player was on hand after 35 minutes to net his second of the night, and with the buzzer sounding after 40 minutes Pirates were well in control at 5-1, a Hamilton shot which bounced off the underside of the bar and appearing to land behind the line being washed out by referee Emmerson.

In spite of their four goal advantage, Pirates had to be on their toes in the final session as Lynx continued to push forward towards Russell in the home goal, and after 45 minutes the visitors struck with Malcolm’s second goal of the night, followed by a third from former Pirate Andrew Murphy to tighten up the scoreline at 5-3. With four minutes to go, the accumulation of heavy challenges during the course of the game came to a head as Divok and Andreucci went head to head with the Durkacz brothers in two separate exchanges on the ice, Joe Durkacz eventually being flung out of the game with the other pugilists receiving minor penalties, which were enough to end their participation in the match.

The excitement wasn’t quite over for the evening, however, as with the clock running down in the final few seconds, Walker sent Henderson away and the forward skated through to beat Chalmers with one second remaining, putting a final gloss on the evening to give Pirates a 6-3 win.

Pirates have a weekend off and are next in action on Sunday 16 December when they play host to Kirkcaldy Kestrels.

Paisley Pirates may have enjoyed a rare weekend off from on-ice action, but away from the usual weekend excitement the club has been just as busy as ever in the run up to the Christmas period.

“Yes, it was good that the players got a well-earned break from their usual routine,” said Off Ice Operations Manager Jackie Turley, “but the work of the club goes on, with plenty of effort going on behind the scenes which folk sometimes don’t see.”

“We’ve been continuing to take group bookings at a steady rate now that we’re in Christmas mode, with a take up rate which suggests people are getting the message that they can come with their group and see the Pirates for very little money either as a pre-Christmas treat, or even as something a little different to their usual programme of events ay any time during our season.”

“Certainly, we’ve been busier in terms of taking bookings for the game on 16 December against Kirkcaldy, and the local derby against North Ayrshire Wild on Saturday 22 December, but the group discount rate is in operation for ALL home games and clubs and groups shouldn’t hang around too long if they’re wanting to snap up a real bargain. We know money’s tight everywhere right now so this is a chance for us to give back to the community which supports us the whole year round.”

“We’re also looking for individuals who would like to supp’ort us via our Match Night Puck Sponsorship scheme, where again, for little money, fans can sponsor the match night puck, receive it with special engraving on it, and get their photo taken with both team captains before the match in question. We’ve got another such event coming up on 22 December, but there’s other dates available if there’s supporters looking for a souvenir with a difference, or wanting to give a young relative an extra special present.”

“As usual, we’ve loads of seasonal souvenirs at our shop, including special Paisley Pirates calendars which are disappearing faster than Santa Claus down a chimney, so we’d advise folk not to waste any time in getting their order in, and/or contact us at paisleypirates@gmail.com if they want to make a group booking.”

Paisley Pirates Supporters Club has also been very busy, arranging a collection of new toys in aid of the Renfrewshire Christmas Toy Appeal, which took place at the recent match against Aberdeen Lynx.

“We were well pleased with the response we got from our ever-generous supporters,” said Chairwoman Marie Cadenhead. “We were able to fill a number of trollies with brand spanking new toys donated by supporters, and we also took a very healthy sum in cash donations on the night. The money raised will go towards buying specialised gifts for children in need of them, while, thanks to the generosity of Paisley Pirates fans, an awful lot of kids will have a happier Christmas than might otherwise have been the case.”