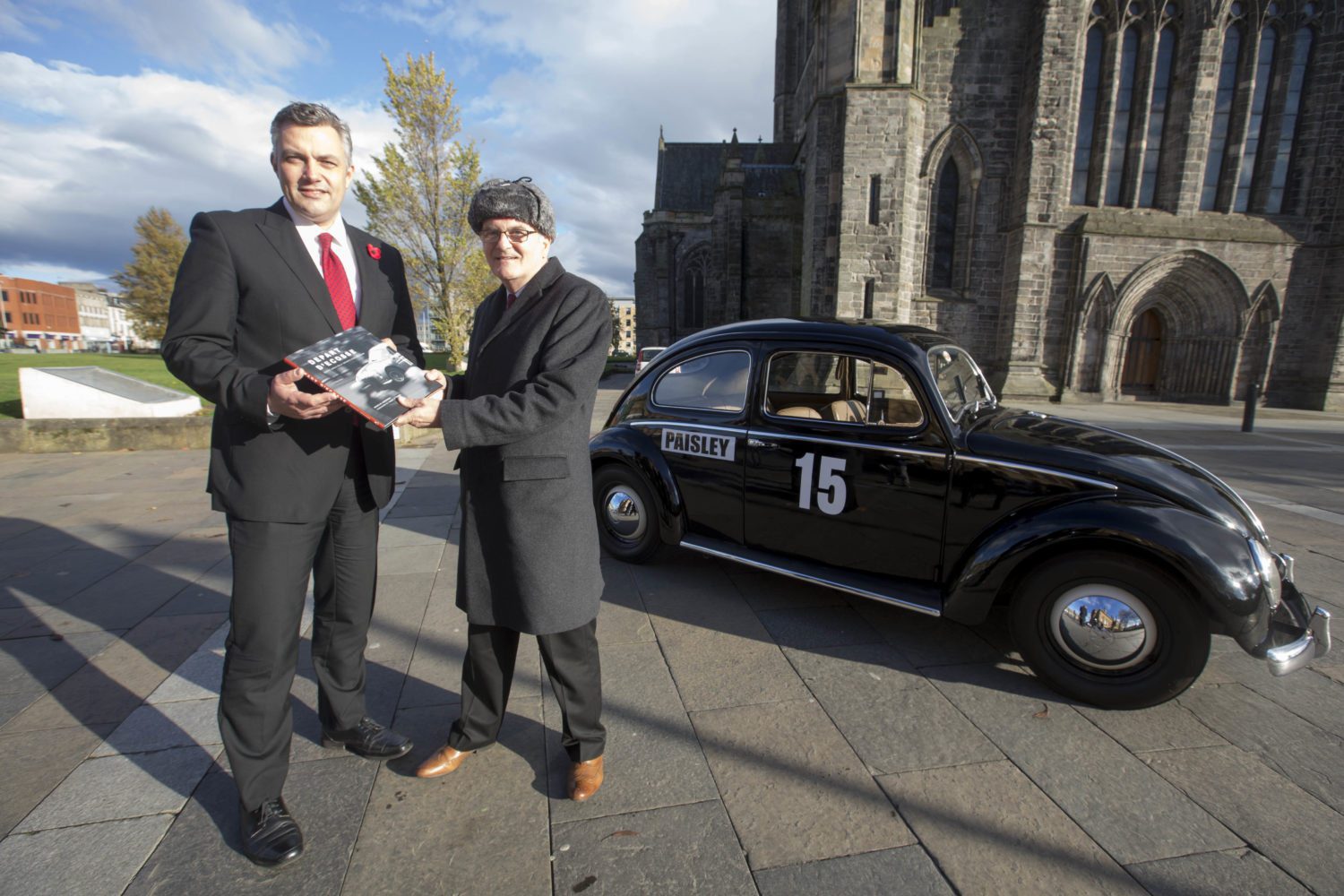 [vc_row][vc_column][vc_column_text]The story of a Dundee schoolboy’s dream of bringing the world famous Monte Carlo Classic Rally back to Scotland is the subject of a brand new book.

Immediately, he fell in the love with ‘the Monte’, a 2000 mile endurance rally across the Alps to the Principality, and vowed to bring the start back to Scotland.

It wasn’t until nearly fifty years later that Douglas, then in his early sixties, managed to achieve the dream people told him would never become a reality.

In 2011, the centenary event returned to Glasgow for the first time since 1973, and this month, around 60 classic cars are gearing up for the 2015 Start from Paisley.

The book, ‘Depart D’Ecosse’ follows Douglas’ successful quest to return the start, which has brought £5 million to the nation’s economy and attracted global media coverage over 4 years, to its Scottish ‘home’.

And, as he has done since 2011, he will also be amongst the drivers heading across the Channel from Paisley to the sunshine of the French Riviera, on January 28th.

“I was at the cinema, as a young boy, and it was there that I first saw the newsreels of the Monte Carlo Rally. I was captivated by the beautiful cars, the adventure and the glamour and I wanted to go to Glasgow to see the drivers being waved off on their journey to France.

“My dad was working and I was too young to go through on my own from Dundee. As a result, I never, ever saw any of the old Scottish starts in the fifties and early sixties.

“Glasgow lost the event after 1973, as it evolved into a more commercially orientated rally, and I thought that my chance of ever seeing the Monte in real life had gone,” reflects Dr Anderson, a retired academic and now a volunteer motorsport event organiser.

Douglas’ desire to see the Monte back never dissipated, however, and – after his own children had grown up- he returned to his childhood interest in the Monte.

The book charts the steps to the event’s return, from the formation of a car club to convincing the organising club, the Automobile Club de Monaco, to choose Scotland as a start point.

Published by Argyll Publishing, there are fascinating stories from competitors and tales of pre-war cars, with no heaters and marginal brakes, ploughing through snowdrifts twice their height.

The book, which contains previously unpublished images by photographer Stewart Ramsay and a foreword by Paddy Hopkirk, is expected to sell well amongst car fans and lovers of adventure and Scottish history.

“Everyone said that the Monte would never come back to Scotland. That was probably the spur I needed,” added Douglas.
“When the organisers in Monaco finally told us we had secured the Start in 2011, it felt like the end of a journey. It was actually only the beginning, as the book illustrates.”

The Monte Carlo Classic Rally has attracted almost 50 000 spectators since its return to Scotland in 2011.

Councillor Mark Macmillan, leader of Renfrewshire Council, which is hosting this year’s rally, said: “We are expecting another big crowd after thousands turned out to wave the cars off last year – a great occasion which is well documented in the book.

“Douglas’ research perfectly showcases the rich and varied history of this fantastic event and its long links with Scotland, and I am sure it will be a great read for any new and old motorsport fans.”[/vc_column_text][/vc_column][/vc_row]

Glasgow News? Daily Updates part of our network
Roll up, roll up for the circus on ice!