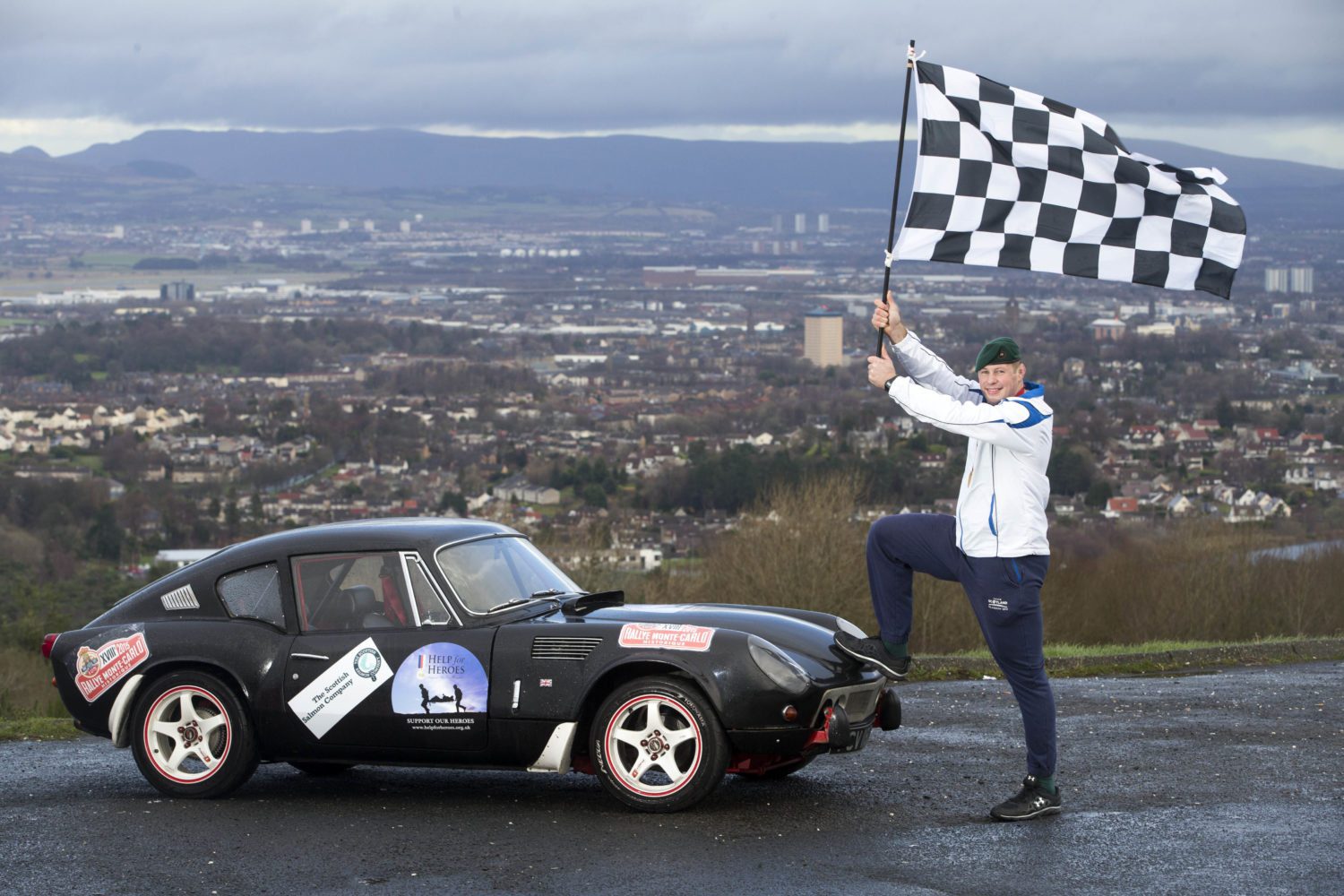 The Broxburn-based 31 year old, whose winning performance at SECC will remain one of the highlights of the Glasgow Games, has been shedding kilos for a return to his previous career in the Marines.

However, the lifelong classic car fanatic could not resist the glamour of a drive at ‘The Monte’ after receiving an official drafting to participate.

Sherrington, who joined the Royal Marine Commandos at seventeen, seeing duty in Iraq before starting his London Olympics and Glasgow Commonwealth Games bid, has built his own 1966 Triumph Spitfire Mk2 from a box of bits.

Now the Olympian and car-loving wife, Zoe, will be in one of the first of the 60 classic cars over the ramp in January for the UK start of the rally, in Paisley.

The rally is back in Paisley after a successful debut last year and Renfrewshire Council is hosting it as part the push before Paisley’s bid for UK City of Culture, status 2021.

Talks are also on-going to see if the former Team Scotland Judoka, who hung up his robes after the Games, can drive as far as the European entry point at Rheims.
The inaugural ‘Tour to Reims’ has been added to the revamped 104th event, expected to net over £1 million for the Scottish economy.

“At the moment I am in the middle of a military fitness regime to go back on active duty but I was delighted when the idea of driving at ‘the Monte’ came up and we are looking at the possibility of going as far as Reims, if things fall into place,” said Chris, who is raising money for Help for Heroes.

“The car I will be driving is one I built myself, the first time in three months. The second time I rebuilt the car, with a modern engine and gearbox, I wrote a build thread on the Club Triumph forum.

“My wife Zoe and I used it to complete a non-stop drive for 48 hours in the Round Britain Reliability Run. To complete that was a major achievement and should hold us in good stead. Thankfully being a Vehicle mechanic meant we had zero defects with the car.

“When you’ve done a gearbox change in the desert in Iraq, you know you can handle most extreme things. My biggest problem in timed events is always wanting to help everyone else, if they experience any bother I’m always the first to pull over to offer help.”

Organisers of the rally, which sets off from Abbey Close in Paisley on January 28th, are delighted to welcome the Sherringtons to the event.

Chris, too, believes the lure of the Monte remains strong, 104 years after Prince Albert established it in the sunshine Principality.

“I knew about the Monte mostly through my wife Zoe because she had a Mini and there was always talk about the great Mini years in the event with the likes of Paddy Hopkirk.

“I remember seeing the old photos of cars struggling up icy mountainsides in the Alps. If you are a lover of classic cars, it is definitely something to be a part of.”

Competitors driving the 2600 km to Monte Carlo from Paisley are to get an extra night’s sleep after French organisers bowed to a request for a rule change.
Unlike the other host cities of Copenhagen, Barcelona, Reims and Turin, Scottish starters usually have to drive through the night before reaching Stage Two in France.

Now they will be given an extra night’s rest before the French stages get underway.
Renfrewshire Council Leader Mark Macmillan added: “We are delighted to welcome the Monte back for the second year in a row.

“Last year’s event was hugely popular and Paisley Abbey provided a stunning backdrop for the cars departing from the town centre.

“We are fast establishing the town as a key destination on Scotland’s events map as we head towards our bid for UK City of Culture 2021.

“Being able to attract events of the calibre of the Monte is a major thumbs-up for everything the town has to offer.”[/vc_column_text][/vc_column][/vc_row]