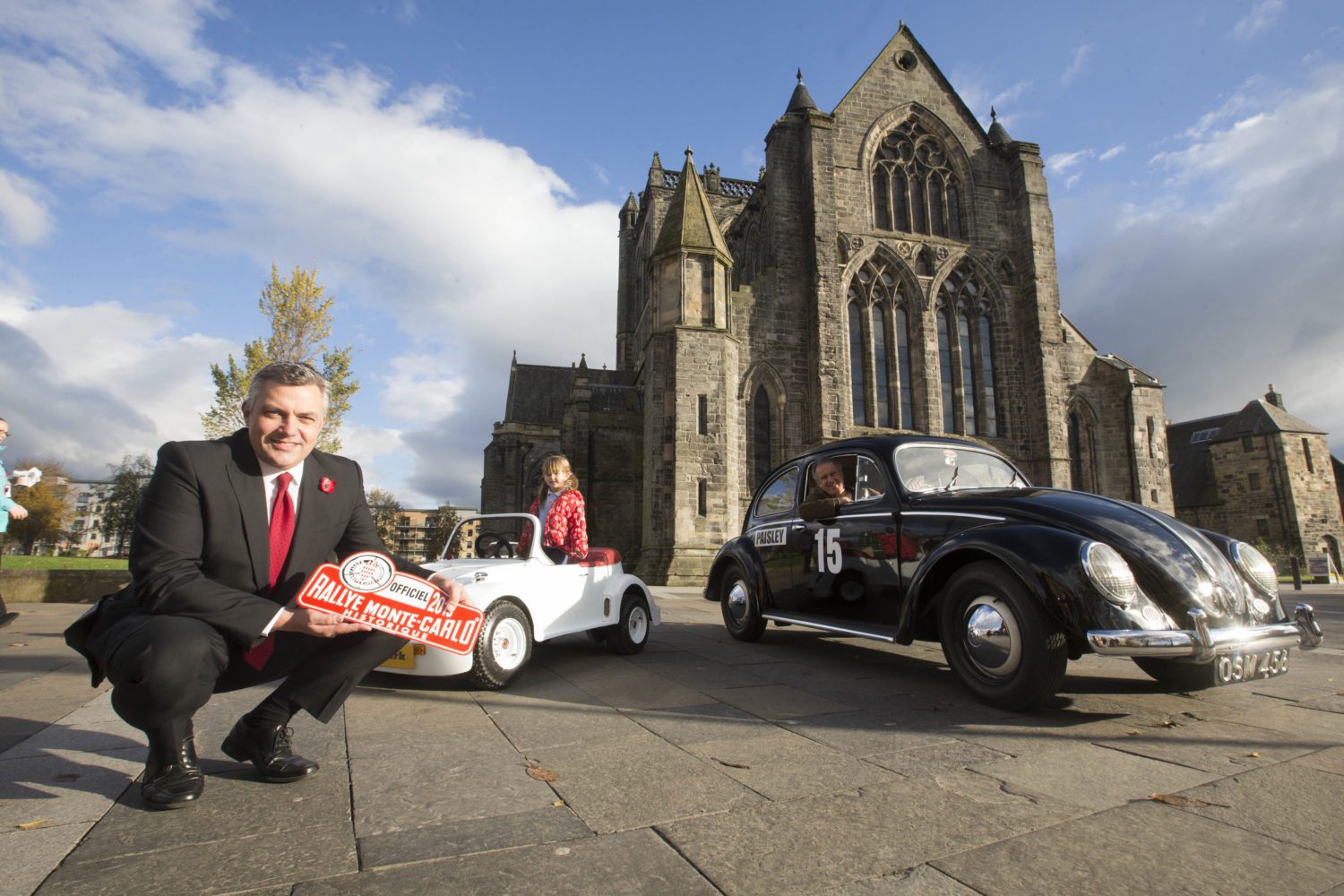 [vc_row][vc_column][vc_column_text]Paisley is getting set to shine in the international spotlight once again when the Monte Carlo Classic Rally returns to the town in the new year.

It was announced this week that Renfrewshire will again host the only UK start leg of the event – one of the most famous and glamorous in motorsport.

Paisley sits alongside Barcelona, Copenhagen, Turin and Reims as host cities for the start legs, placing the town in illustrious company.

The Rally is coming back to Paisley after a very successful debut in 2014 when tens of thousands came out to see the ‘grand depart’ as cars headed off to France.

Around 70 cars – including classic Porsches, Mini Coopers and even Linwood-built Hillman Imps, went over the ramp in front of the striking backdrop of Paisley Abbey.

The 2015 event will take place in the same venue, with the cars setting off at 7pm on Wednesday 28 January.

Renfrewshire Council Leader Mark Macmillan believes the decision to bring the Monte back to Paisley is a thumbs-up to the town’s growing standing as a venue.

He said: “We are thrilled to welcome such a prestigious and world-famous event as the Monte Carlo Classic Rally back to Paisley.

“We have big plans to use events, culture and heritage to drive a wide-ranging programme of regeneration for the town, leading up to a bid for UK City of Culture in 2021.

“Being able to attract the only UK start of the Monte Carlo Classic Rally places the town in the international spotlight, and is a perfect fit for those plans.

“Between this, last month’s Spree festival and the upcoming Christmas Lights Switch-on, Paisley is firmly on the map as a destination for top-class events.”

This year’s rally will see rule changes meaning drivers leaving Scotland will have an extra night’s sleep on the 2,600km-trek through the Channel Tunnel and over the Alps to the south of France.

Organisers believe the Monte has produced a £5 million economic spin-off since it returned to Scotland in 2011.

Douglas Anderson, chair of the Rally Start Committee, said: “The rule change is an endorsement of how much the French organisers value the Scottish start and we are looking forward to another great event, starting from Paisley Abbey.

“The changes will make the event more accessible for those wanting to start from Scotland. We’ve already had interest from Scandinavian crews for this year.”