Three new job support programmes worth £750k aimed at breaking down barriers to getting people into work and boosting Renfrewshire’s recovery from the pandemic have been launched.

Renfrewshire Council’s convener for Economy and Regeneration Cllr Andy Steel made the announcement today during a visit to the area by Scottish Government Minister for Just Transition, Employment and Fair Work, Richard Lochhead. 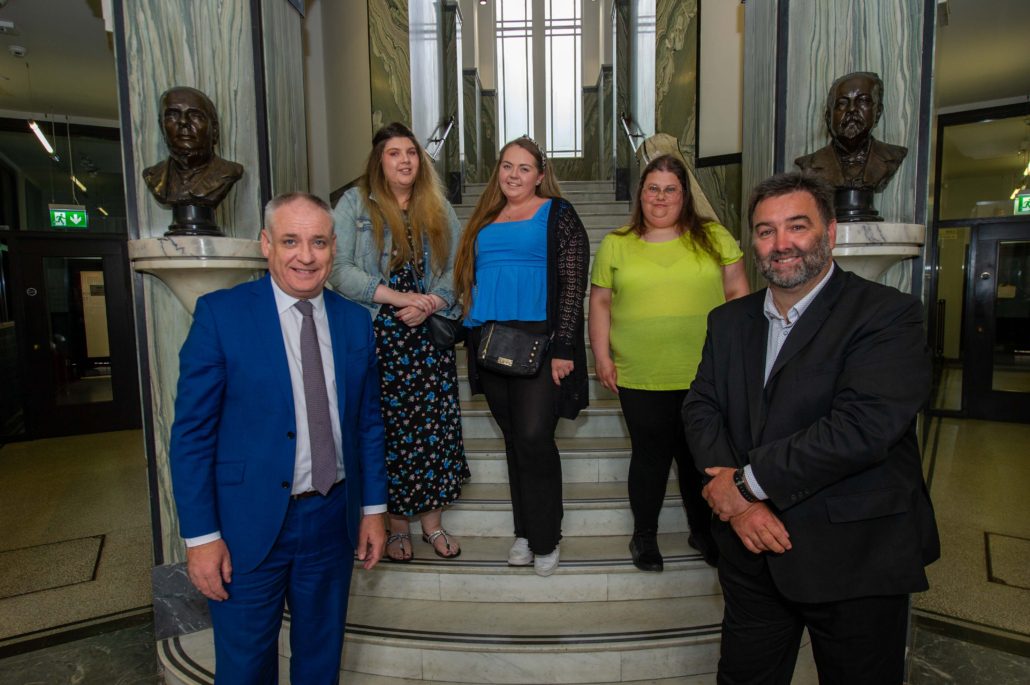 The three new Renfrewshire programmes will target support to people and businesses to help overcome some of the issues preventing people getting back into work. They are:

Transition Fund for Parents – for parents who are out of work and on Universal Credit. This will see grants of up to £1,000 paid over the first three months in the job, where they may be waiting on their first wage and while benefits change, to help with practical costs such as travel, childcare, clothing or training. 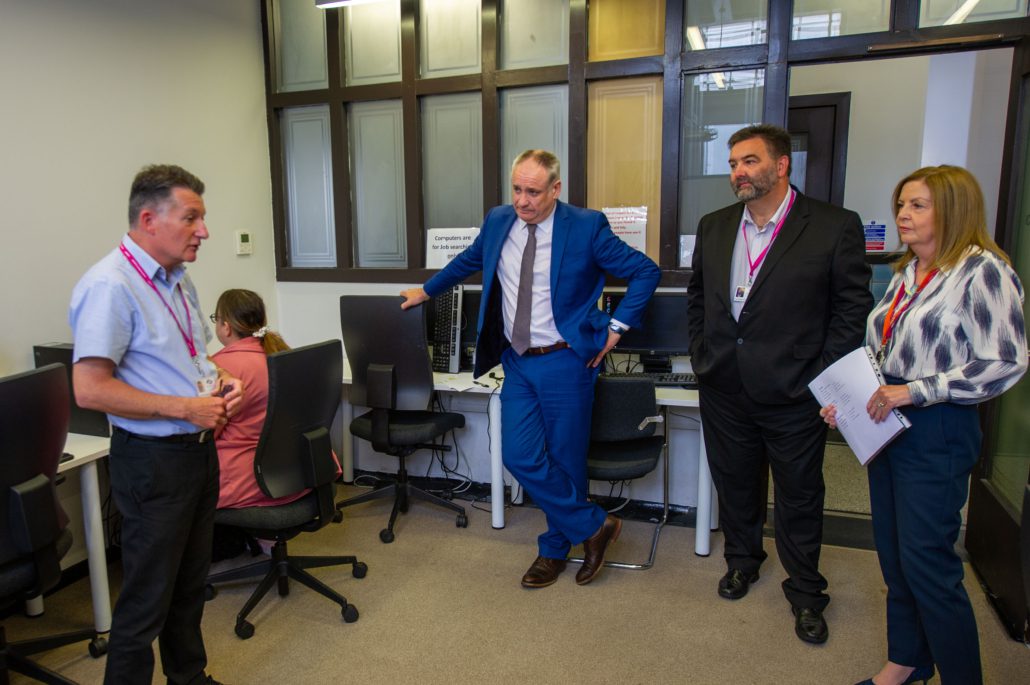 Skills and Training Grant Programme – a new fund for to help people on Universal Credit, either unemployed or on low-pay, gain new skills and move into better-paid work. This will see support of up to £3,500 made available to help the costs of training which will help them advance their careers.

Parental Employment Support Employer Recruitment Initiative – a pilot scheme which will pay wage subsidies to help businesses create new part-time jobs which start and finish within school hours – for parents who want back into work but for whom working 9 to 5 isn’t possible.

Mr Lochhead was in Paisley today where Cllr Steel gave him a tour of the council’s Invest in Renfrewshire employability hub in the Russell Institute building on Causeyside Street. There, he met staff, businesses and residents who have benefitted from existing support to help people into jobs. 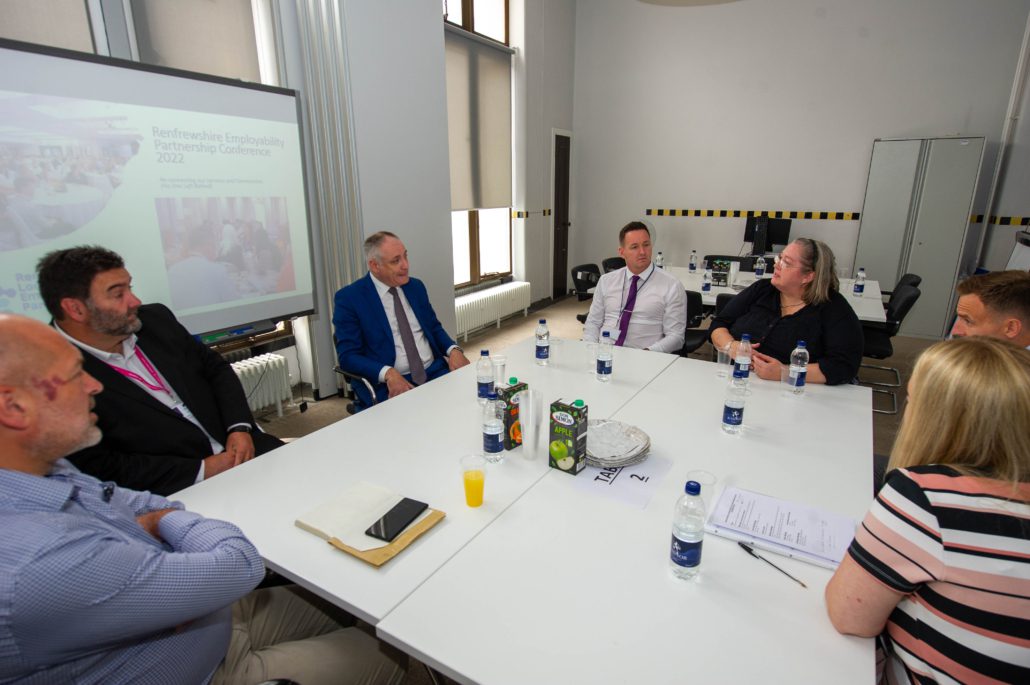 Cllr Steel said: “Here in Renfrewshire, supporting people on low incomes and helping drive the area’s recovery from the pandemic are two of the central missions of this council, so I am delighted to today launch three new programmes targeted at doing exactly that.

“We know that in Renfrewshire the number of people out of work rose sharply during the pandemic but has now fallen to pre-pandemic levels, and that businesses are actively trying to fill vacancies.

“Our Invest in Renfrewshire team speak to jobseekers and businesses every day, so have real insight into the barriers which are holding those who are out of work back from getting into employment.

“So these three funds have been designed to overcome those – by helping cover the costs people will experience when starting a new job, supporting people to get the training they need to move into better-paid work, and helping employers offer more flexible and childcare-friendly hours.

“These programmes will help businesses fill vacancies and retain staff, which will in turn boost their own productivity, and hopefully create further opportunities down the line.”

Employment Minister Richard Lochhead said: “It’s great to see Scottish Government funding being used to make such a difference in Renfrewshire. This additional support shows the principles of our No One Left Behind approach to employability.

“We will continue to work with partners in local government, the third sector, private sector and others to realise Scotland’s ambitions for a wellbeing economy – tackling poverty and securing better lives for people and communities across the country.”

Invest in Renfrewshire is the council’s programme to help people find work and to support businesses to grow.

Their approach, based on integrated services and a partnership approach, has had an enormous impact on local employment figures since it was launched in 2012.

In that time, Renfrewshire has seen the biggest growth in youth employment of any area in Scotland – at 21.1% – and the area’s unemployment rates are now at an all-time low.

All three of the funds launched today are now open for applications and more information on how to do that can be found by emailing invest@renfrewshire.gov.uk, or calling 0300 300 1180.

Other Invest in Renfrewshire projects also covered by Renfrewshire’s share of the Covid Recovery fund include an expansion of the existing business growth grant scheme, support to help employers retain trainees hired through the existing Kickstart scheme for another six months, and extra funding for the council’s net-zero business grant scheme to help businesses reduce carbon emissions.

Can I Use Casino Bonuses to Play Online Blackjack Games?
Scroll to top
Go to mobile version