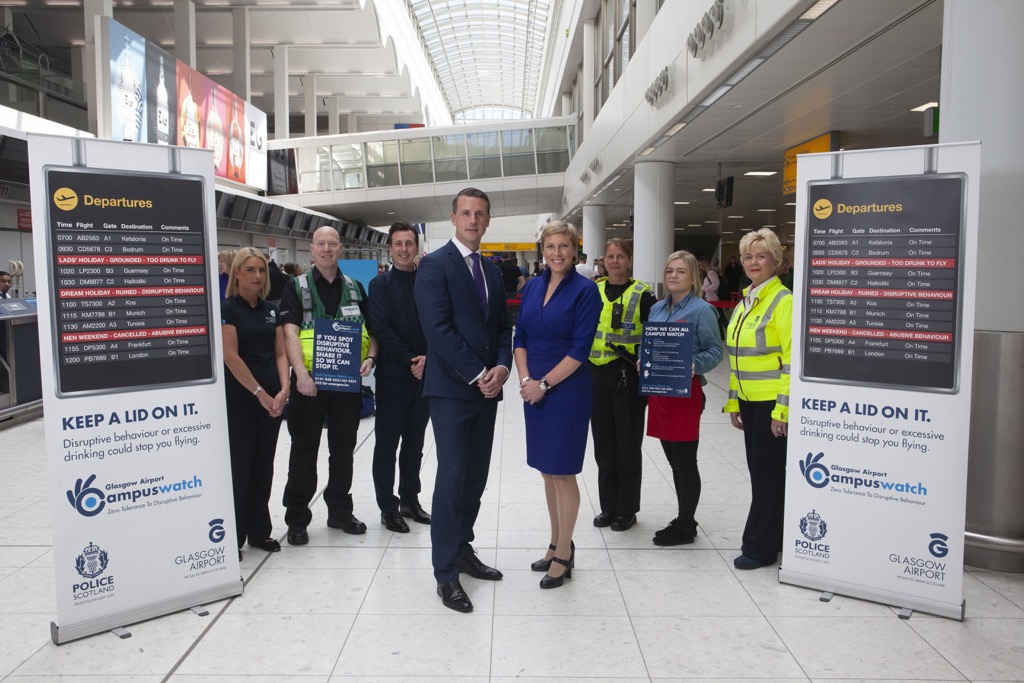 Glasgow Airport’s disruptive passenger campaign was launched today (Friday 24 May) by the UK Aviation Minister Baroness Vere, ahead of the 2019 summer season. 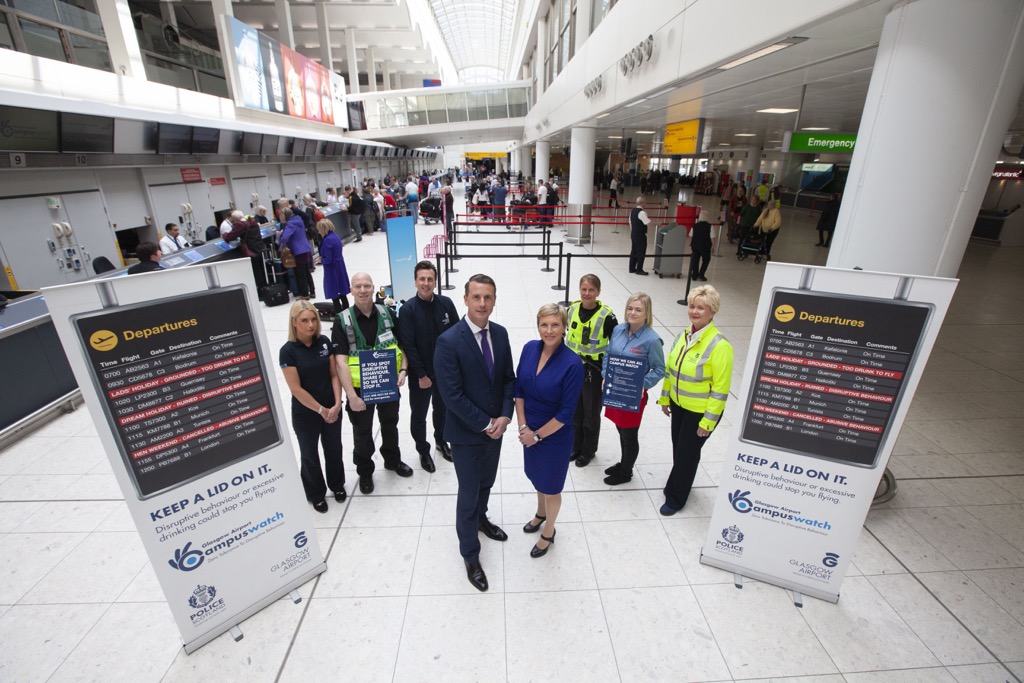 Meeting with the airport’s Managing Director and Police Scotland today, the Aviation Minister witnessed for herself the effectiveness of the Campus Watch scheme, which has seen the number of offences involving disruptive behaviour reduced by more than 50 per cent since 2017.

In partnership with Police Scotland, Campus Watch was introduced in 2013 to tackle disruptive behaviour at Glasgow Airport. From bar and restaurant employees to security crew and retailers, the scheme provides training, advice and support to staff who interact with passengers throughout the airport.

Airport staff will report individuals at risk of committing disruptive behaviour, such as those under the influence of alcohol, to the airport’s central control room. This information is shared with staff across the airport campus via a rapid text alert system and passengers can be given warnings about their behaviour, monitored by police and airport staff, or even refused alcohol at bars and restaurants. If their behaviour continues to cause concern, they could eventually be stopped from boarding their flight.

“Unruly and disruptive behaviour can be extremely distressful for those on board, threaten the safety of aircraft and be hugely inconvenient for passengers if planes are forced to divert to offload perpetrators.

“It is only right that passengers and staff are protected from such behaviour and it was great to witness the dedication of hardworking staff committed to ensuring the safety and wellbeing of passengers.”

The simple and effective Campus Watch approach has been an industry leader since its introduction and in recent years a number of other UK airports have visited Glasgow to learn and adopt the key principles of the programme.

Although launched ahead of the peak summer season, Campus Watch operates throughout the year and features an extensive staff awareness programme, including a series of drop-in sessions and stakeholder forums, to ensure people employed across the airport who interact with passengers receive the appropriate support and training in order to work together to tackle disruptive behaviour.

“Instances of disruptive behaviour at Glasgow Airport remain extremely rare and I’m confident our Campus Watch programme has played a key role in ensuring the vast majority of our passengers travel through the airport safely, responsibly and without incident.

“Offences involving disruptive behaviour were halved last year at Glasgow Airport and we are seeing a further reduction this year to date, so Campus Watch is having a positive effective and our zero-tolerance approach is getting through to the tiny minority who fail to act in a responsible manner.

“For many of our passengers, the arrival at the airport signals the start of their holiday and there’s absolutely nothing wrong with this. We want to ensure our passengers continue to enjoy a pleasant, safe and disruption-free journey and Campus Watch is in place to ensure it’s a memorable one for the right reasons.”

Disruptive behaviour covers a broad range of offences and actions ranging from a verbal warning to arrest. As an example, if an incident is alcohol related the passenger involved will be warned about their behaviour by Police Scotland officers and refused service across all retail and catering outlets throughout the terminal. Gate staff will be also notified in advance and will assess the passenger and determine if they should be permitted to board the aircraft.

Other steps taken at Glasgow Airport as part of the Campus Watch initiative include:

Glasgow Airport, its airline partners, caterers and retailers are signatories of the UK Aviation Industry Code of Practice on Disruptive Passengers launched in 2017. Like Campus Watch, the code has been designed to create a common, consistent approach to preventing and minimising disruptive behaviour.

In addition to this, the airport is also committed to continuing its support of the industry-wide One Too Many campaign and will this year support the European Union Aviation Safety Agency’s (EASA) Unruly Passengers initiative.

The UK government has set a clear expectation that 15% of slots made available under expansion at Heathrow Airport will be used for domestic flights, helping bring the UK closer together and encourage the growth of prosperity and jobs across the nation.