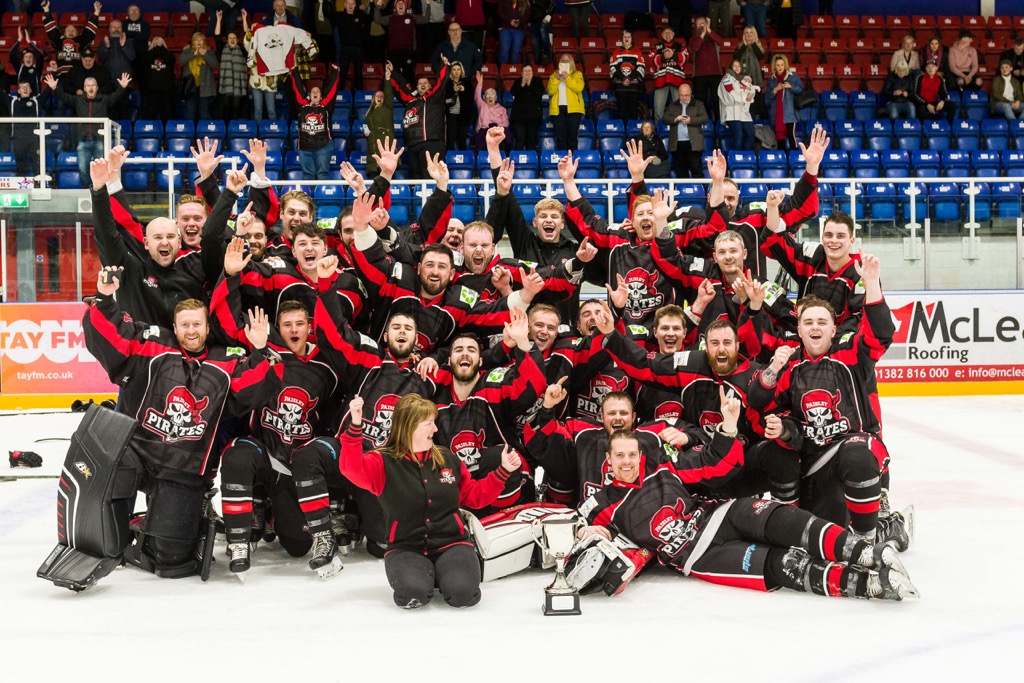 Pirates progressed to the SNL playoff final, but not before encountering some late night drama which kept spectators, literally, on their feet.

Kestrels made the better start and were on the board only three minutes as Pitcaithly beat Meechan to put his side ahead. Pirates responded immediately, and with Walker equalising within a minute, and ace sniper Abercrombie scoring with a peach of a flick three minutes later, Pirates were ahead 2-1 before the halfway point in the period. In spite of there being chances at both ends, and with a few niggly hits thrown in for good measure, there was no further scoring and Pirates headed for the dressing room nursing a narrow lead. 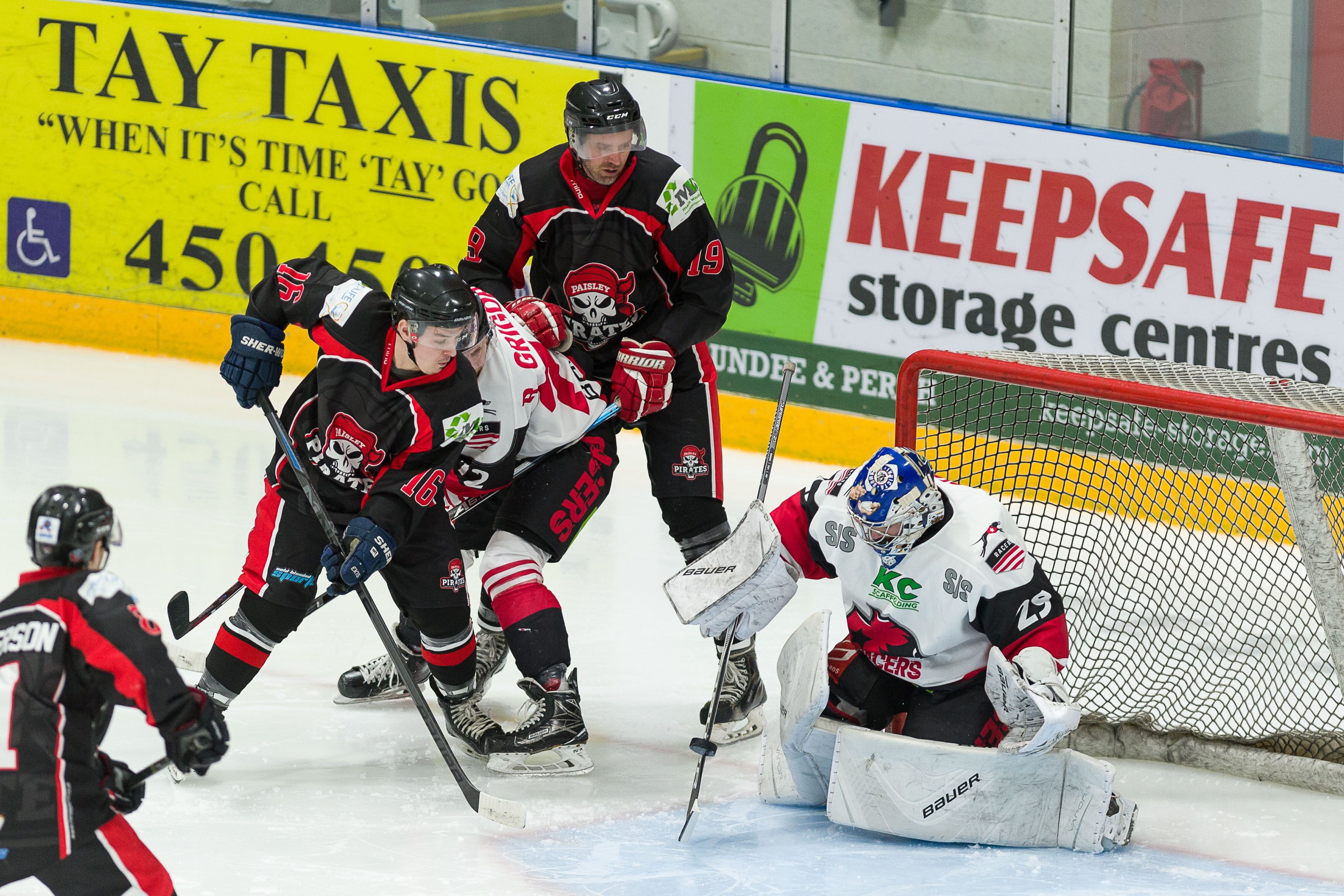 Pirates added to their lead after 26 minutes as Walker score an unassisted goal to stretch the advantage to two, and in spite of several powerplay chances to increase their lead, they were unable to do so, and were hit by a two goal burst from Kirkcaldy in the final two minutes of the session through Simpson, then Floyd, to bring the score back to 3-3 and set the scene for a nervy final 20 minutes.

With both teams going for the crucial go ahead goal, it was Pirates who made the breakthrough after 46 minutes as Abercrombie was again on hand to shoot past Jackson and give his side the vital edge. However, in a match which had already started late, there was further unexpected drama as with less than four minutes remaining, the fire alarm sounded and the building had to be evacuated, with players, officials and spectators alike obliged to stand outside the ice rink until a fire engine arrived. Eventually, after nearly an hour’s wait, the all clear was given, and Pirates safely negotiated the final few minutes to reach the final for the fourth time in the last six years, but still awaiting their first success in the competition.

On a night which few Paisley fans will ever forget, Pirates swept aside pre-tournament favourites Murrayfield Racers, who had been unbeaten by an SNL side for the entire season, and made history in the process as they picked up the SNL Playoff title for the very first time with their best display of the season.

Underdogs Pirates went for their more fancied opponents from the first whistle, in spite of their semi-final having finished less than 18 hours before,  and were ahead in less than four minutes as Walker beat McGill on the powerplay to give his side a lead that they never lost. Pirates continued on the front foot and were rewarded with another goal in 18 minutes as Martyn Guy scored a trademark second, with assistance from Sarginson and Thorp, to give them a 2-0 advantage by the break, Racers heading for the dressing room in the hope of regrouping. 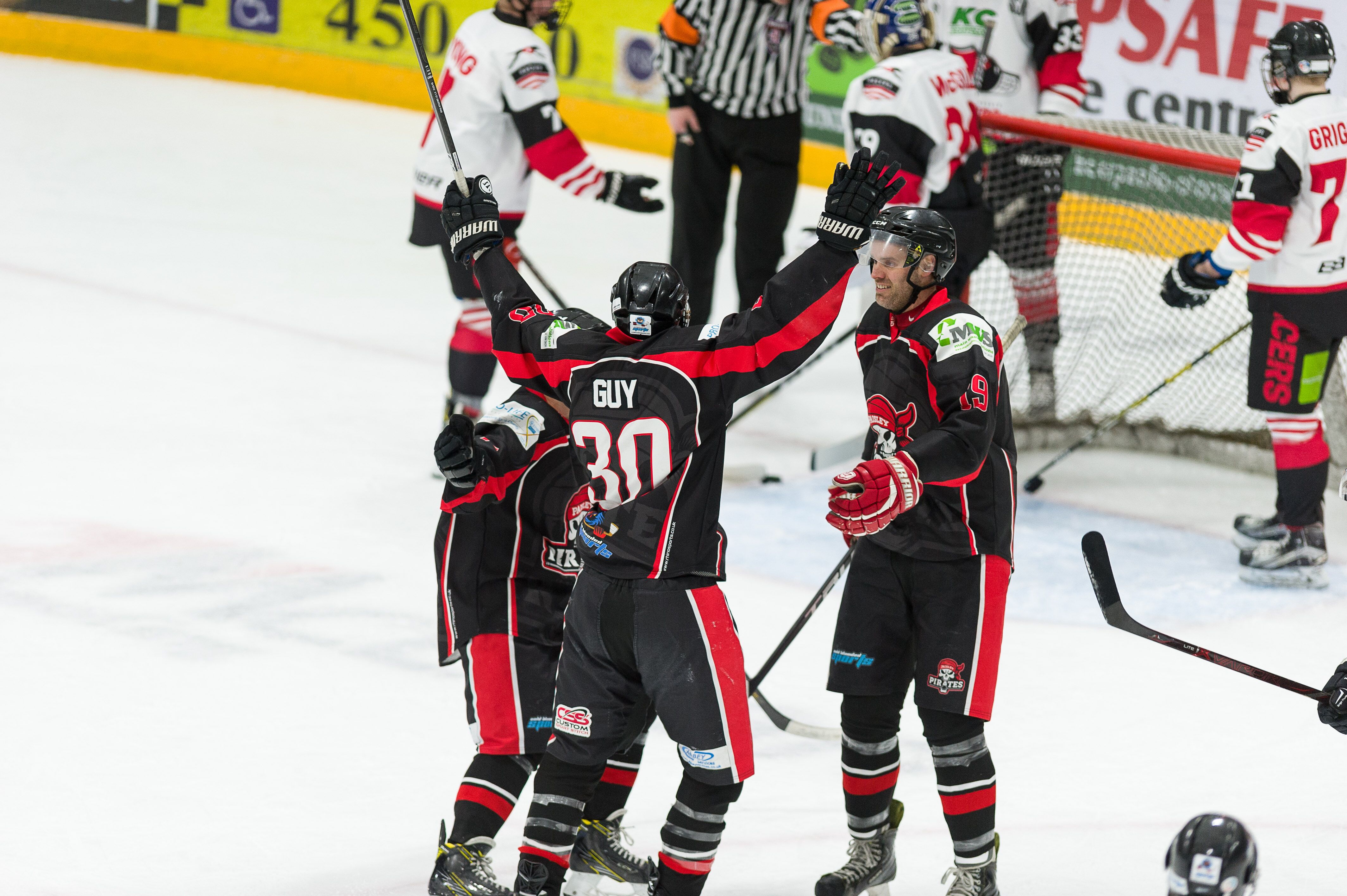 With Murrayfield looking for a quick goal to haul themselves back into the game in the middle period, it duly arrived within four minutes, but at the other end as Abercrombie, a Racer at the start of the season, took great delight in beating McGill to increase the lead to 3-0 in front of disbelieving fans in the arena. Pirates continued to control the play, combining sharp attacking play with a “they shall not pass” approach at the back, where Meechan and the defence kept the best efforts of the Edinburgh side at bay.

Pirates came out for the final session in a comfortable position, and with there possibly being an expectation that they would hold what they had, killed off any lingering hopes of a fightback, as first Walker, with his second of the night, and then skipper Chris Turley, on the powerplay, took the score to 5-0 in the first two minutes. A scuffle between Andreucci for Pirates and Richards Grigors for Racers broke up an otherwise scoreless final session, both taking extended breaks in the penalty box, but by that time the match was over as a contest, and the Pirates fans were celebrating in the stands on a famous night. 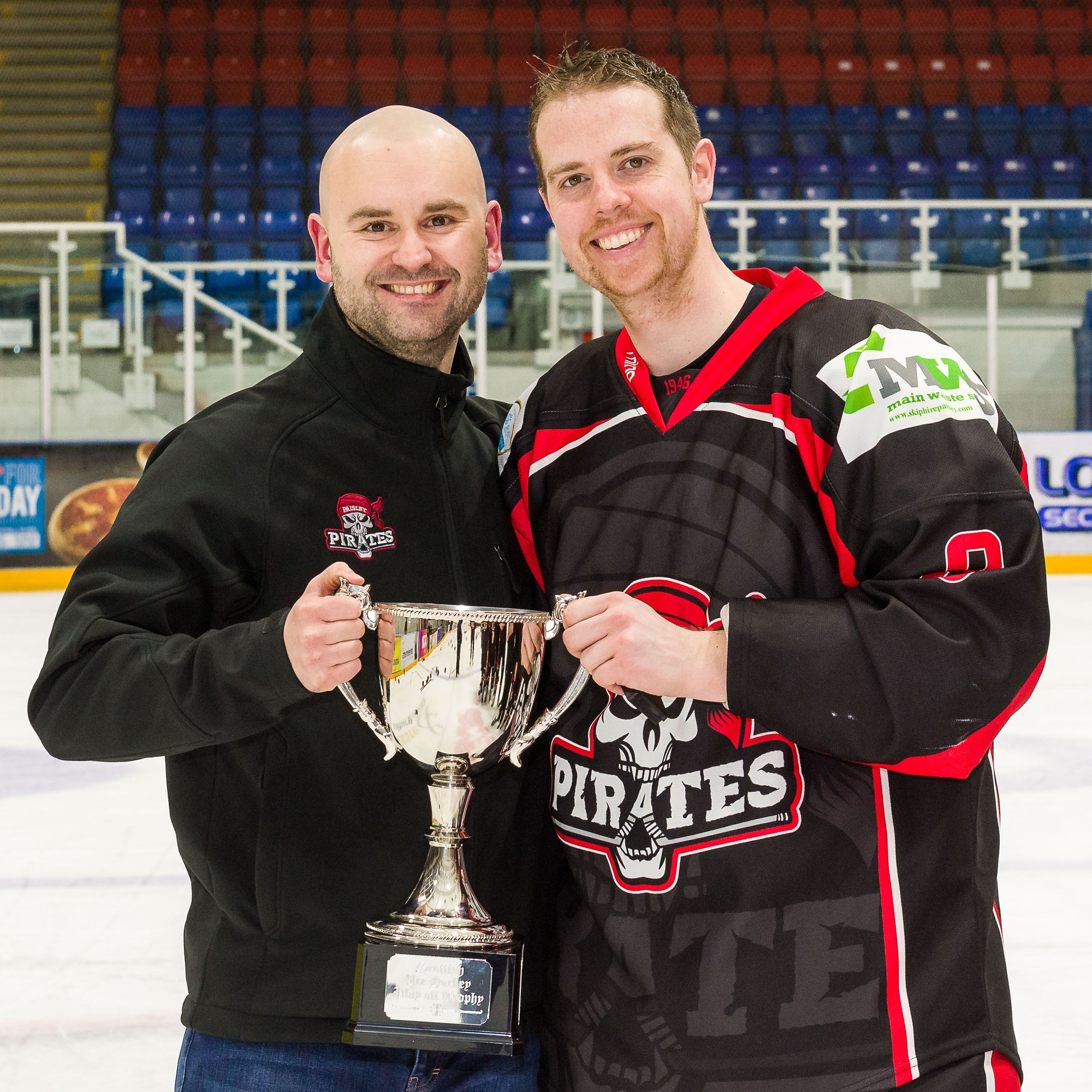 After the match, Head Coach Ian Turley commented, ”It’s hugely satisfying to be the first team to beat the Racers this year. We’ve beaten Edinburgh/Murrayfield 3 times in recent years in major finals, all of them without losing a goal.”

Player/Coach Adam Walker said, “It was a fantastic weekend. We knew coming into it we were peaking at the right time, so to come in and get the job done on back to back nights against two of the best teams in the league is a huge achievement. We knew that Murrayfield had a lot of fire power and a solid all round game and to have as much success as we did is a massive credit to the players and the way they carried themselves.”

“History has been made at the club and we couldn’t have hoped to do it with a better bunch of guys.”

All Photographs courtesy of Al Gould.