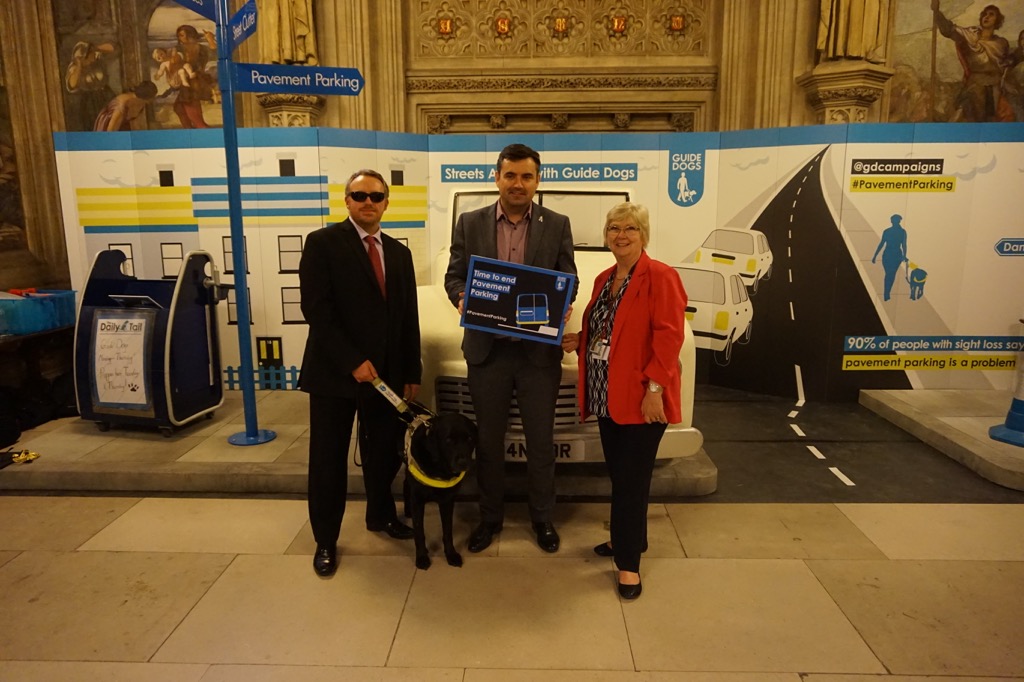 Gavin Newlands, MP for Paisley and Renfrewshire North, visited a street scene set up in the UK Parliament last week by the charity Guide Dogs to learn more about the challenges that people with sight loss face when walking the streets.

At the event, the MP for Paisley and Renfrewshire North dodged a pavement parked car, stumbled across a variety of street clutter, and visited a “shared space” area lacking safety features such as kerbs and pedestrian crossings. They heard from guide dog owners that dealing with these obstacles can leave them scared and reluctant to go out.

According to a Guide Dogs survey, 97% of blind and partially sighted people have encountered obstacles on the pavement. The most common obstacles were cars parked on the pavement: 9 out of 10 have had problems with pavement parking. Pavement parked cars force pedestrians into the road to face oncoming traffic. This is particularly dangerous for people with vision impairments, parents with pushchairs, wheelchair users and other disabled people.

In separate research by YouGov for Guide Dogs, two out of three drivers (65%) admitted having parked on the pavement and nearly half (46%) were confused by the law on pavement parking.

Guide Dogs is campaigning for a law to make pavement parking an offence, except on streets where local authorities agree that it is safe for pedestrians. This is already the case in London, but elsewhere across the UK, councils struggle to tackle unsafe pavement parking.

“No one should be forced to risk themselves in traffic because of obstructions on the pavement. I have heard from my constituents how cars parking on the pavements and other obstructions affect people from all backgrounds, particularly disabled people, the elderly and those with prams.

“I welcome the plans to introduce a law in Scottish parliament which will hopefully end the problem of pavement parking. We should all be able to walk the streets without being obstructed by cars parked on pavements.”

“Too often, our streets can be cluttered with dangerous obstacles for blind and partially sighted people.

“The worst offenders are cars parked on the pavement. If you have a vision impairment, pavement parked cars aren’t just a nuisance, they can force you to step out into the road and put you in real danger.

“In most parts of the UK, the law on pavement parking is unclear and difficult to enforce. We want pavement parking to be the exception so pedestrians can rely on their path being clear. When drivers themselves don’t know the rules, that is a strong sign the law needs to change.

We welcome the Scottish Government’s commitment to tackle this serious problem, and are pleased to see the publication of the Transport Bill which includes restrictions on pavement parking.”