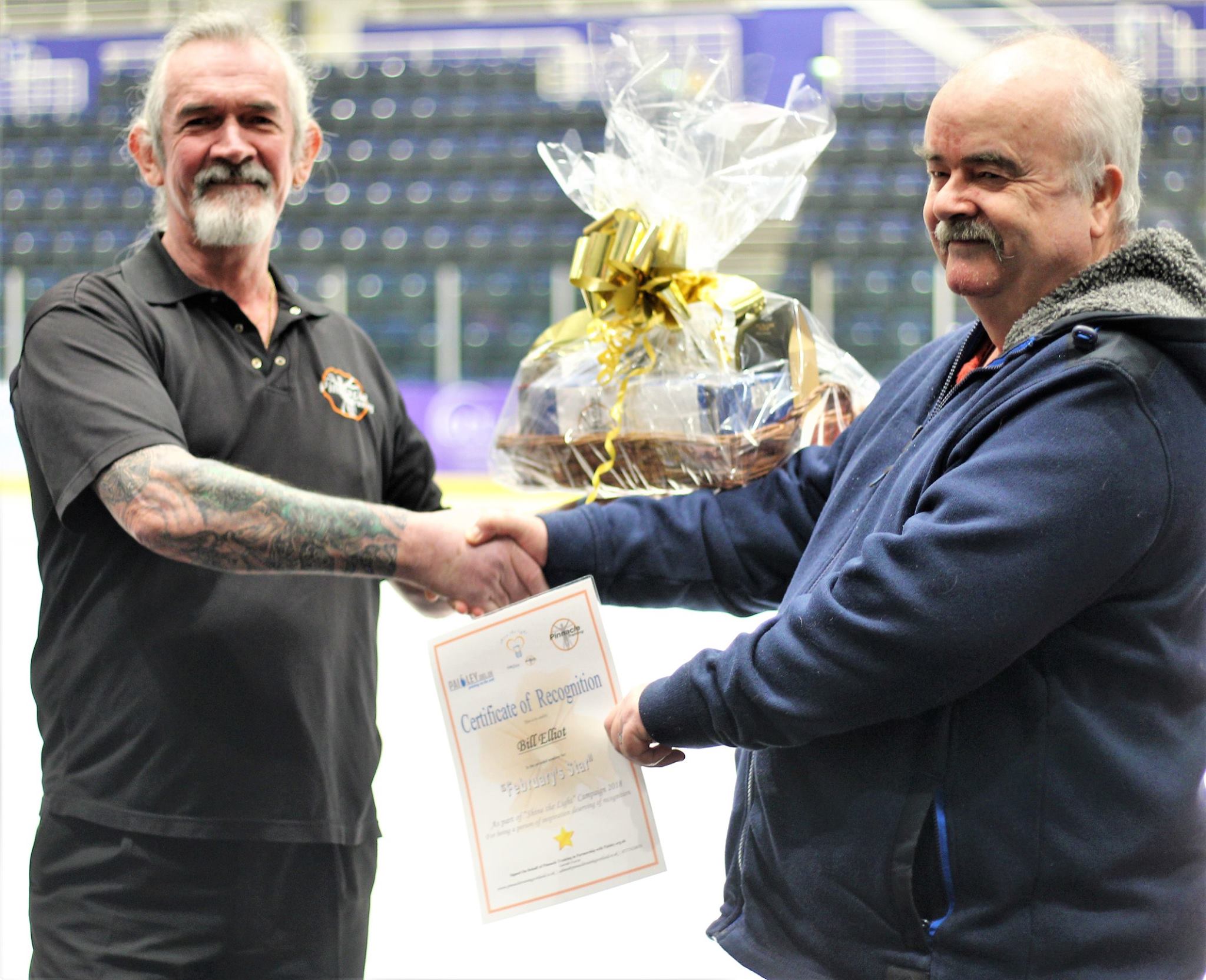 In partnership with Pinnacle Training, February’s Shine The Light is Bill Elliot.

Bill Elliot, 64, of Houston was nominated by friend and fellow supporters club chairwoman Marie Cadenhead, for his outstanding voluntary contribution to Paisley Pirates. Bill was presented with his award in front of an audience of Paisley Pirates fans, club members, and players, as well as his his wife and son.

Paisley Pirates Ice Hockey club is a non-profit sporting organisation run by the Turley family on a voluntary basis.
Bill is credited with spending his own time producing match reports and promotional material for the club, often working late into the night, as well as having an active role in the Supporters Club as former Chairman and Secretary.

Bill has been volunteering for several years, from the Pirate’s home in the Lagoon Leisure Centre to their new home in Braehead Arena.

The Paisley Pirates were founded in 1946 and are one of the oldest hockey clubs in Scotland and the UK. As well as receiving prestigious awards such as Volunteer of the Year 2015 Renfrewshire Community Sports Awards, Team of the Year 2016 Renfrewshire Community Sports Awards, as well as recently receiving the Provost’s Community Award – Sporting Achievement. They are an asset to Paisley and Renfrewshire, something Bill is keen to see continue, as evident with his volunteering, fund raising and promotional work.

Bill’s interest in the sporting community extends beyond just Ice Hockey, as he was highly involved with the Paisley Lions. Paisley Lions were a motorcycle speedway team that participated in the British National League in 1975 and 1976, based at Love Street in Paisley.

Despite having to take a step back in recent years due to family commitments and personal illness, Bill is still a driving force in maintaining and promoting the club.
Jackie Turley, Paisley Pirates Club Secretary said “Bill is a stalwart of the club and at times has been a vital part of the Pirates’ operation. He has went above and beyond to ensure the club is successful both on and off the ice and there’s no task he won’t undertake. Bill constantly keeps us in the public eye.”

It is because of people like Bill that organisations like the Paisley Pirates flourish, creating opportunity, growth and positive attention to Renfrewshire. It is those inspirational people in our community such as Bill Elliot that we should recognise and we are only too pleased to award Bill the title of Shine The Light – Mr February, as presented by Jim Furie, Managing Director.

Anyone wishing to support the Paisley Pirates can do so by contacting paisleypirates@gmail.com