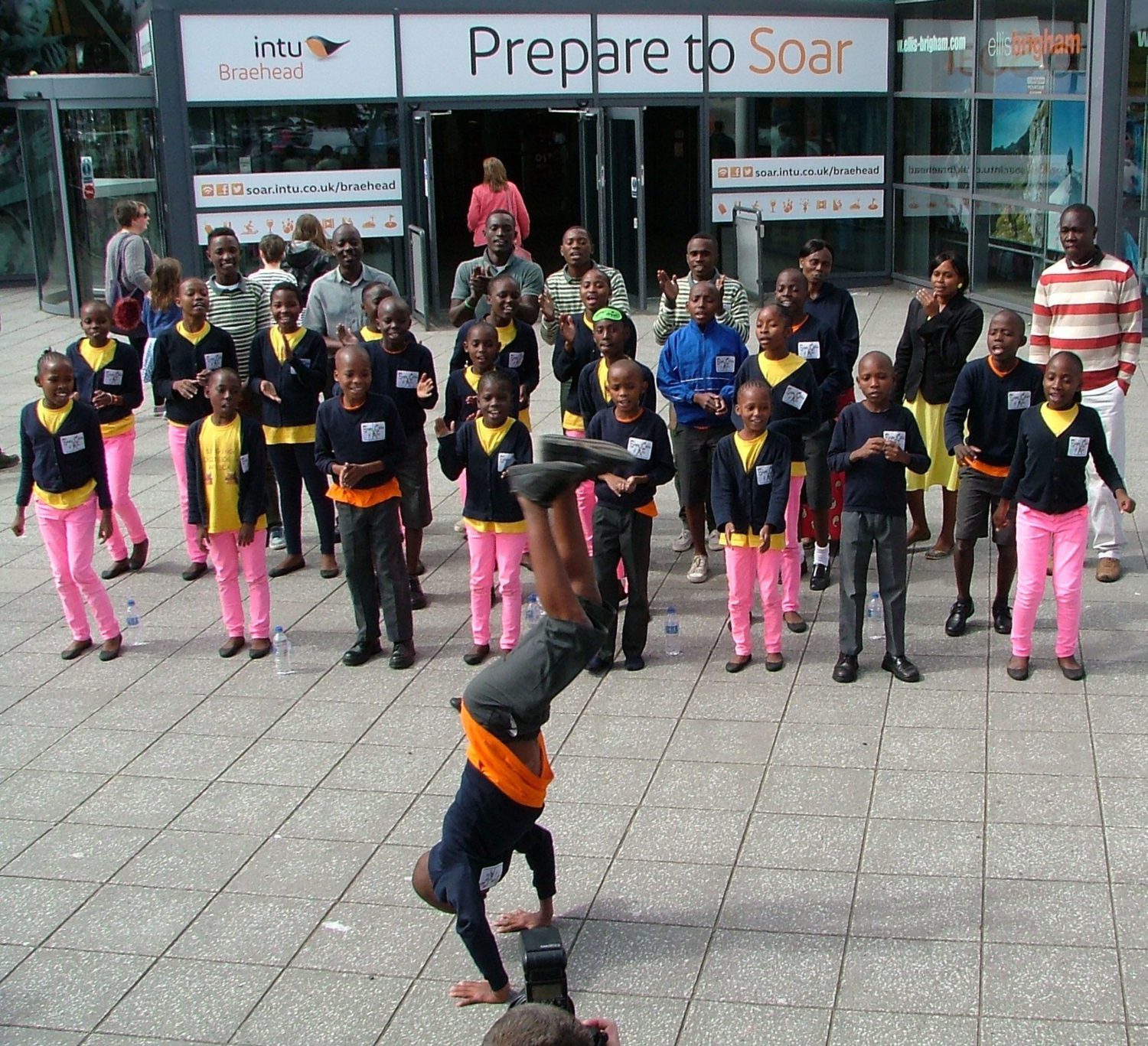 A CHOIR of African children sang for their supper before being given a free slap-up meal at the Soar at intu Braehead leisure destination.

Big-hearted bosses at the venue, near Glasgow organised for the 31-plus members of the Singing Children of Africa choir to have the meal at Chiquito’s followed by fun sessions courtesy of Paradise Island Adventure Golf and the chance to see and feel snow for the first time at Snow Factor.

The nine-week UK-wide singing tour by the youngsters from the poverty-stricken village of Utange, in Kenya – which begins this week with their first major concert in Renfrew Town Hall, on Friday night (May 29) – aims to raise thousands of pounds for the Educate The Children charity.

The charity has built and finances the running of a school and orphanage in Utange, to the north of Mombasa.

And shortly after flying into Glasgow Airport, on Saturday the youngsters – aged between eight and 14 – gave an impromptu concert outside Soar at intu Braehead with some added acrobatic entertainment from 13-year-old Ramadhan Omar.

Educate The Children voluntary organiser, Mike Baldwin said: “We really appreciate what Soar at intu Braehead have done for the kids as it’s a great way to start their hectic tour.

“The members of the choir come from really poor backgrounds as they live in mud huts at home. Many of them will never have been out of their village and won’t have seen a car until they landed in Scotland.

“The poverty they suffer is terrible and no one should have to live like that.”

The youngsters will be singing in town halls, schools, old folks homes up and down the country with donations being made by the audience at each performance.

“The money people donate during the concerts will make a huge difference to the lives of these children. Many of the children’s parents and grandparents didn’t get an education and we are trying to break that cycle of not going to school.

“And bringing over to this country makes them see that if they can work hard at school and get good results they can go on to get good jobs and get themselves out of poverty.”

Acrobatics pic – The Singing Children of Africa gave an impromptu concert outside Soar at intu Braehead and 13-year-old Ramadhan Omar provided some extra acrobatics to the performance.

Sing 1 and 2 pic – The Singing Children of Africa give an impromptu concert outside Soar at intu Braehead.

Golf pic – Children from the choir enjoyed their visit to the Paradise Island Adventure Golf and met the mascot, Maggie McCaw.

Snow pic- Children from the choir had never seen snow before they visited Snow Factor, at Soar at intu Braehead.