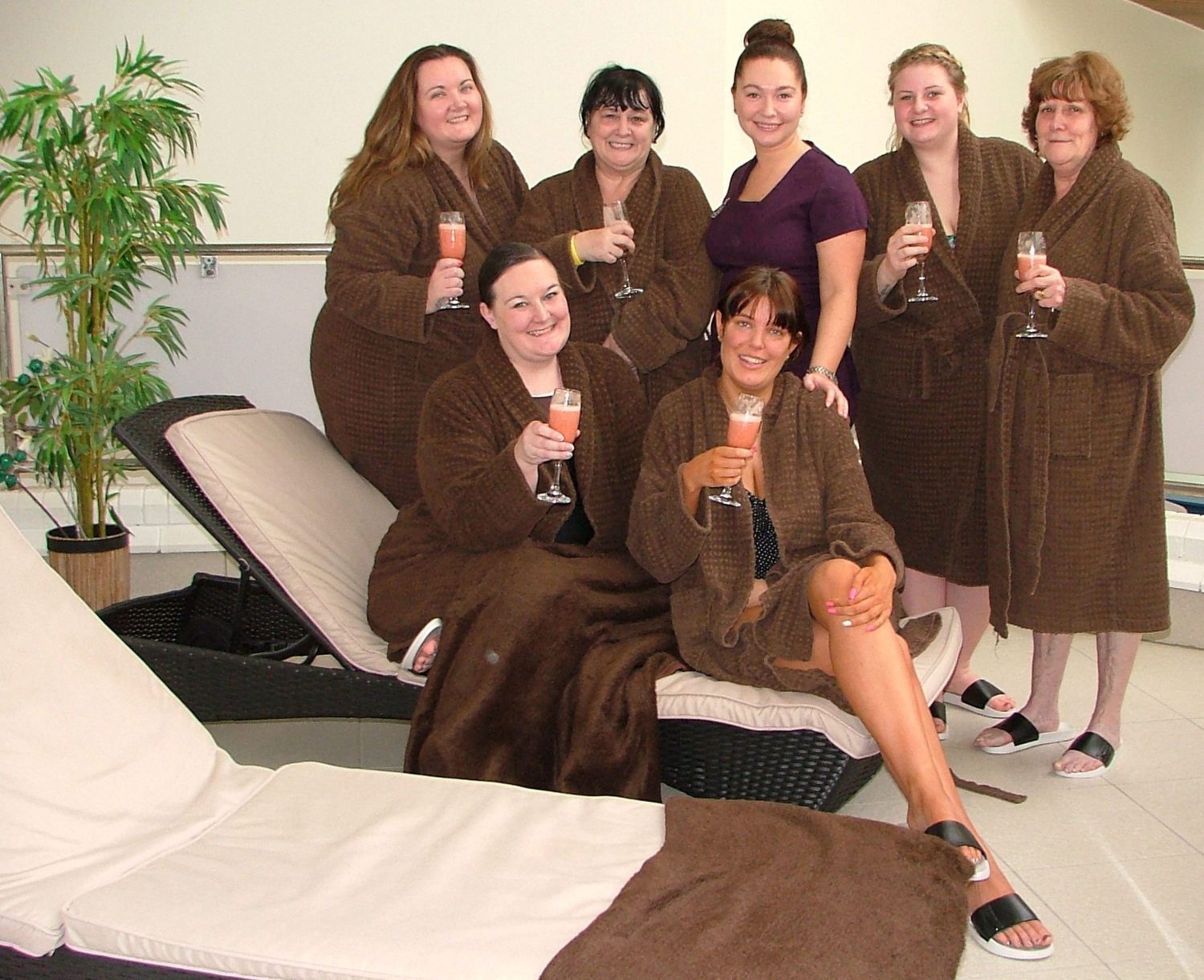 A WOMAN who has been diagnosed with terminal cancer ticked off one of her Bucket List wishes when she was given a pampering session at a top spa.

Gayle Chestnut McElhinney, 35, and a handful of friends were treated to free treatments at EVE Spa, at Paisley’s Lagoon Leisure Centre after bosses there heard that was one of the things Gayle wanted to do.

The mum, from Houston, in Renfrewshire has been told cancerous tumours have spread and there is nothing more docs can do to remove them, but she has recently started a new course of chemotherapy in a bid to shrink the tumours and give her more time.

Now Gayle, who refused cancer treatment to look after her terminally ill son until he tragically passed away, aged 12, has created a Bucket List of dreams she would like to fulfill before she dies.

Gayle explained: “I just love to have a spa day with the girls and get pampered. It’s one of my favourite days out with my friends.

“My friends have been fantastic and I’d never have managed it without them.
“So this day out is as much for them as it is for me.

“I really enjoyed the Thermal Experience at EVE Spa and spending time relaxing with everyone.”

Gayle has a genetic condition called Li-Fraumeni Syndrome (LFS) that highly increases the chances of having cancer.

She was diagnosed in 2008 with breast cancer and after a courageous fight, she beat the disease and entered remission.
However, in July 2012 her youngest son Kane, then aged ten, was diagnosed with liver cancer after inheriting the LFS gene. Following a brave 17-month battle with the disease, Kane passed away – just four days after his twelfth birthday.

During Kane’s fight Gayle was advised to undergo a double-mastectomy to help decrease her chances of the disease returning. She refused and used all her energy to care for Kane and enjoy every moment.

In June 2013, Gayle finally had the operation but just months later in November 2013 Gayle was told that tumours had spread to other parts of her body.
After receiving a terminal diagnosis shortly before Christmas, Gayle’s partner Robert decided it was about time they finally married. On February 3rd this year the couple tied the knot and the first wish of her Bucket List was achieved.

As well as a spa day with friends, Gayle’s bucket list includes seeing her other son, 17-year-old Daniel pass his driving test, to stay in a castle, go to Choccywoccydoodah designer chocolatier, one last family holiday, enjoy one last summer, have lots of garden parties, have a big charity event and get the chance to tour the Tunnock’s tea cake factory.

Lynne Dill, manager at EVE Spa said: “When we were contacted by one of Gayle’s friends, we had no hesitation in inviting them in for a few hours of luxury relaxation and spa treatments.
“After all that Gayle is going through and has gone through in the past few years, it’s the least we could do and I’m glad Gayle and her friends enjoyed themselves so much.”

Glasgow News? Daily Updates part of our network
A Tale of Secrets, Storytelling and Sibling Rivalry at Paisley Arts Centre

The older people of Paisley get their say
Scroll to top