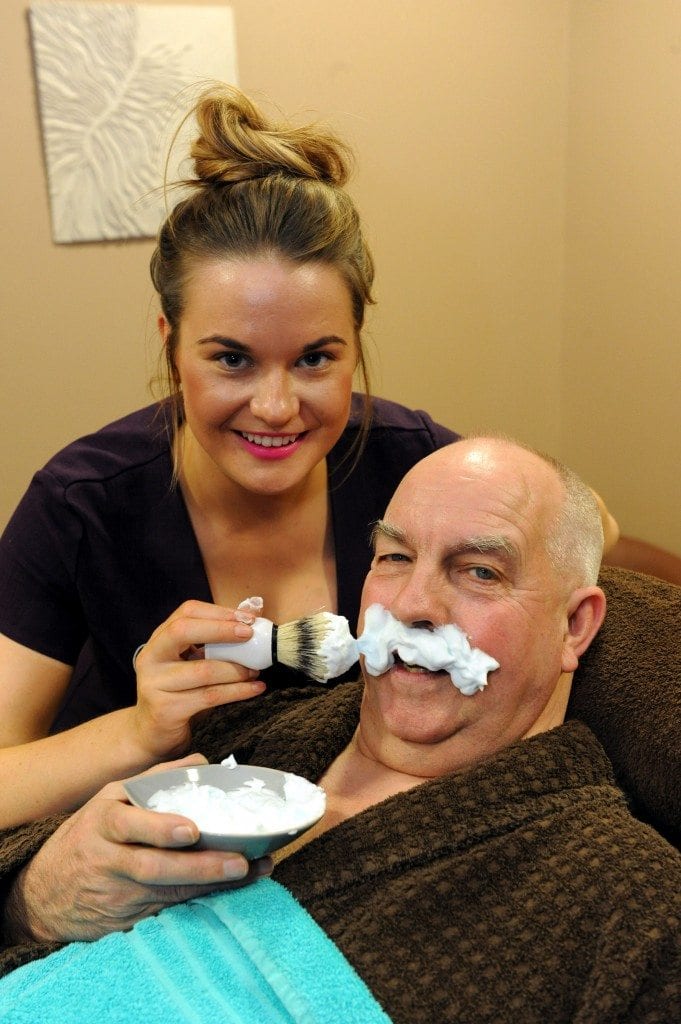 It was a ‘close shave’ for Renfrewshire’s Depute Provost John Caldwell on a recent visit to the EVE Spa in Paisley’s Lagoon Leisure Centre.

Cllr Caldwell, proud owner of a moustache for the past thirty-five years, decided to do a ‘reverse Movember’ and shave his OFF to support the popular campaign which raises awareness of male cancers.

Step forward, the staff of EVE Spa at the Lagoon, who offered to do it for him with the promise of a facial treatment to help him recover from the trauma of being moustache-less for the first time in years!

Cllr Caldwell said: “For almost all my married life, I’ve had my moustache. In fact, the only other time I’ve been without one, I actually shaved it off for charity!

“I just looked around and saw all this moustache-growing and realised I wanted to do my bit. Men are really bad at doing something about their health, so I wanted to do anything I could to help raise awareness and funds, even if it’s just a bit of fun.

“I’d like to thank the EVE Spa for helping me out with the shave and the facial. It’s a really stunning place and a real asset to the local area, I’d recommend everyone try it out.”

Joyce McKellar, chief executive of Renfrewshire Leisure, said: “What Depute Provost Caldwell is doing for Movember is certainly a bit different – instead of growing a moustache he’s taking his off!

“The staff at the spa were very gentle with him when they shaved off his moustache and they gave him a nice facial afterwards.

“I hope people support the Depute Provost’s efforts for the Movember charity.”

You can sponsor the Depute Provost now on the Movember website at MoBro.co/johncaldwell497

EVE Spa has a number of treatments, gift vouchers and membership deals available for Christmas. The sales team is available on 0300 300 0266.

Glasgow News? Daily Updates part of our network
Johnstone is lit up at Christmas event

Renfrewshire Businesses helped to get Ready for Winter
Scroll to top