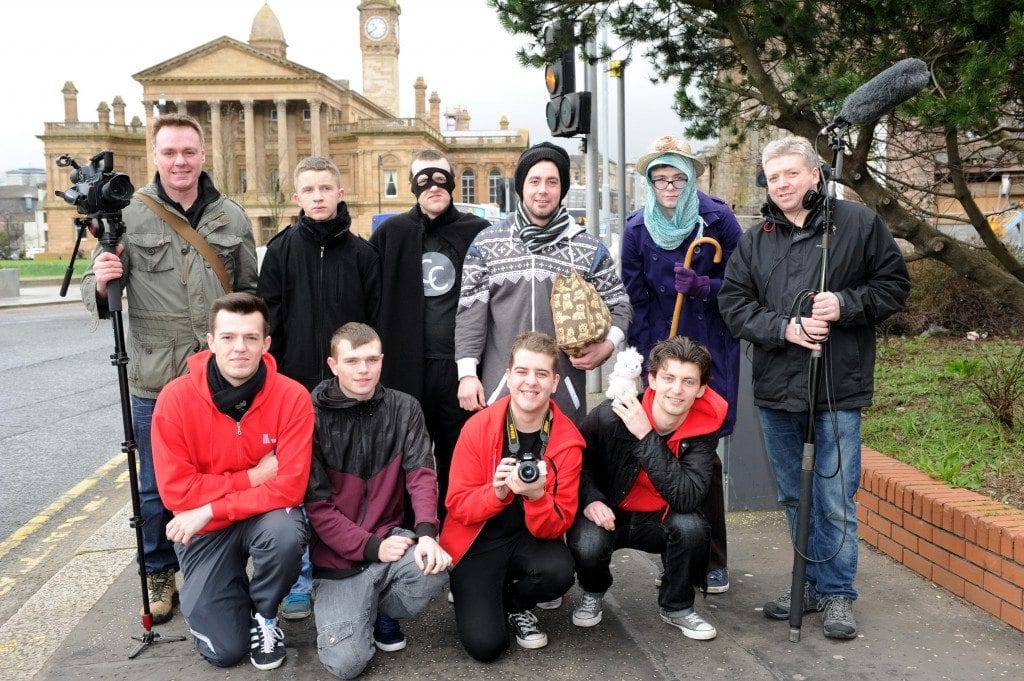 A group of young people on a popular youth employment programme turned moviemakers for a day to shoot their own superhero-themed fire safety film.

The lights, camera, action took place as part of the council-run Recruit programme for jobseekers, and saw participants devise, script, act and produce their own mini-movie.

The Recruit is loosely modelled on telly favourite The Apprentice and sees 16-24-year-olds take part in a series of business and practical challenges, with job opportunities on offer for the winners. The challenge was set by local training firm Code Red Fire Safety, who visited the Recruits to offer tips on staying safe in the home, and asked them to produce the film.

The 38 Recruits were split into five teams and asked to pitch their ideas, with Team Tenacious chosen as the winners and asked to make their film, assisted by Glasgow production firm Baby Grand.

Their winning idea sees a superhero – Captain Courageous – saving a cat from a tree and an old lady from two muggers, then is caught in a blaze at home caused by leaving his phone charger plugged in – showing even heroes aren’t safe from fire.

Filming took place around Paisley town centre with the completed video to be premiered during the finale of the current Recruit programme, in Paisley Town Hall on March 26.

Recruit Connor McCuaig, 18, from Paisley – who plays the old lady mugging victim in the film – said: “The Recruit is a fantastic programme. It opens doors for you, you do new things and meet new people. It’s also a lot of fun.

James McMahon, director of Code Red Fire Safety, said: “We have been involved with The Recruit for a couple of years now, and it is a pleasure to work with the young people.

“We wanted to set them a task around a fire safety theme which would let them get creative – the video has a serious message but was a lot of fun to make as well.”

Councillor Roy Glen, convener of the council’s Economy and Jobs Policy Board, said: “The Recruit has been in operation in Renfrewshire now for four years and has now seen hundreds of young people develop their skills in a uniquely rewarding and enjoyable experience. “Once again, we would like to thank all the local companies who have provided sponsorship and helped run challenges as part of the programme, as their expertise and support is invaluable.”

The current edition of The Recruit has been running since January and includes a mix of unemployed youths and winter school leavers.

Organisations which have helped run challenges on the programme so far include Tennent’s training academy, the Territorial Army, NS Design, Renfrewshire Chamber of Commerce, Phoenix Car Company and RBS

The Recruit will be back in June with the summer edition, which will feature S5/6 school pupils from across Renfrewshire.