PROVOST Lorraine Cameron was almost moved to tears as she sat in the audience watching the world premier of the latest John Byrne play Underwood Lane.

And she revealed the reason she became so emotional was that particular street in the west end if Paisley was where her parents had their first home – moving in just weeks after she was born. 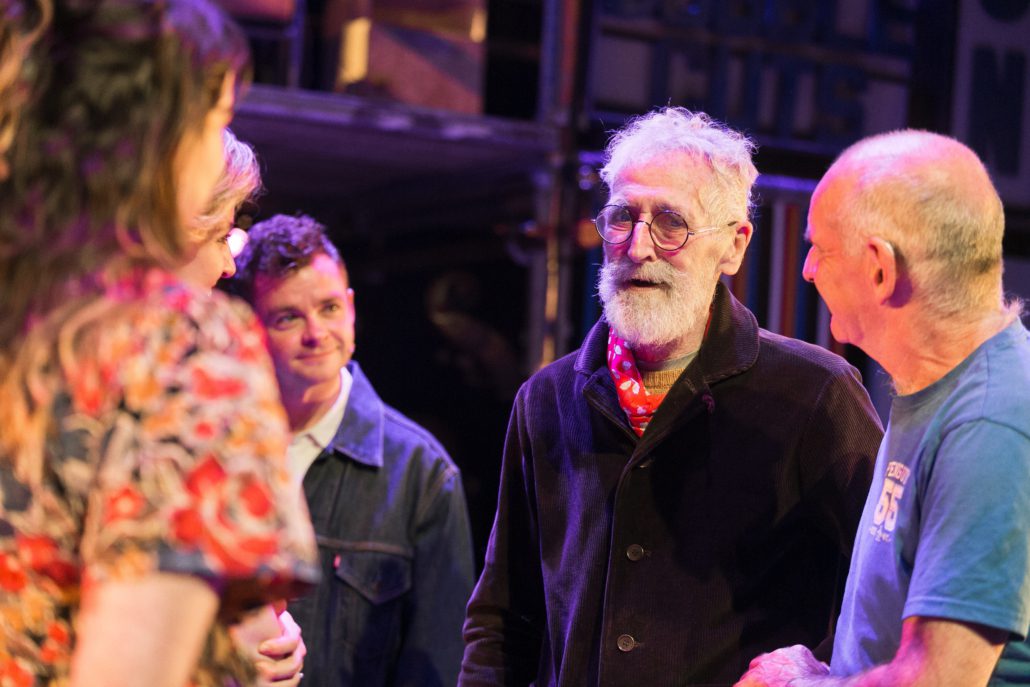 The play is in memory of Byrne’s long-time friend and fellow Paisley Buddie, Gerry Rafferty, who died 11 years ago, but was born and spent his early years living in Underwood Lane, in the town.

The Underwood Lane show sold out all its performances at Johnstone Town Hall, on Thursday, July 7, 8 and 9.

The show is a co-production between the Tron Theatre Company and OneRen – the local charitable trust providing cultural, leisure and sporting opportunities to help people enjoy active and healthy lives.

It’s set in the late Fifties and early Sixties telling the story of pals, Dessie, Donnatella and Joey, who form a skiffle band and try to make the big time. It’s also a tale of fierce love rivalry, broken hearts, dodgy dealing, sex and death.

“My mum and dad moved into a tenement flat in Underwood Lane when I was just a few weeks old and we stayed there for about a year and a half.

“Watching the play and hearing the characters talk about Underwood Lane, I was imagining my mum and dad carrying me through the door and into their first home and how exciting it must have been for them.

“It was quite emotional for me sitting in the audience watching the show because it took me back in time and I was imagining what life would have been like for my mum and dad in the late 50s and early 60s.”

Provost Cameron added: “What a night this has been. That was a brilliant performance.

“We’ve just had a world premier of a John Byrne play and I can hardly believe it has happened. It’s the most exciting event in our calendar this year

“We’re very committed to the arts in Renfrewshire.”

Singing star Paolo Nutini’s dad Alfredo – who runs the Castelvecchi fish and chip shop in Paisley, which has been in his family since 1914 – was in the audience and afterwards he said: “I thought the show was absolutely brilliant. There were a lot of talented people on that stage.

“Underwood Lane has a great storyline that I could relate to since I come from Paisley and have lived here all my life – well done, John Byrne!”

Television actor, Scott Fletcher, who is seen every week in the River City drama and also starred in Gary: Tank Commander played the character, Joey in Underwood Lane.

“It’s a great theatre, the acoustics are good and it was brilliant to be back in front of a live audience after two and a bit years.”

Chair of OneRen, Councillor Lisa-Marie Hughes said: “It was a spectacular night, and great to see Johnstone Town Hall transformed into a theatre venue for the world premier of Underwood Lane.

“There was a brilliant atmosphere, and particularly as many in the audience were from the local area, they related to the references John Byrne makes to places in Paisley. The local connection really drew us into the story and the cast’s performance made for an unforgettable night.”

Following the performances at Johnstone Town Hall, the show, directed by Andy Arnold, moves to the Tron Theatre, in Glasgow for a run between July 14 and 30. Underwood Lane is supported by Future Paisley, the wide-ranging programme of activity led by Renfrewshire Council, which aims to use Paisley’s rich cultural story to transform its future.

John Byrne pic: Artist and playwright, John Byrne with some of the cast of Underwood Lane. Photo by Eoin Carey.

Glasgow News? Daily Updates part of our network
Merits and demerits of NFTs for investors!

Why Have Online Casinos Become So Popular?
Scroll to top
Go to mobile version