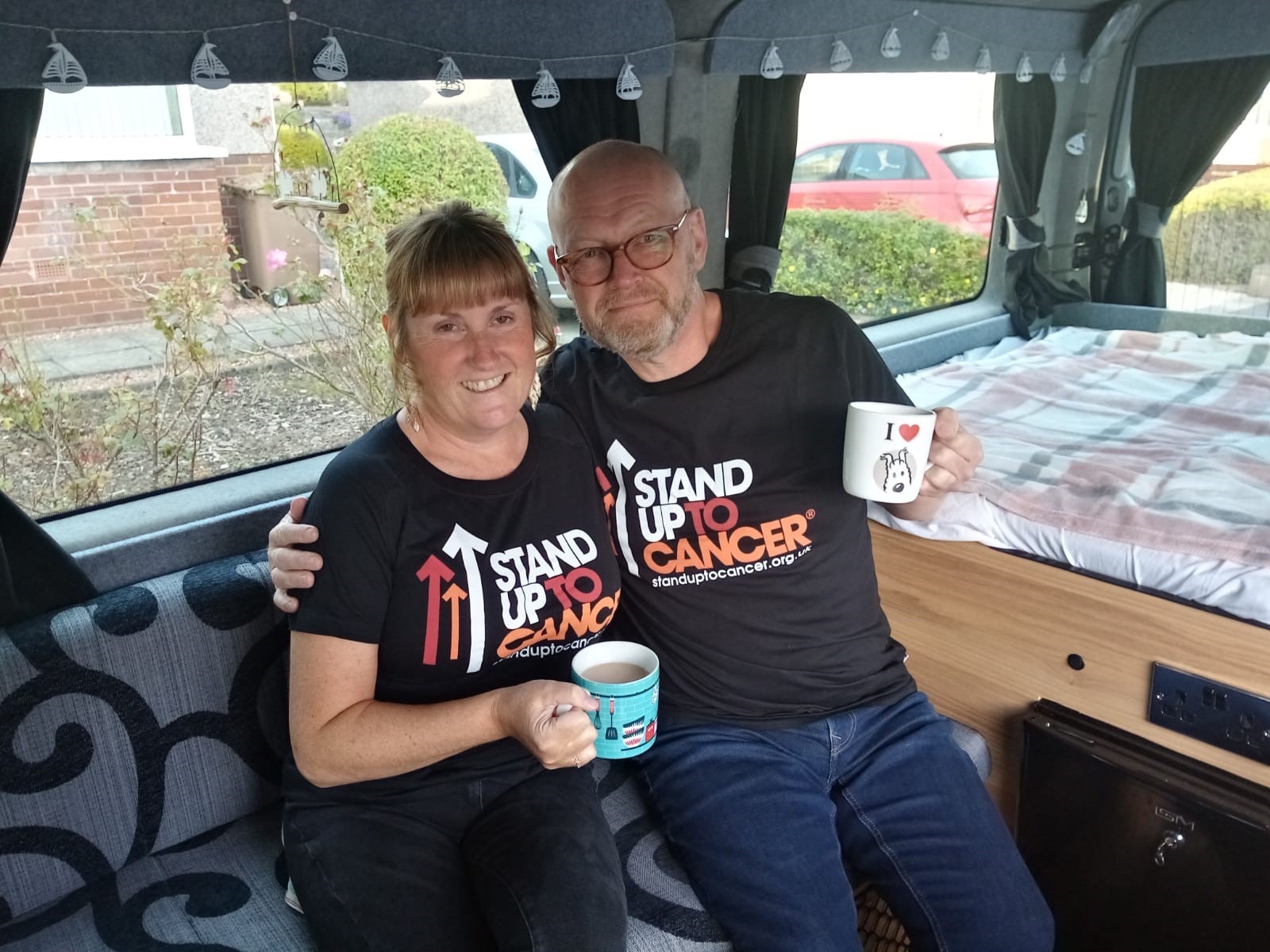 A PAISLEY couple who say they both owe their lives to cancer research have celebrated their survival by holding a special Stand Up To Cancer brunch in their dream camper van.

Linda and Gordon Robertson are urging Scots to turn up the heat on the disease this October by preparing a fundraising feast.

Bowel cancer survivor Gordon Robertson and his wife Linda, who are about to celebrate their 20th wedding anniversary, first met just after Gordon lost his first wife Val to breast cancer.

Linda, aged 48, who is herself recovering from breast cancer, says she owes her life to treatments that weren’t available when Val was diagnosed.

The couple are now calling on people across Scotland to join them and cook up some cash with a special Sunday Brunch for Stand Up To Cancer.

They’re urging foodies and fundraisers alike to create a restaurant-style experience at home by hosting a brunch bonanza for their household – with family or housemates donating the bill to life-saving research.

Stand Up To Cancer is a joint fundraising campaign from Cancer Research UK and Channel 4 which aims to get new cancer tests and treatments to people who need them the most.

The couple are stepping up to the stove because they know first-hand how important new discoveries and breakthroughs are to help more people like them survive.

It was a huge shock to Gordon and Linda when cancer hit them for the third time.

“When Linda went to the GP because of a lump in her breast, I wasn’t worried because it never crossed my mind that cancer could hit us for a third time,” recalled Gordon, aged 56.

“So when the tests showed it was cancer, I felt absolute disbelief. It was a massive shock.”

Gordon lost his first wife Val to breast cancer in 1997 when she was aged just 33.

The couple, who met at work at Glasgow Libraries, had been engaged for some time and they got married at home when Val’s health deteriorated – sadly just 19 days before she died.

Gordon said: “Val was a library assistant and I was working with Glasgow Libraries doing odd jobs when we met. We hit it off straight away and we were together for four years.

“When Val discovered a lump in her breast, she was only 31. We went for tests immediately and we thought we’d caught it early enough. But after treatment the cancer came back and had spread to her liver. It was devastating.”

Fifteen months later, a friend persuaded Gordon to go on a holiday to Tenerife. Gordon had been struggling with grief and his friend thought a change of scene might help.

It was there Gordon met Linda, in a nightclub where neither of them were enjoying the music.

Linda remarked to Gordon that it would have been better if the DJ had been playing The Smiths. Gordon is a massive Morrissey fan and the pair bonded.

They left the nightclub and walked the streets talking about their lives and singing Smiths songs. Gordon opened his heart to Linda about his heartbreak over Val.

Linda decided that Gordon was not ready for another relationship and so the pair parted ways.

However, on return to Glasgow, Gordon got back in touch with Linda and persuaded her to go on a date with him. Six weeks later, they moved in together and they were married in October 2000.

Linda recalls: “Gordon was going through such a tough time, I didn’t think he was ready for another relationship. But when we got to Glasgow he got back in touch and took me for dinner and after that we pretty much became inseparable. It wasn’t long before I met Val’s sisters and they gave us their blessing which meant so much and really helped Gordon to find happiness again.”

On 19 October 2000, Gordon and Linda were married at the Park Circus building in Glasgow in front of 60 friends and relatives.

Ten years later, the couple had to face a second significant hurdle, when Gordon was diagnosed with bowel cancer.

Gordon said: “Being told you have cancer immediately changes your life. And after what had happened to Val, of course I worried about the consequences. But I also really believed I was going to beat it. And having Linda by my side was a huge support.”

Gordon’s bowel cancer was caught early and this year he’s celebrating ten years of being free of the disease.

But another bombshell hit the couple in August 2015 when Linda discovered a breast lump.

Linda recalled: “I really didn’t think it was anything to worry about and so I didn’t even take Gordon with me when I went for the test results. So when the diagnosis came, it was a real bolt from the blue. I couldn’t believe it. How could cancer hit us for a third time – first Val, then Gordon and now me.”

To make sure her body was lined up in exactly the same position to receive all her radiotherapy treatments, radiographers made pin-point sized tattoo marks on her skin.

In a bid to turn these lasting marks into something positive, and to aid her mental recovery, Linda turned the marks into a bumble bee tattoo, alongside the words Bee Positive. Gordon has a matching tattoo on his arm.

Linda said: “While Gordon is such a positive person, I can sometimes be ‘glass half empty’. I sometimes dwell on the worst-case scenario and worry that the cancer will return. The tattoo is to remind me that I’m still here, Gordon is by my side, and we have lots to look forward to in life.”

Since their marriage, Gordon and Linda have indulged in a love of travel, particularly to Spain. It was their dream to buy a camper van when they retired but, with the pandemic halting travel plans, and in celebration of their 20th wedding anniversary, the pair decided to make the investment this summer.

Since buying the van, they’ve travelled all over Scotland and enjoyed a summer holiday to Wales. They are also planning a more local camping trip in the van to celebrate their wedding anniversary.

Linda said: “We’re really doing what we can to live our best life. You’d think with Gordon going through one tragedy, that would be his fair share. But that’s not how it works. We’ve been through so much together but we’re stronger and closer for it.

“When we decided to buy the campervan – which has been our dream for so long – we just thought ‘life’s too short to wait’. We love being out and about in it and preparing for each of our camping trips really makes my heart sing.”

She added: “I know that I have survived cancer because I received treatments that perhaps weren’t around when Val was diagnosed with cancer.

“Cancer affects every family and so it’s so important that scientists have the funding to find the causes and new cures. Supporting cancer research is something positive we can all do to make sure more people survive.

“With charities having been hit so hard by the coronavirus outbreak, it feels more important than ever for everyone to do what they can.”

In Scotland, around 32,400 people are diagnosed with cancer every year*. That’s why Gordon and Linda are calling on people across the country to sign up for a free fundraising kit now with everything they need to turn their home into an exclusive brunch spot.

Supported by Channel 4 show Sunday Brunch, an array of celebrity chefs – including co-host Simon Rimmer – have donated recipes. From Davina McCall’s kedgeree, to Jamie Oliver’s super spinach pancakes and Asma Khan’s courgette sabzi – there’s something to suit everyone’s taste buds. Or participants can simply choose to conjure up their own culinary creations.

Linda Summerhayes, Cancer Research UK spokesperson in Scotland, said: “We’re grateful to the Robertsons for helping us to continue our mission. Cancer doesn’t stop in the face of a pandemic. It can affect anyone’s life, at any time so we only have one option: accelerate life-saving research.

“Thanks to the extra time spent at home lately, many of us now know our way around the kitchen much better than before. So why not put these new-found culinary skills to use while inspiring guests to dish up the dosh for a great cause.

“Cooking a special Sunday brunch for your household is a safe and simple way to show support during these challenging times. By taking part you’ll be rewarded with more than just empty plates. The donations your family or housemates make in support of your efforts really could save lives.”

For added inspiration, during October four special episodes of Sunday Brunch will be shown on Channel 4 showcasing some of the delicious Stand Up To Cancer recipes.

Get a free fundraising kit at su2c.org.uk/brunch. A Sunday Brunch mug is also available from Stand Up To Cancer’s online shop.

Serve with a poached egg

Glasgow News? Daily Updates part of our network
Everything Brands Need To Know About Tiktok In 2020

Dermal Fillers and Lip Fillers and other treatments available at Aesthetic ...
Scroll to top