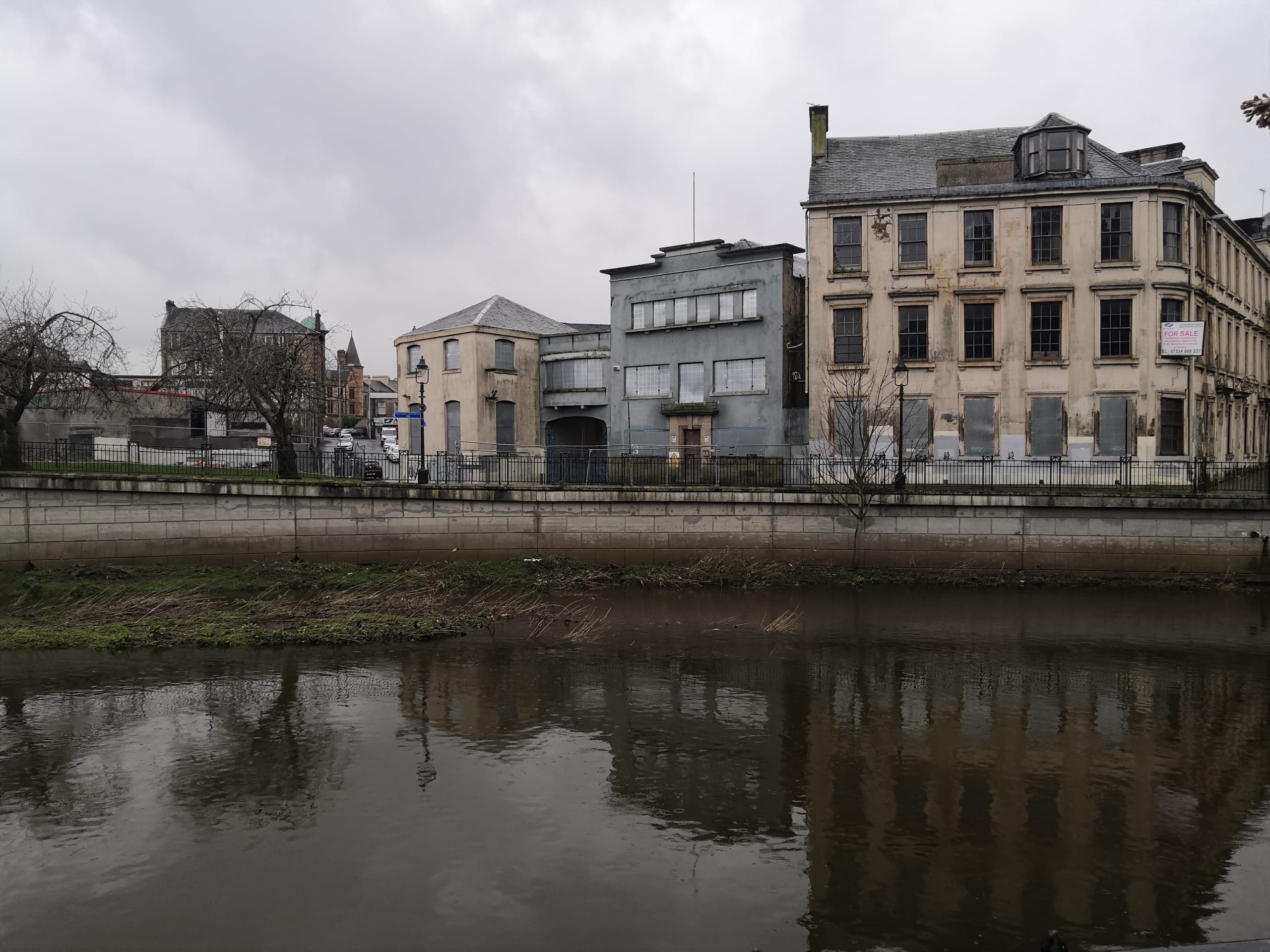 A prominent Paisley town centre site which has lain empty for a decade could be brought back into use as new flats – with a proposal to sell it to developers going to councillors next week.

The former council office at Kelvin House and adjacent building on Forbes Place occupy a prime spot overlooking the White Cart River but were last occupied in 2009 when social work staff moved out.

Members of the council’s Infrastructure, Land and Environment Policy Board will next week be asked to authorise the site’s sale to developers Nixon Blue, who plan to build flats and a commercial unit.

Nixon Blue already own the adjacent site – the now-demolished former Institute nightclub – and were last year granted planning permission to build 36 flats and a restaurant there.

The site they are now hoping to buy takes in the B-listed buildings at 16-20 Forbes Place, the old Paisley social work office at Kelvin House, and a former depot behind that in Marshall’s Lane.

Their initial proposal is to refurbish the Forbes Place building and convert the other two to residential. Any future development would be subject to the relevant planning consents being granted.

When a previous move to turn the site into a hotel didn’t come to fruition, the building reverted to council ownership and was readvertised for sale.

Nixon Blue recently completed 32 new flats elsewhere in the town at Old Sneddon Street – on the site of the former Carnegie’s nightclub.

The Kelvin House site forms part of an emerging Abbey Quarter which has seen hundreds of new residents in recent years in Link Housing’s development on the former Arnotts site, with more to come, and in the new flats built by Westpoint Homes on Cotton Street and Mill Street.

With great views across the river to Paisley Abbey and Town Hall, development there would complement the council’s current investment to turn Paisley Town Hall into a landmark entertainment venue and to transform Abbey Close as an expanded events venue and attractive place to gather.

Councillor Cathy McEwan, convenor of the council’s Infrastructure, Land and Environment Policy Board said: “Should councillors give approval to this sale next week, it could see another long-time vacant Paisley town centre building being brought back into use.

“Earlier this year, the council unveiled A Vision for Paisley 2030 – which imagined what the town centre could look like in a decade – and central to that was the idea of new town centre living bringing life back to Paisley by helping drive new footfall to the surrounding traders.

“The initial proposals for this site are an example of how that Vision could be delivered on over the years ahead, and the various other town centre housing developments we’ve seen in recent years are proof Paisley is now recognised by the private sector as on the up and a great place to invest.

“The major investment the council is already making in our venues and outdoor spaces over the next few years will only help build on that further.”

The Infrastructure, Land and Environment Policy Board will consider the proposed sale when they meet on Wednesday 18 March.