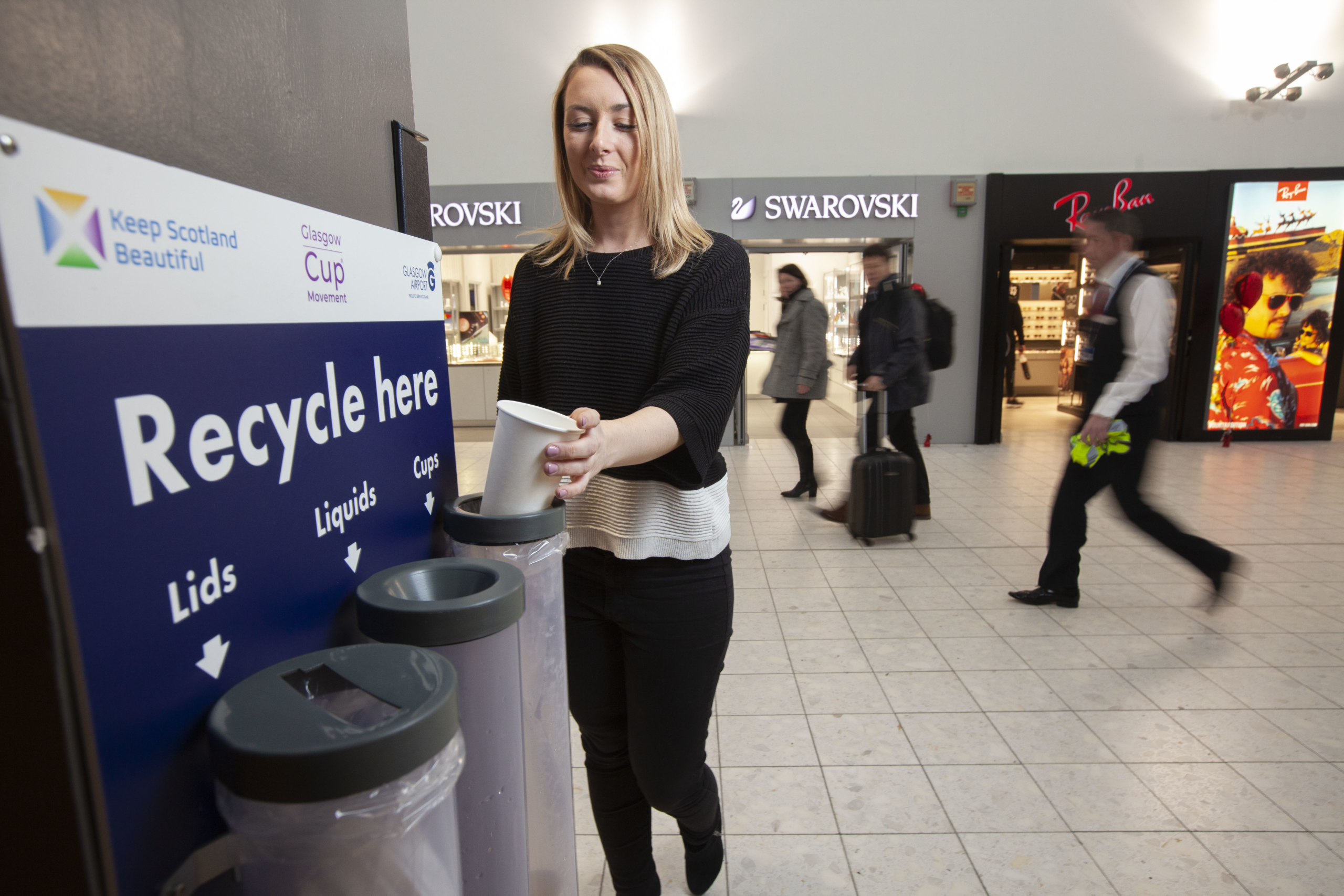 Glasgow Airport’s new recycling stations have arrived with a sustainable solution for the disposal of single-use coffee cups in the terminal.

Three stations have been introduced in the James Martin Kitchen, Panopolis and Starbucks catering outlets in the main departures area with a further four stations set to be installed.

The stations feature three collection tubes to allow passengers and staff to the recycle single-use coffee cups, lids and their contents where previously they could only be disposed of in general waste bins.

Glasgow Airport introduced the first station in James Martin Kitchen last summer and since its introduction more than 12,000 cups have been recycled.

Kirsty Webster, Glasgow Airport’s Sustainability Assurance Manager, said: “As a responsible business we are committed to reducing our environmental impact. As disposable cups are composed of paper with a thin plastic liner to keep them from leaking, recycling them requires a specialised process.

“The remaining liquid has also been a barrier to recycling as if there’s nowhere to hand to empty the contents of the cup, they are often tossed in the general waste bins.

“These stations provide both staff and our customers with the means to dispose of their leftover drink and the disposable cup in a sustainable manner and they are proving really popular.”

The new recycling stations were introduced as part of Cup Movement® in Glasgow, a city-wide initiative from environmental charity Keep Scotland Beautiful. It is aimed at reducing the waste associated with single-use cups through cross-sector reuse and recycling solutions. Glasgow Airport joined Cup Movement in the summer, gaining access to Scotland’s first cup collection and recycling service delivered in collaboration with Simply Cups.

Kirsty added: “We are proud to be part of the Cup Movement in Glasgow, which ensures that through the support of Keep Scotland Beautiful and Simply Cups we are able to make use of the appropriate collection facilities for the segregated cups used across the airport.”

It is estimated that more than 500 million single-use cups are used in Scotland each year with just 4% being recycled with the remaining amount either going to landfill or littering the country. Around 95 million are used in the Greater Glasgow area each year.

Paul Wallace, Campaigns and Social Innovation Manager at Keep Scotland Beautiful, commented: “Transport hubs like Glasgow Airport are a key part of our take-away coffee culture, with thousands of travellers reaching for a drink in a disposable cup each day, as they wait for their flight to board.

“We are delighted the airport has made a success of its cup recycling efforts and look forward to working with Kirsty and the team to further reduce single-use cup waste as part of our Cup Movement.

“Having an initiative like this in a key hub in and out of Glasgow helps send a strong message to locals and visitors alike about the importance of waste reduction. Every step counts as we transition towards lower impact ways of living.”

The introduction of the recycling stations is one of a series of sustainability-focused and waste management projects underway locally at Glasgow Airport.

Last year Glasgow Airport handed out reusable water bottles to over 5000 staff with the help of pupils from Sunnyside Primary School, known as the Ocean Defenders.

Thousands of pieces of crockery and cutlery that were no longer required by the airport’s Frankie & Benny’s restaurant and due for disposal were donated to Starter Pack Glasgow. The charity helps new tenants, many of whom were previously homeless, get started with household items they may struggle to afford when moving into a new home.

An unused airfield passenger bus that would have been scrapped was also donated to the charity Help the Homeless Glasgow to be converted into a mobile support unit.

To find out more about Cup Movement visit: keepscotlandbeautiful.org/cup-movement

Glasgow News? Daily Updates part of our network
How will Bitcoin Affect Casinos?

Is CBD a potent antioxidant? Let’s find out!
Scroll to top
Go to mobile version