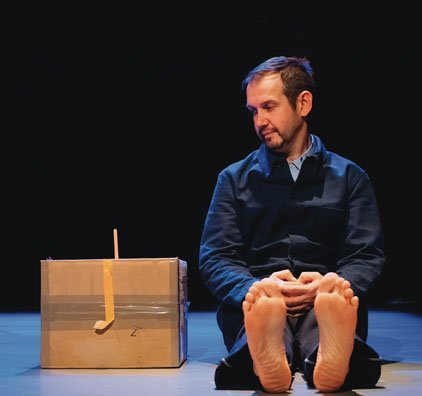 “Completely delightful. Children’s shows of this calibre are rare”

Andy Manley’s performance for young audiences, Stick by Me, is a quirky, non-verbal show about friendship and play, and the importance of treasuring little things. The show, created for children aged 3-6 years, and winner of the 2019 CATS Awards for Best Production for Children and Young People will be touring to Johnstone Town Hall.

Created by the duo behind the critically acclaimed play, White, Andy Manley and Ian Cameron’s new performance, Stick by Me, builds on their vast experience of creating work for very young children.

Alice McGrath, Creative Director at Red Bridge Arts said: “Stick by Me is a real celebration of friendship and children’s play. The creators, Andy and Ian, are experts in connecting with children’s humour and interests and presenting life back to them in an entertaining and thoughtful way. Hearing children and families responses after the show is always heartening and at the end the children are gifted their own Stick friend which brings a huge amount of joy to all”

Stick by Me was originally commissioned in 2017 by Gulbenkian Arts Centre for the Boing Festival, it then played the Edinburgh Fringe as part of the Made in Scotland showcase where it was a great hit with audiences and press. The show has been nominated for the 2019 CATS Award for Best Production for Children and Young People and has received rave reviews from audiences:

“Stick by Me is a charming and witty dance piece for all ages from Red Bridge Arts, commissioned by ACE and supported by The Gulbenkian, and is brilliantly performed by Andy Manley. Everybody in the audience, young and old, left Dancebase with a smile on their face – and a lolly stick.”

“Absolutely loved this and so did my 3-year-old. It’s beautifully crafted with great attention to the little details that make the difference between an okay show and something that’s a bit special.”

Stick by Me co-creator and director Ian Cameron has worked with and developed Andy’s physical performance and approach to non-verbal storytelling. Set design by Katherina Radeva supports the exploration of material and creation of an abstract world for the story to take place. Music and sound design by Will Calderbank and lighting design by Craig Fleming underpin the performance and bring a full, sensory world for audiences young and old to immerse themselves in.

Call 0300 300 1210 or visit www.renfrewshireleisure.com/whats-on to book for Thursday 26 September at 2pm at Johnstone Town Hall.