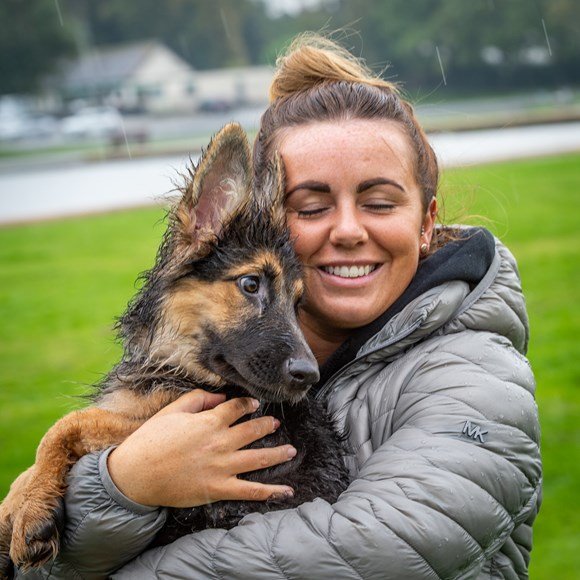 Determined dog owners braved the rainy conditions to show their support for the Team Up to Clean Up campaign at the first Pooches in the Park event in Barshaw Park.

Around 40 keen owners brought their furry companions along to the event which aims to promote responsible dog ownership in Renfrewshire.

Cockapoo Charlie led the way, with German Shephard puppy Max, Border Collie Bo and Angus the Poodle following his lead in the pack behind.

The dogs made their way on a lap of the park as they met not only each other, but swans, ducks and birds as the park’s wildlife enjoyed the wet conditions too.

Following the leisurely walk, there was an open dog training demonstration by St Mirin Dog Training Centre to give owners a taster of the skills and behaviours their dog can learn and ensure that all dogs are safe when out in public.

Denise Symon, St Mirin Dog Training Centre Owner, said: “Pooches in the Park was a lovely day out for all dog owners despite the rain.

“I think the fact that so many dog owners came out in pouring rain shows how committed dog owners in the area are to raising awareness of how important it is to clean up after your dog and raising a happy well trained pet.

“Roll on next time when I’m sure the sun will shine on us.”

Pooches in the Park took place during Spotless September, a month-long event which encourages every community in Renfrewshire to host a litter pick and has seen more than 35 litter picks take place so far and all are invited to take part in the final week of activities.

Councillor Cathy McEwan, Convener of Renfrewshire Council’s Infrastructure, Land and Environment Policy Board, said: “I’m delighted that so many dogs and their owners made it along to the event despite the weather not being kind.

“It shows the resilience of our dog owners in Renfrewshire who know that rain or shine their dog needs to be walked and that means picking up after them too.

“Dog fouling is something that no one likes to see in our parks or on our pavements, which is why it is so important that all dog owners recognise that they are accountable for their pets.

“Events like this show those that aren’t picking up after their dogs that they are in the minority so thank you to everyone who went along to show their support as we try to eradicate dog fouling from Renfrewshire.”

The Team Up to Clean Up campaign has benefitted from a five-year, £2.5million investment in Renfrewshire’s local environment which has seen an increased programme of road sweeping, drain clearing, litter picking and an enhanced Rapid Response Team.

For more information on the Team Up to Clean Up campaign, visit www.renfrewshire.gov.uk/teamuptocleanup.