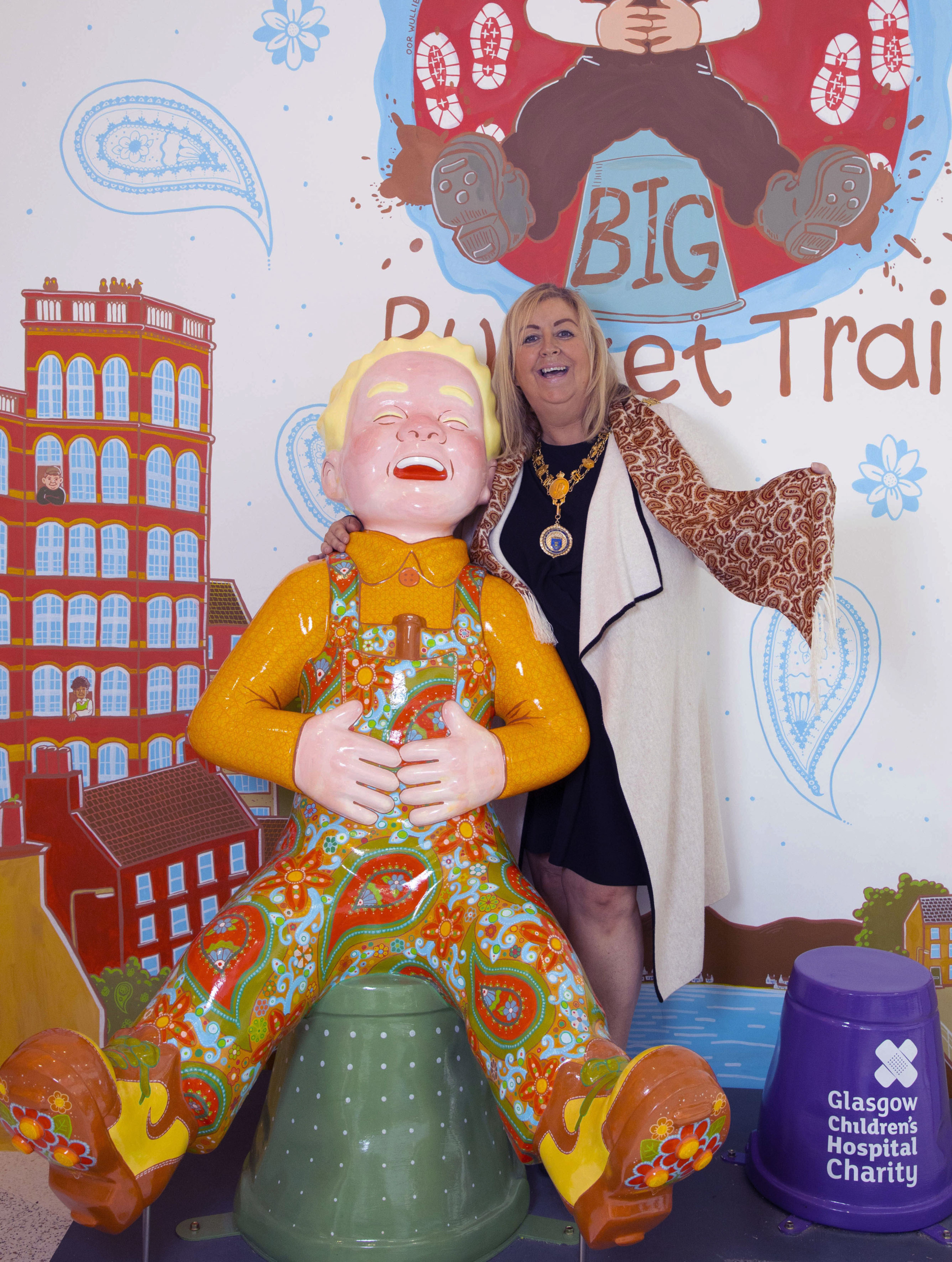 THE iconic cartoon character Oor Wullie has been given a new name.

He’s been dubbed Oor Buddie after his statue in the middle of one of Scotland’s largest shopping centres had his shirt and dungarees painted in the famous Paisley Pattern design. 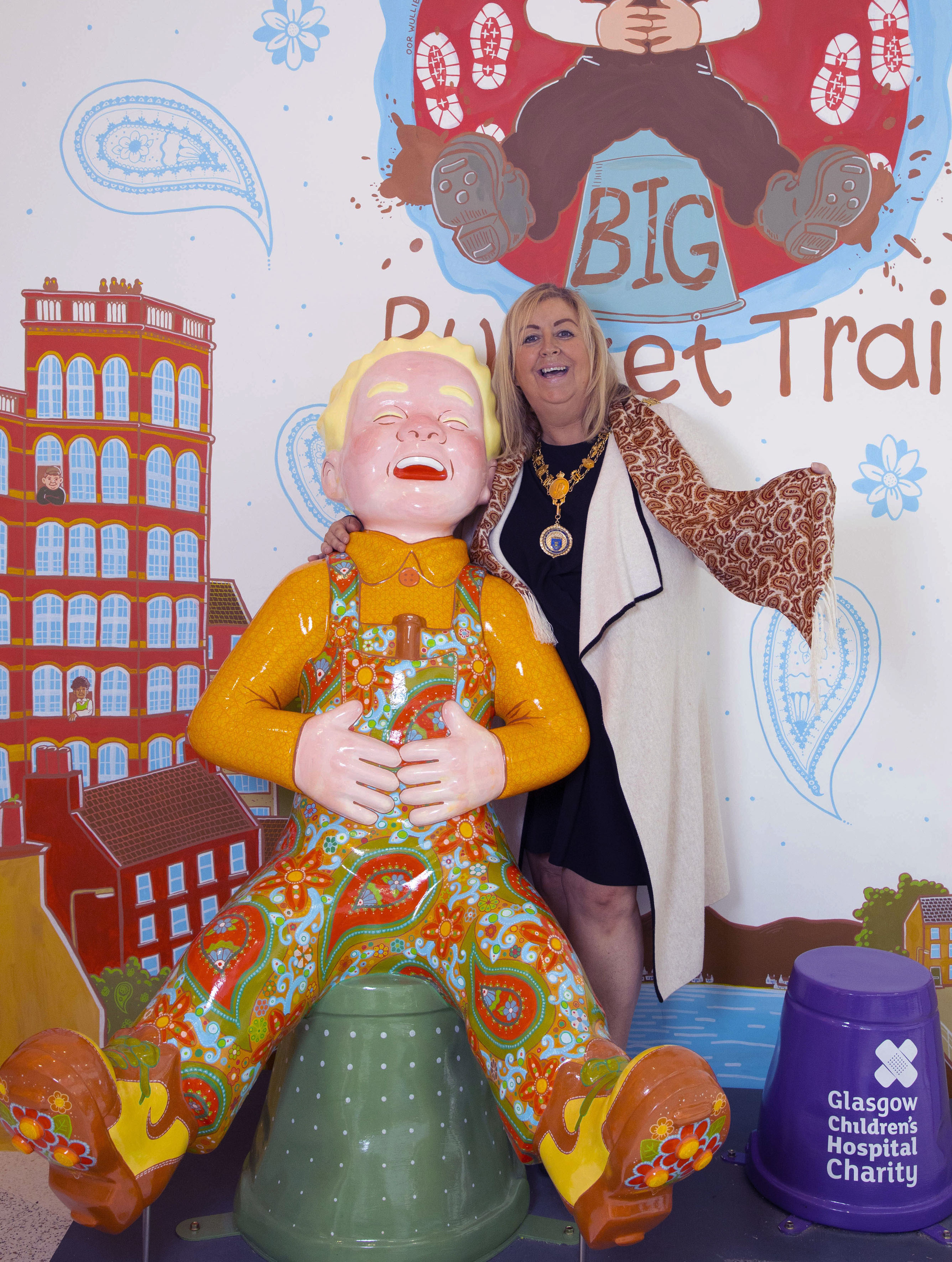 The statue is on display in the mall until the end of this month after intu Braehead became one of the sponsors of the Oor Wullie’s BIG Bucket Trail to raise money for the Glasgow Children’s Hospital Charity.

The charity has also been given space in the mall to raise awareness and collect donations towards the vital work they do. 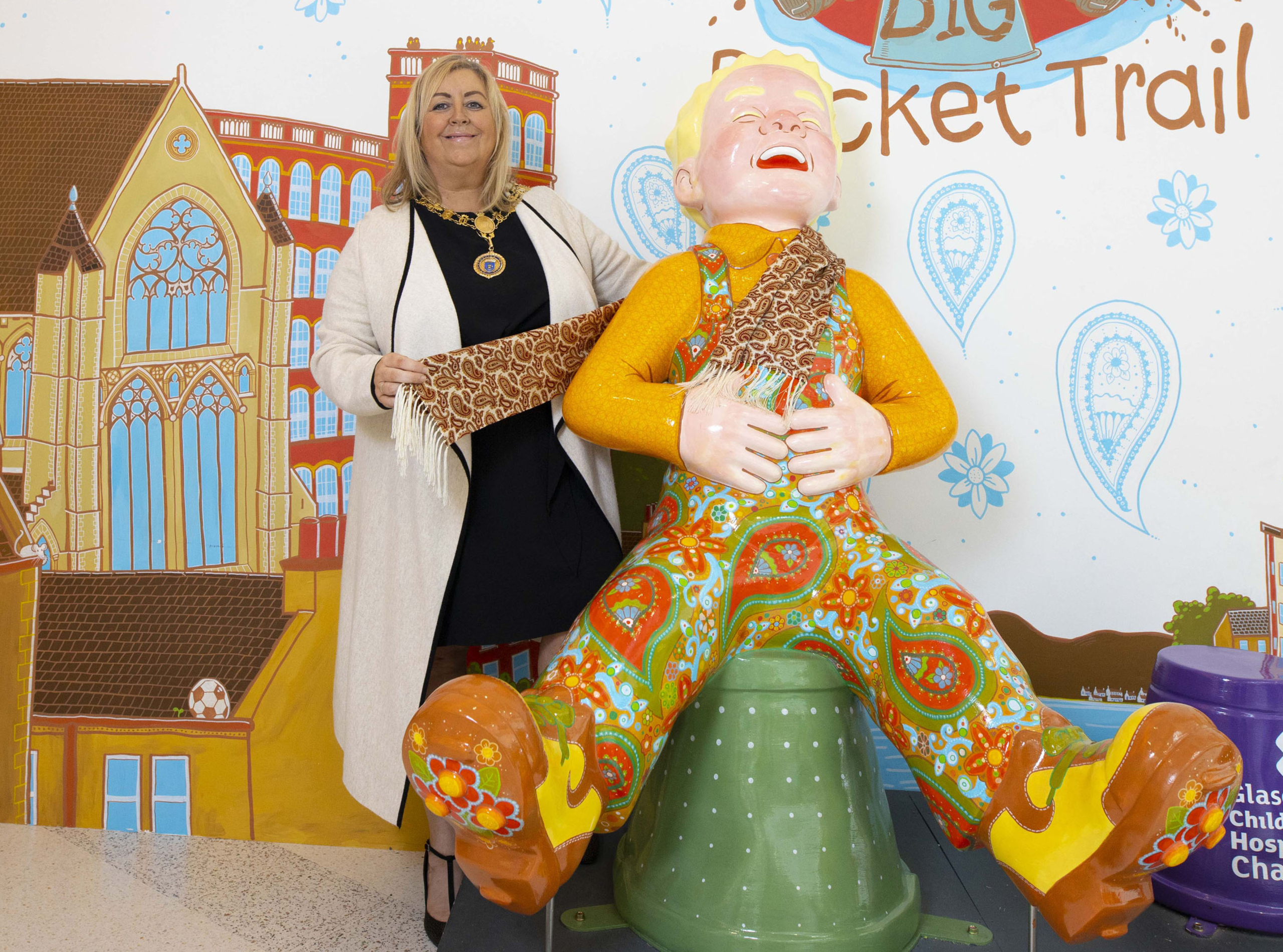 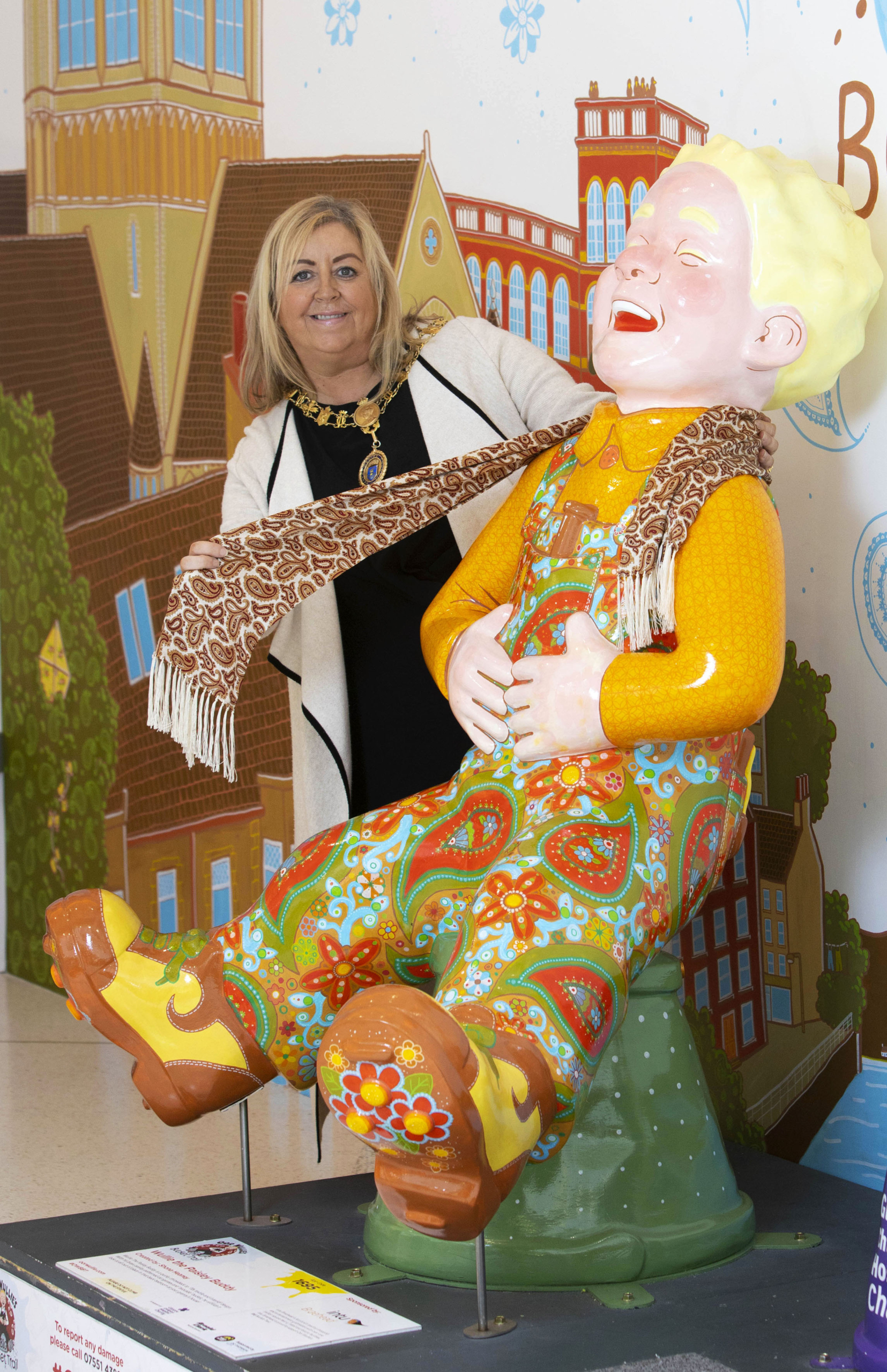 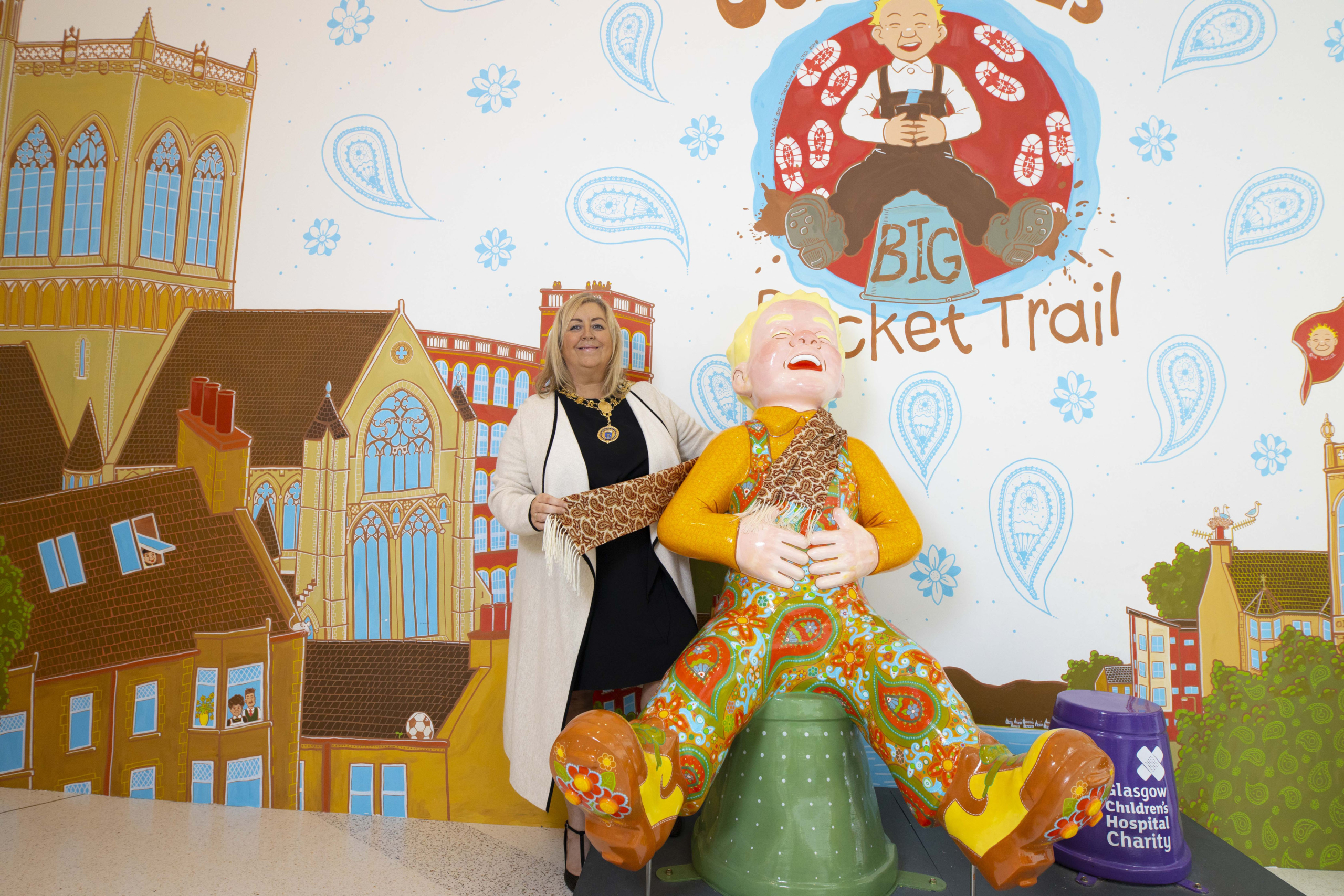 Provost Cameron said: “I’m proud to be a Buddie and it’s great to welcome such a famous character to our ranks.

“It was a great idea to have Oor Wullie dressed in Paisley Pattern clothes and to paint the wall behind the statue with iconic buildings in the town.”

As part of the sponsorship, intu Braehead also received a smaller statue that they have gifting to Riverbrae School, in Linwood for the pupils there to decorate with their own designs. This has also gone on display in the shopping centre before going back to the school.

Community development manager for intu Braehead, Lydia Brown said: “We thought we would jazz up Oor Wullie’s dungarees and shirt by giving them a Paisley Pattern design.

“And when we saw the fantastic results of the makeover it was obvious he needed a new name.

“We’ve had lots of people taking selfies and photographs of family and friends sitting on the bucket we’ve placed beside Oor Buddie, so he’s certainly been a very popular attraction in the centre.”

Kirsten Sinclair, Chief Operating Officer at Glasgow Children’s Hospital Charity, said: “Oor Wullie’s BIG Bucket Trail has been such a hit with the public this summer, and we’re incredibly grateful to intu Braehead for their support in bringing a sculpture to the centre.

“It’s thanks to the generosity of sponsors that the trail has been made possible, and we hope that lots of trail-goers manage to visit the centre before the trail closes at the end of the month.

Prints and postcards of the statue have been created by the artist, Shona Heaney, which are on sale at charity’s pop-up shop at intu Braehead.