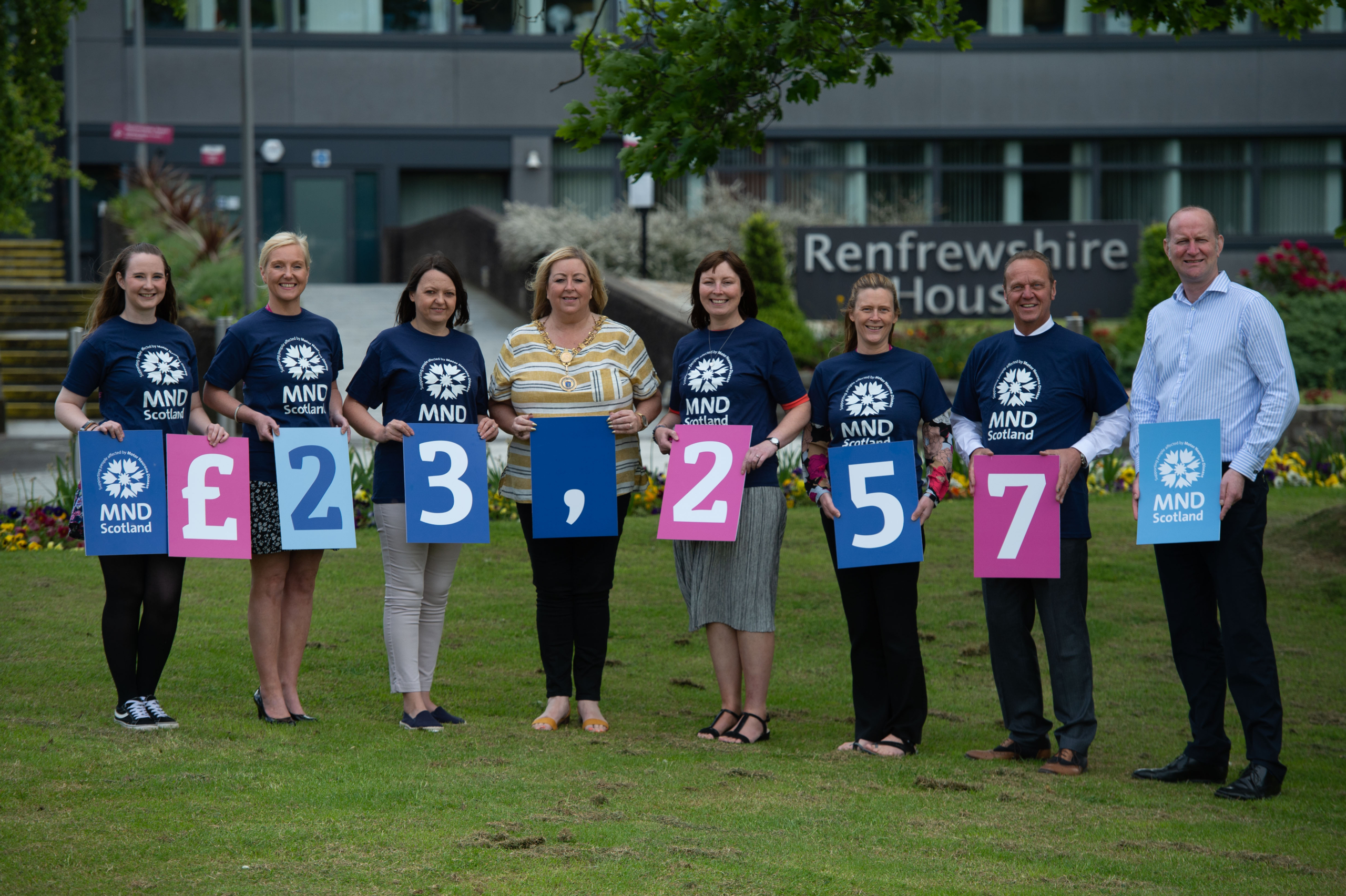 Renfrewshire’s Provost Lorraine Cameron has shown her charitable side, raising £23,257.68 for MND Scotland in 2018.

Provost Cameron pledged to support MND Scotland as one of three charities she will focus on during her time as Provost.

MND Scotland was founded as the Scottish Motor Neurone Disease Association in 1981 by John Macleod, a Strathclyde police officer and his wife Peggy. 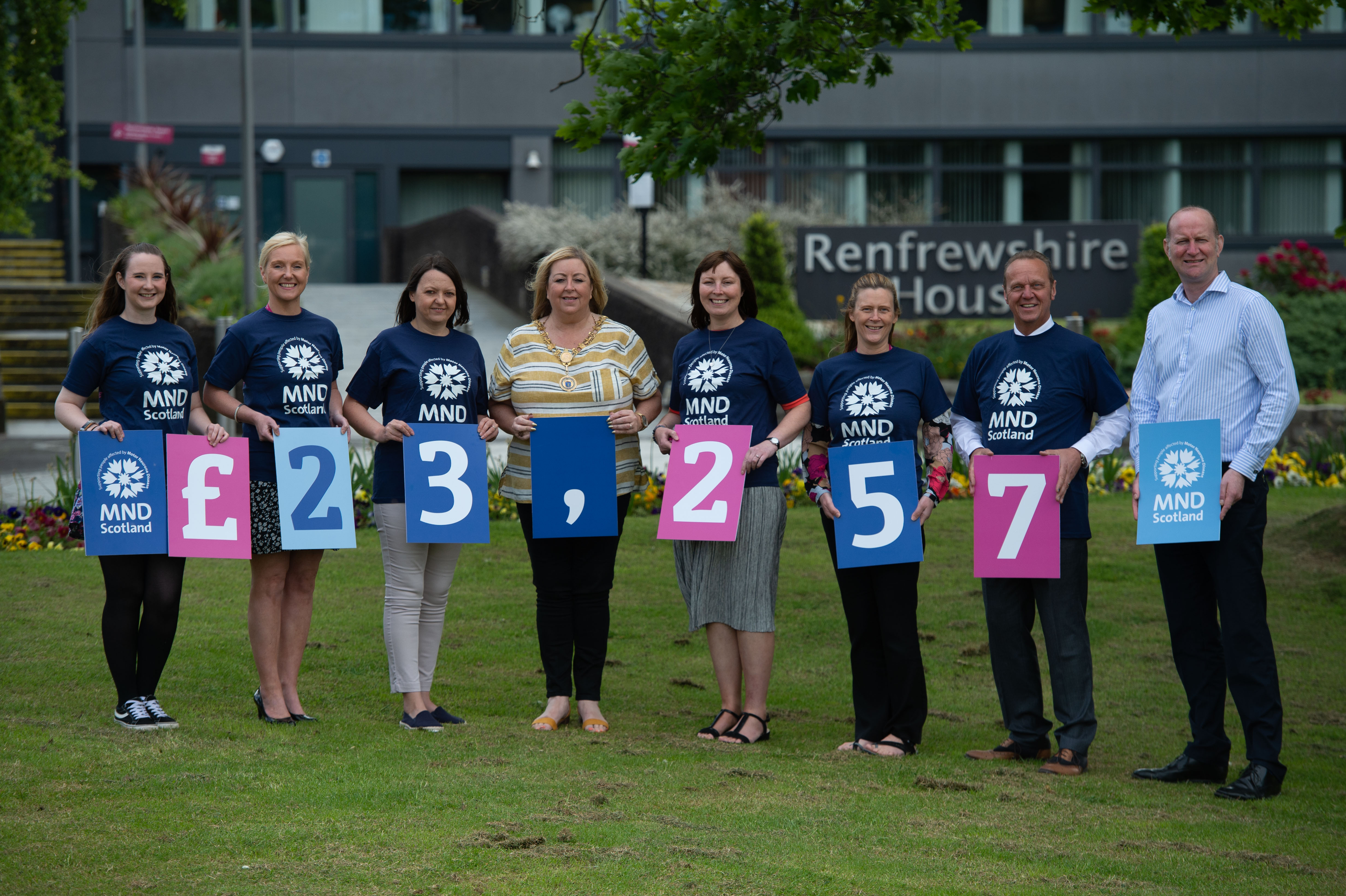 At the time, services were limited, and health professionals had little or no knowledge of the condition.

Today, MND Scotland strive to reduce the impact of MND on the lives of those affected, by offering services such as benefits advice, equipment loans, counselling, advocacy and a grants programme.

There are over 450 people in Scotland currently living with MND and on average almost 200 people are diagnosed each year.

Sadly, around 53% of those diagnosed will die within one year.

Provost Cameron said: “One of my favourite things about my role as Provost is that I’m able to support charities that undertake incredible work in our communities, and I’m proud to have been able to raise so much money for MND Scotland after losing my mum to the condition in 2011.

“One of the highlights was taking a team of daredevils to the Garry Bridge in Killiecrankie to complete the Highland Fling Swing! Everyone had a great day and I really admired everyone’s bravery. Another stand-out moment was hosting my charity ball where so many local businesses got involved and showed their dedication and commitment to raising money for charity.”

“It’s also been great to get out and about in Renfrewshire to help raise awareness and I’ve worked closely with Scotrail who also support MND Scotland. I travelled around Renfrewshire by train on MND Awareness Day with collection buckets and got to meet some fantastic people in the process.  Scotrail were also keen to help with my ‘working challenge’ and I worked a day out at Johnstone Train Station in support of the charity.

“I’ve been honoured to meet so many people across Renfrewshire who wanted to tell me their own personal connections with MND and I was touched that people chose to share their experiences and memories. I’m pleased that the money we’ve raised will help MND Scotland provide essential services and go towards research to find treatments, and eventually a cure. “

Provost Cameron also spent a day working with City Gate Construction as part of her Working Challenge where she tried different tasks from using computer-aided design technology to learning how to plaster a wall.

As well as learning new skills and raising money for charity, Provost Cameron found out more about how CGC are helping local young people gain skills and experience that will prepare them for the future.

Iain McWhirter, Head of Fundraising at MND Scotland said: “I would like to thank Provost Cameron for her incredible ongoing support. The amount raised is already making a huge difference to lives of people affected by MND in Scotland. Without supporters like this, we would not be able to continue providing essential practical, financial and emotional support to families across the country, or fund cutting-edge research projects, which are taking us a step closer to a cure.”

Provost Cameron will support local charities, St Vincent’s Hospice and Accord Hospice, in 2019 and 2020 and will return to fundraising for MND Scotland in 2021.