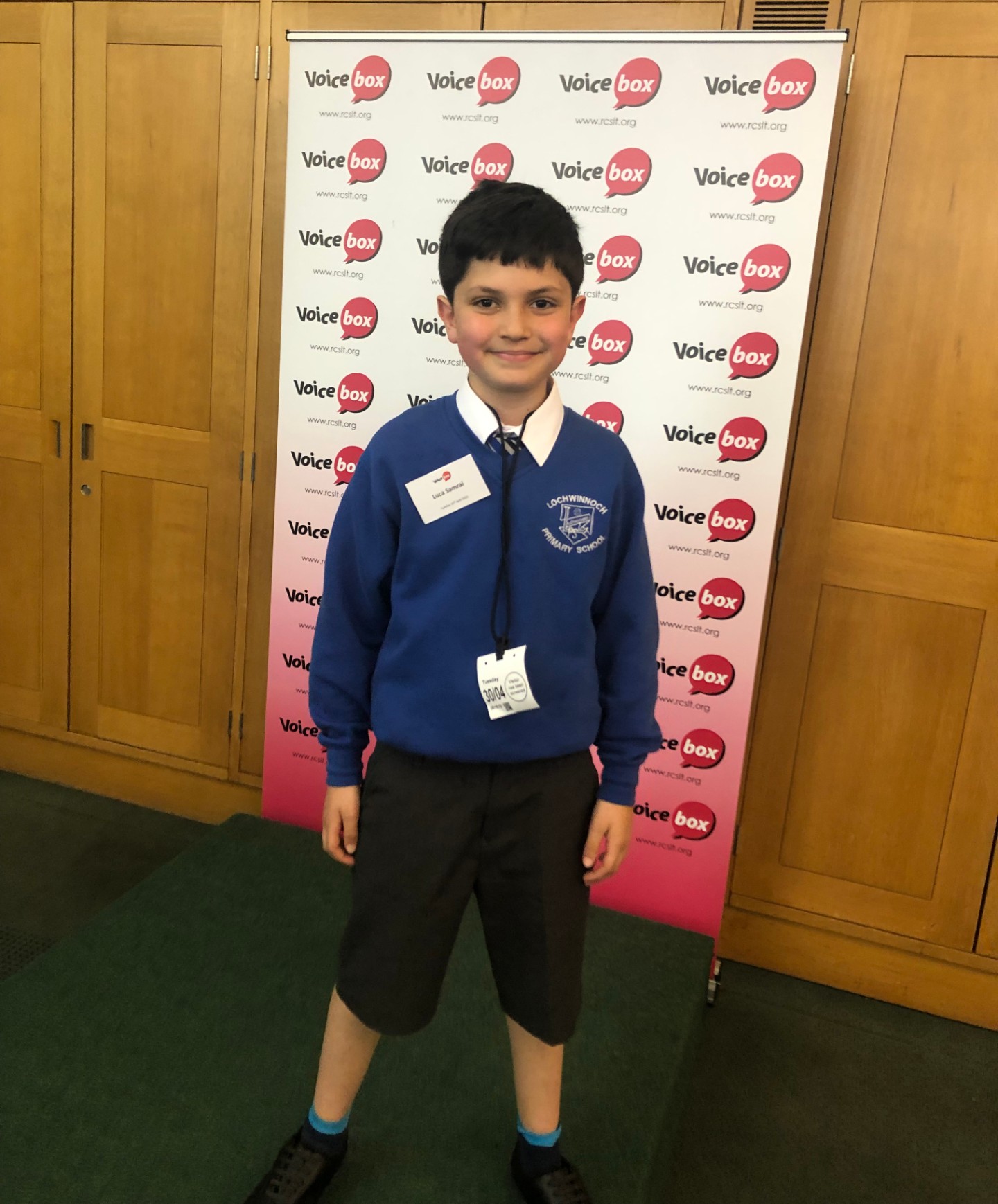 When Lochwinnoch Primary School pupil Luca Samrai had his classmates chuckling, little did he know his comic talents would see him win a trophy at a UK joke-telling competition.

Luca’s ‘one about the tractor’ joke proved such a hit it was chosen as the best joke from his school in Voice Box, an annual joke-telling competition for school children run by The Royal College of Speech and Language Therapists (RCSLT) and partnered by the National Association of Head Teachers.

Competition judges pored over more than 5000 entries from across the UK and local hero Luca’s pun was one of 18 to make the Grand Final in London.

The P5 pupil performed his punchline in front of guests at Portcullis House, Westminster and his rendition saw Luca finish as one of two runner-up places, receiving a trophy and a £50 book voucher.

“I go to cubs and that was one of the jokes that people were telling,” explains Luca, nine, from Lochwinnoch. “I just liked it as it’s quite funny. I told the joke to my class and they liked it then it won the best joke in the school so it was sent into the competition. 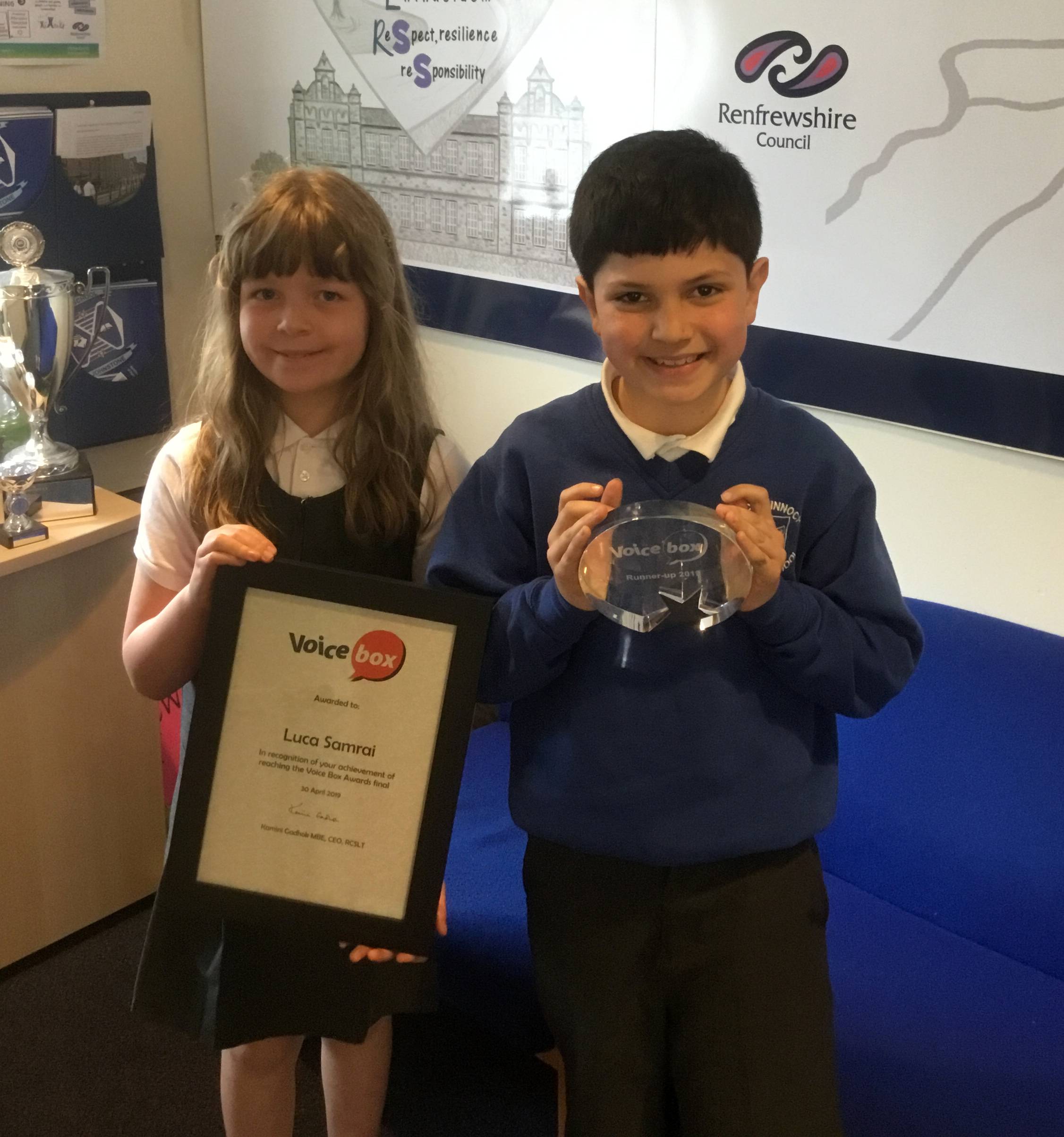 “When I got a letter to say it had made the grand final that was amazing and that I could go to London. It was very different telling the joke in front of so many people.”

When asked if this marks the start of a budding comedy career, Luca said: “I like telling jokes, but I don’t know if I’ll do it for a job. I really like watching Doctor Who so maybe I could become the Doctor.”

Voice Box encourages pupils across the UK to develop their speech, language and communication skills and aims to remind people that there are children in every classroom who need support to help them speak and understand what is being said to them.

Lochwinnoch pupils took part thanks to fellow P5 pupil Erin McAleer, nine, from Lochwinnoch, whose gran is a speech and language therapist.

Headteacher Julie Bell said: “We are always keen to make our pupils aspirations a reality, so I was delighted to support and encourage Erin when she suggested running the school competition, and we were all so excited when Luca won. I’m sure the trip to London was an experience neither pupil will forget and we couldn’t be prouder of Erin and Luca for showing such enthusiasm and determination.”

Kamini Gadhok MBE, Chief Executive of the Royal College of Speech and Language Therapists, said: “In every classroom there will be between two and three children with communication difficulties. The Voice Box competition helps teachers, children and parents to focus on the impact effective communication can have on a child’s social and emotional well-being.”

There was once a kid called Jeff who loved tractors. He had tractor pyjamas, tractor wallpaper and tractor clothes. So for his birthday, he asked for a tractor, but did he get one? No!

But what he did get was a ticket to a tractor convention. Jeff was so excited and when he went to the convention he saw a big cool tractor, all pink with big green wheels. He jumped in and went vroom, vroom, vroom!

Then a security guard came along and told him he was not allowed on the tractor. But Jeff didn’t like to listen, so he jumped straight back in and went vroom, vroom, vroom again. But then the guard came back and said: “That’s it, I’ll be watching you from the security camera.”

But Jeff still didn’t listen and taped up the camera and jumped back in the tractor and went vroom, vroom, vroom again! This time when the guard came back from his break and saw Jeff in the tractor he said: “That’s it, you’re banned!”

Jeff was so upset, he leapt up and screamed: “That’s it, I’m done with tractors forever!” Jeff was so upset he had to go to his favourite café to buy himself a glass of milk to cheer himself up.

Then, smoke began to fill the café. There must have been a fire in the kitchen. Jeff took the biggest, deepest breath you can imagine and sucked in all the smoke and blew it all out into the car park. When he sat back down at his table, the waiter rushed over and said: “How did you do that? That was amazing!”