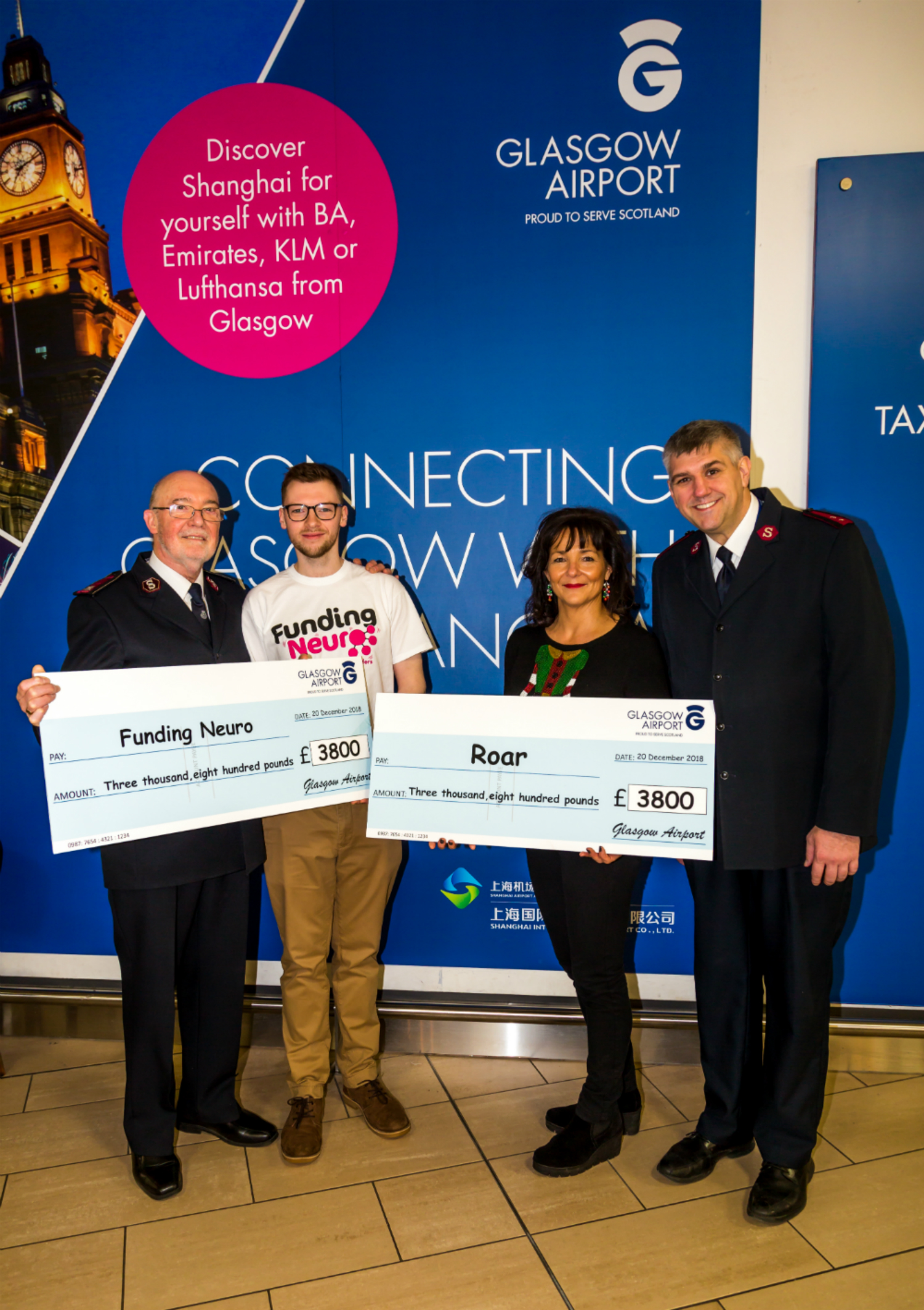 Glasgow Airport’s Chaplain’s Charity raised more than £7,600 to support two charities based in Glasgow and Renfrewshire in 2018.

Chaplain Keith Banks and his team were supported by staff from across the Glasgow Airport campus in raising funds for Glasgow-based Funding Neuro and the Reaching Older Adults in Renfrewshire (ROAR) throughout last year.

Keith Banks, who has been the airport’s chaplain since 2009, said: “We had asked our staff to nominate organisations for the Chaplin’s Charity programme in 2018 and received so many worthwhile suggestions.

“We really struggled to choose just one, so we decided to pick two – one from Glasgow and another from Renfrewshire, given the airport’s close links with both areas.

“It was the first time we’d split the annual charity partnership, but Funding Neuro and ROAR are two fantastic charities which provide different, yet incredibly worthwhile support in the local community.”

Introduced by Keith in 2010, the Chaplain’s Charity has raised almost £60,000 in total for a number of organisations including The Teddy Bear Foundation, CHAS, Robin House Children’s Hospice, Teenage Cancer Trust, The Salvation Army, Wish upon a Star and Make a Wish and the British Heart Foundation.

He added: “As always I’m very grateful to my colleagues across the airport – and of course our incredibly generous passengers – who help raise these vital funds each year.”

Sharon Kane, Funding Neuro’s chief executive, said: “It has been a privilege to be one of the Chaplain’s charities. Keith and the staff at Glasgow Airport have put in a lot of effort and organised some fabulous events to raise such a fantastic amount.

“The funds raised will help us to continue our work to find the answers to some of the most devastating neurological conditions.”

The aim of ROAR is to tackle loneliness in older age by helping people get out and stay connected with their communities and peers. They operate 25 clubs, projects and services across Renfrewshire including lunch clubs, cinema and exercise classes, reaching almost 1000 older people every week.

Nicola Hanssen, ROAR’s general manager, said: “We are so grateful to have been selected for the Chaplain’s Charity in 2018. It has been a terrific year. We have gained far more than the money.

“It has been a real privilege to get involved with the staff at Glasgow Airport who have been so generous with their time, effort and support. The funds have gone towards keeping our art club operating, which is a lifeline to the members who come from all walks of life and really rely on the companionship there to keep them going.”

To find out more about the work of both charities visit: www.fundningneuro.com, or www.roarforlife.org

Glasgow Airport Chaplain’s Charity 2019 will be unveiled later this month. For more information on the airport’s chaplaincy service contact chaplaincy@glasgowairport.com

LOCAL MP IN BREXIT SPEECH: SCOTLAND MUST BECOME AN INDEPENDENT NATION TO AVOID...
Scroll to top