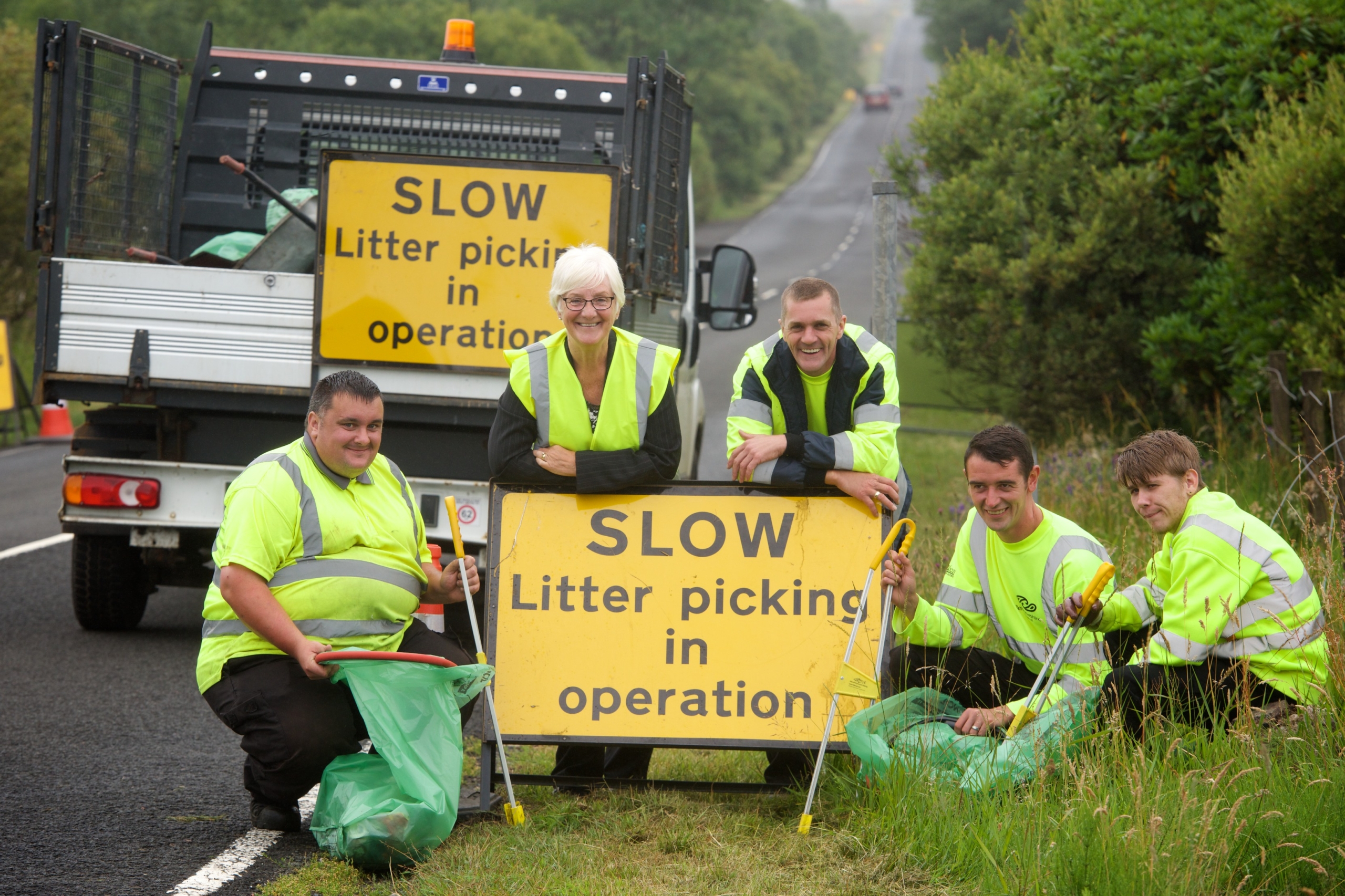 Roadside litter is set to be tackled as the latest element of Renfrewshire’s growing Team Up to Clean Up campaign. 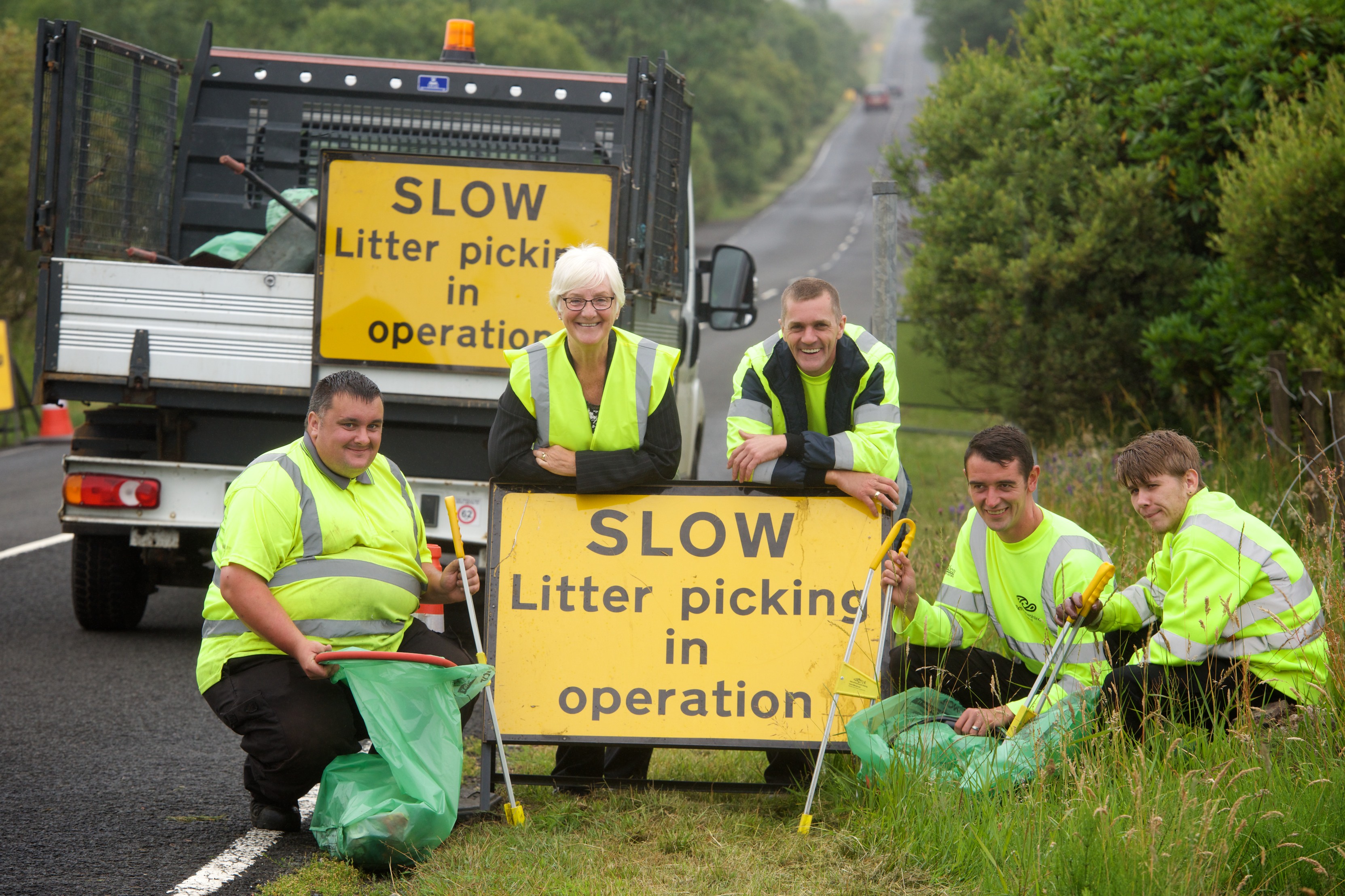 The latest strand of the campaign aims to deter drivers from throwing litter out their windows onto the roadside and pedestrians from failing to use litter bins.

A dedicated Rapid Response Team (RRT) has been set up to tackle the problem and will work to clear verges and pavements across the area of discarded litter. 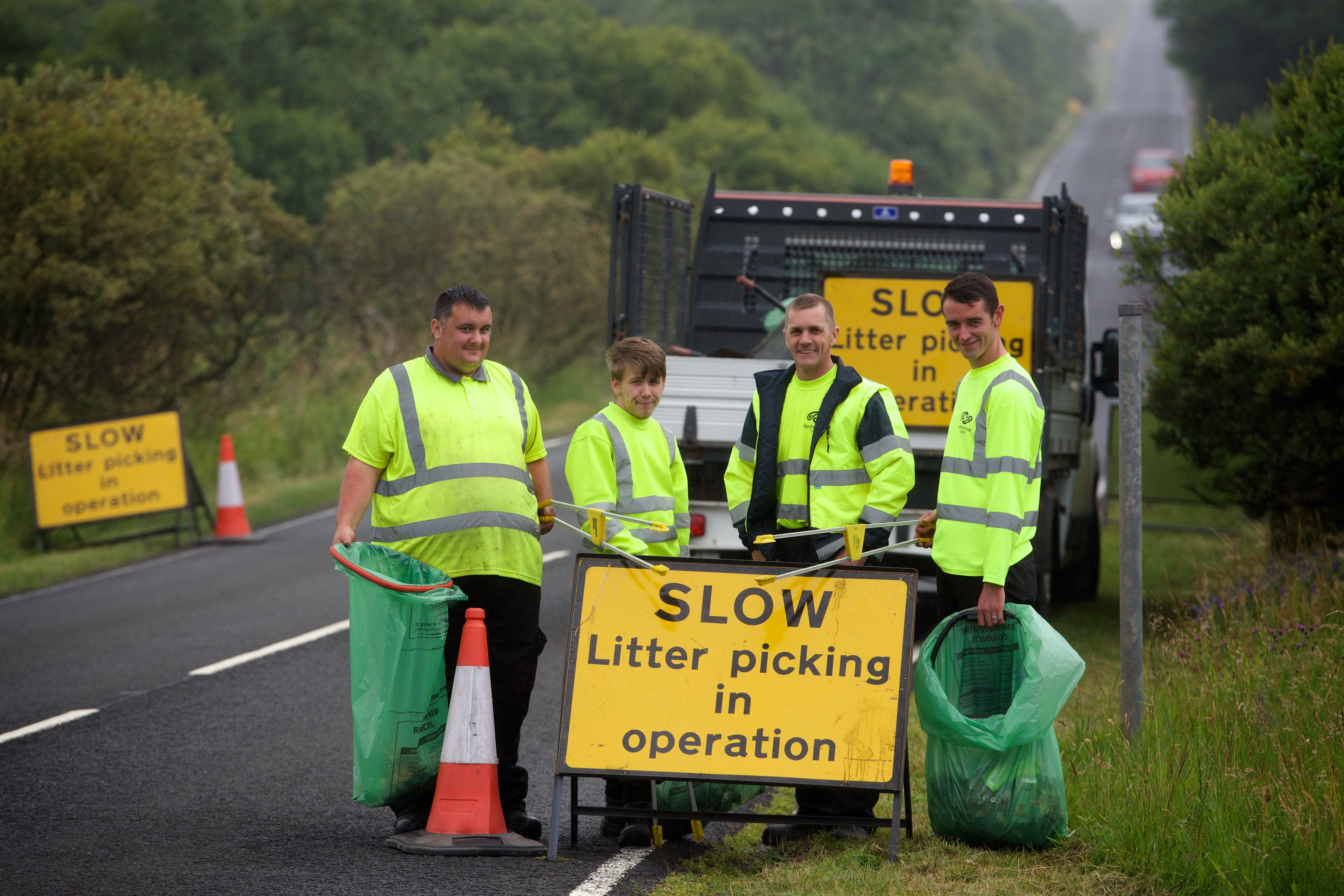 Residents will be able to report areas of concern and issues will be assigned to the new RRT as part of their ongoing programme of work. 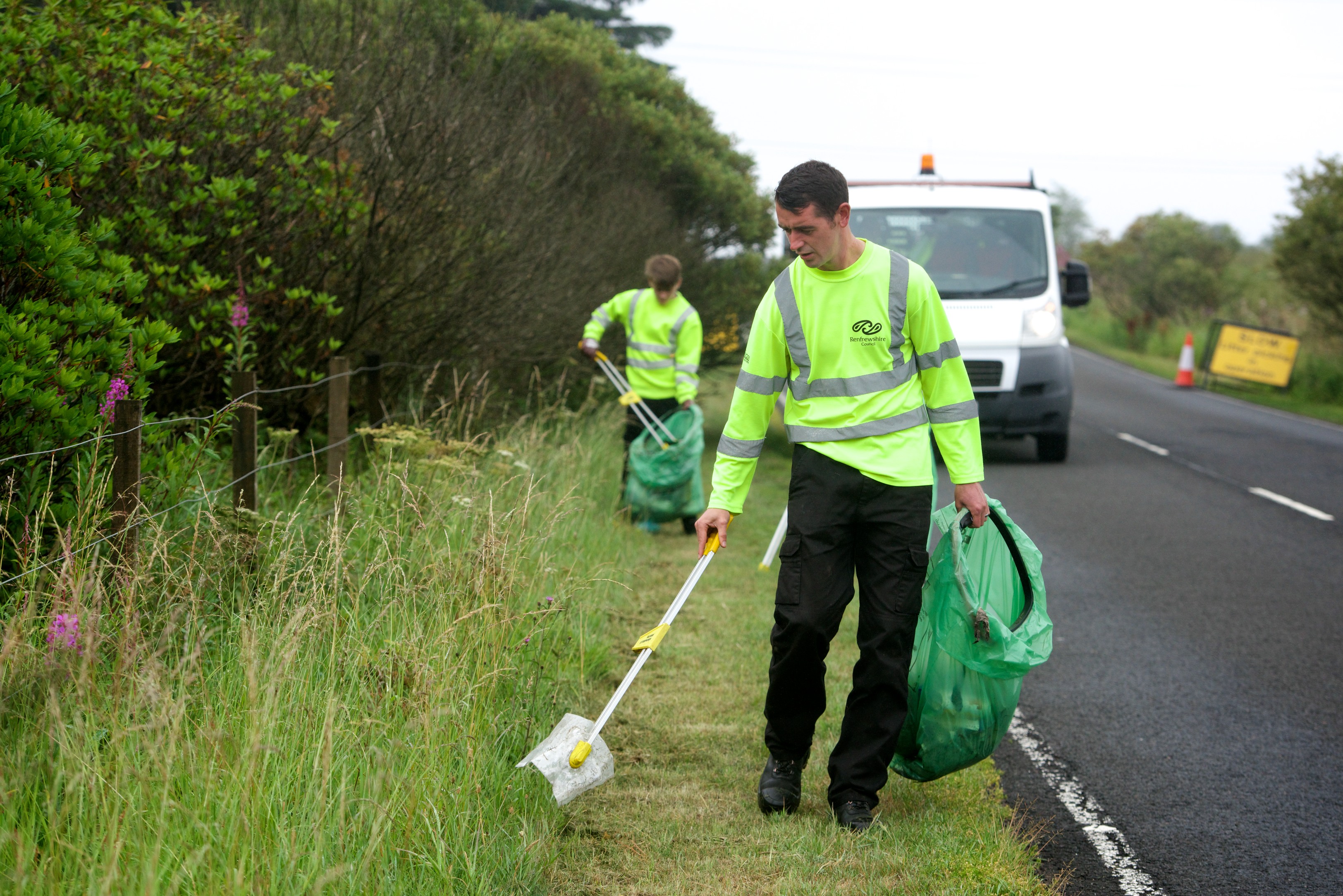 The new team will work in tandem with the current RRT who were expanded at the beginning of the campaign and carry out daily patrols across Renfrewshire, tackle issues of flytipping and work with local businesses to ensure they are disposing of their waste correctly.

Grant Roderickson, Roadside Litter RRT, said: “Unfortunately people tend to throw all sorts out of their car windows and we have to go out to clean up after them. 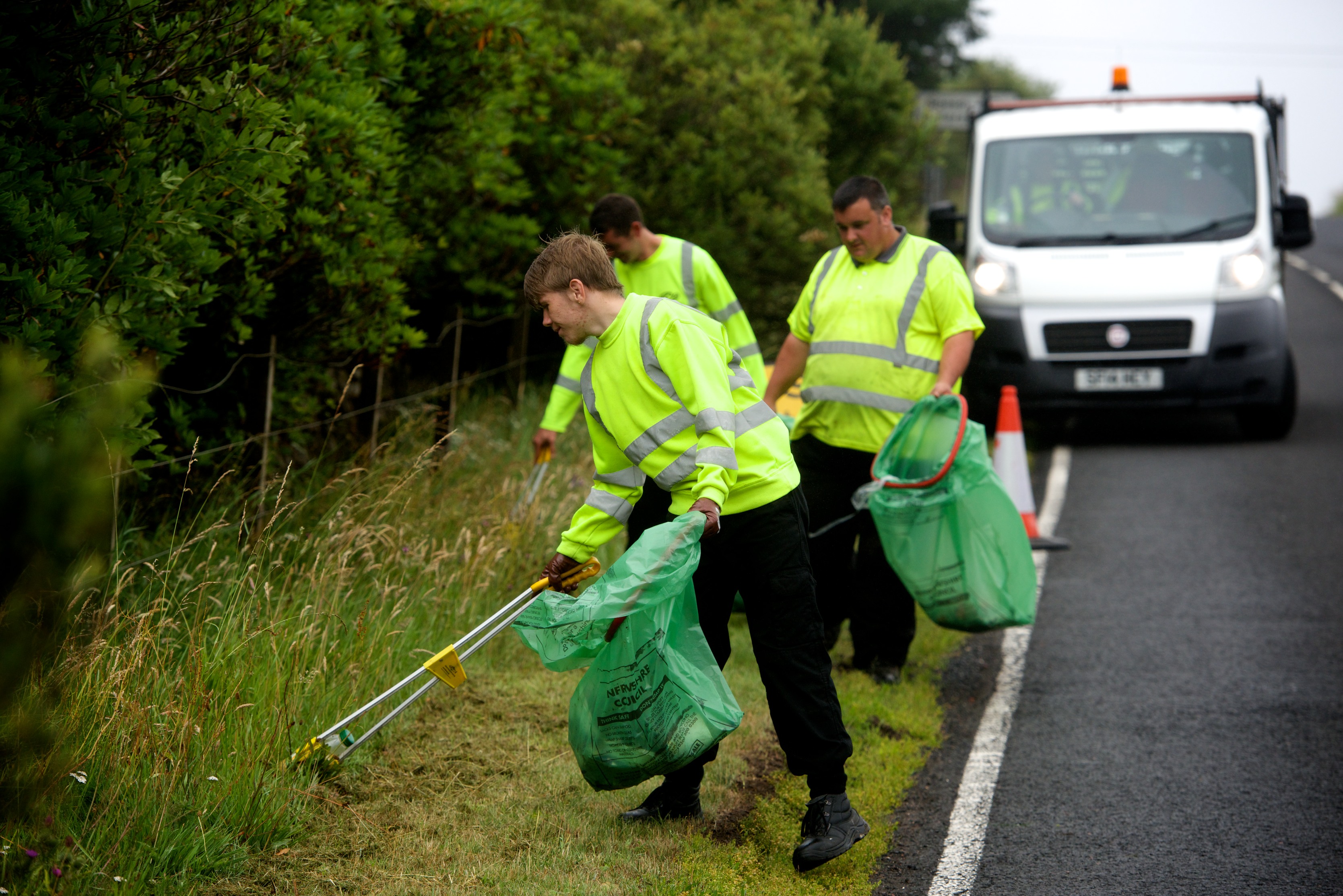 “We put out signs to warn motorists we are there but often drivers don’t slow down enough which can be one of the main dangers of this role.

“We’re working hard to pick up all the litter that is thrown out of cars, tackle flytipping on rural roads and really trying our best to keep Renfrewshire clean.”

Renfrewshire Council recently supported national environment charity Keep Scotland Beautiful’s Week of Action on roadside litter which asked motorists to ‘give their litter a lift’ and consider the local environment.

Councillor Cathy McEwan, Convener of Infrastructure, Land and Environment Policy Board, said: “Roadside litter has been a key issue I have wanted to tackle as part of the campaign as it is damaging to the environment and a blight on the beautiful scenery we have in Renfrewshire.

“Drivers need to recognise the damage they are causing and that what might just be one piece of litter to them is actually causing a much bigger problem.

“Working at the side of a busy road can be dangerous and our new team have to undergo training to ensure their safety as they clear the roadsides of litter.

“Please take the time to think before you throw litter away incorrectly and instead keep it with you until you get home or until you make it to the nearest bin.

“Small changes can make a big difference and that is at the heart of our Team Up to Clean Up campaign.”

£2.5million has been allocated to Renfrewshire’s Team Up to Clean Up campaign over the next five years to allow the continuation of an enhanced programme of gully cleaning, increased mechanical road sweeping, the replacement or removal of out of date street signage and an additional six community litter pickers.

The campaign also challenges the community to play their part and this has proved extremely successful with more than 120 community clean ups taking place throughout the area and more than 2100 volunteers taking part.

A number of high-profile businesses, including ThermoFisher, McDonalds and Diageo, have also engaged with the campaign and have undertaken litter picks of the local area with their staff.

For more information on the campaign and how you can get involved visit www.renfrewshire.gov.uk/teamuptocleanup or join the dedicated group at www.facebook.com/groups/teamuptocleanup.

Glasgow News? Daily Updates part of our network
Paisley Puffins get off to a flying start New Renfrewshire walking group for...