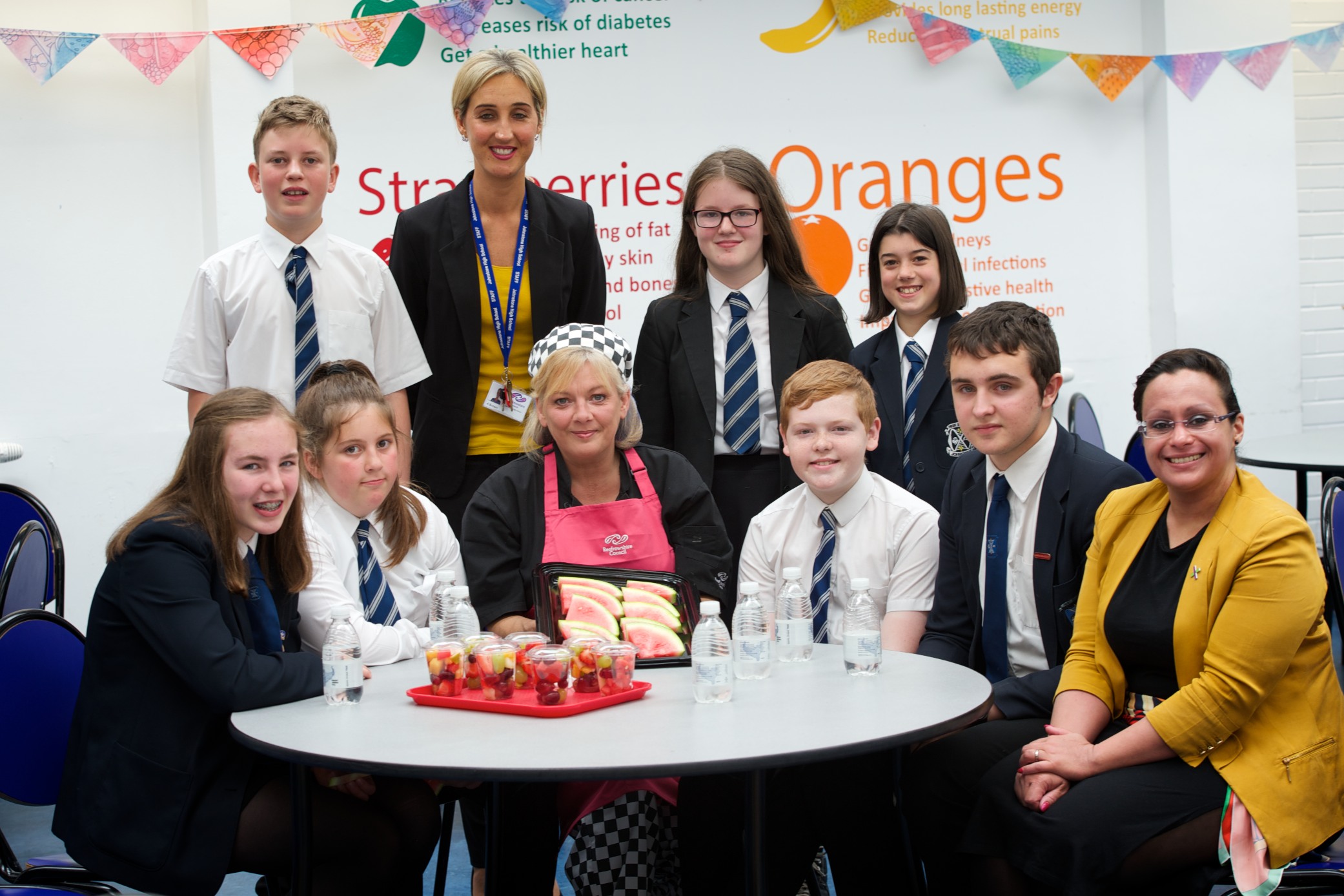 Young people across Renfrewshire are having their say on school menus as part of an initiative to improve their mental and physical wellbeing.

Financed by Renfrewshire Council’s Tackling Poverty fund and operated in partnership with Active Communities, each school has a teacher coordinator who works with a group of pupils who promote issues students identify as important to them, such as healthy eating and make improvements for their fellow students. 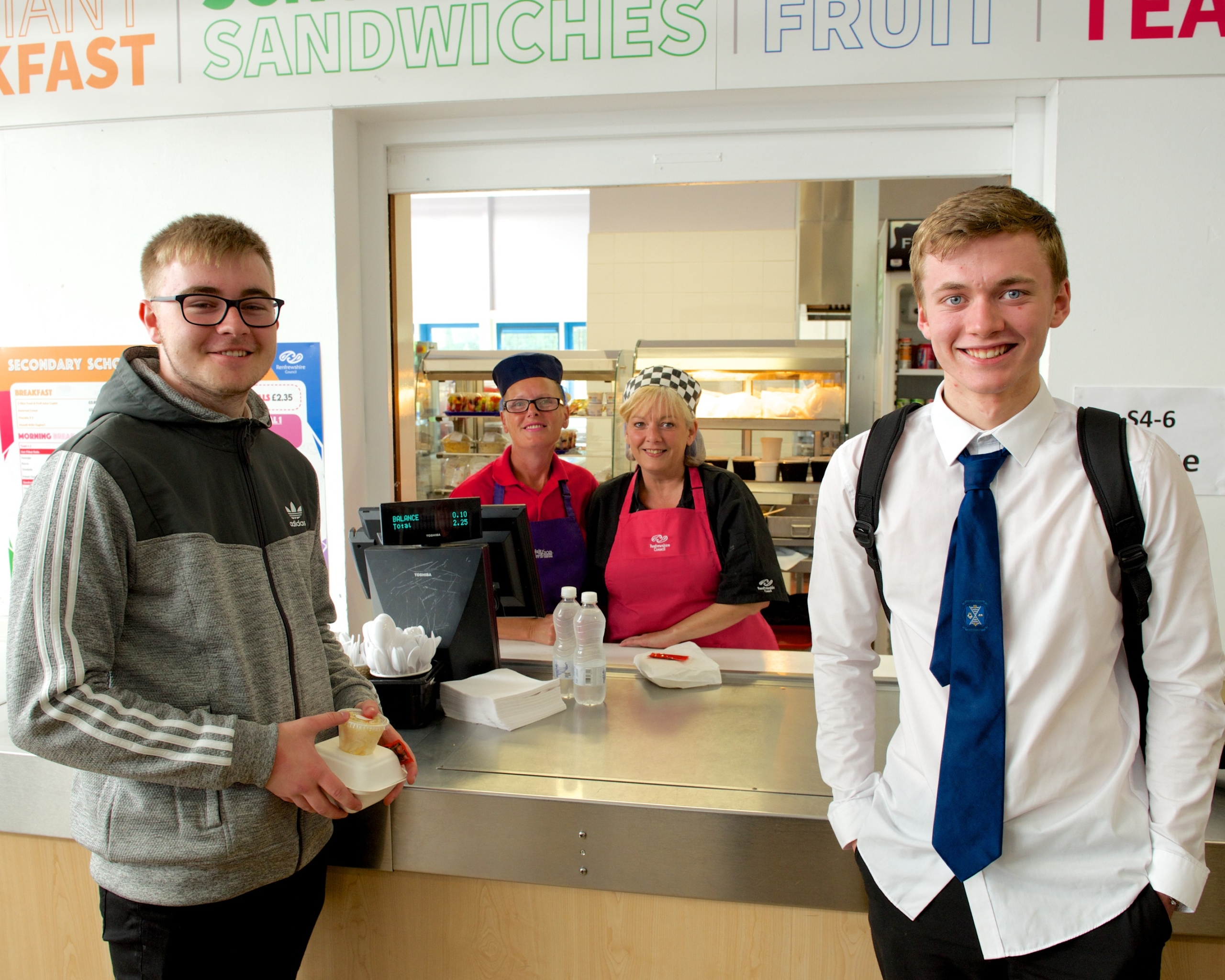 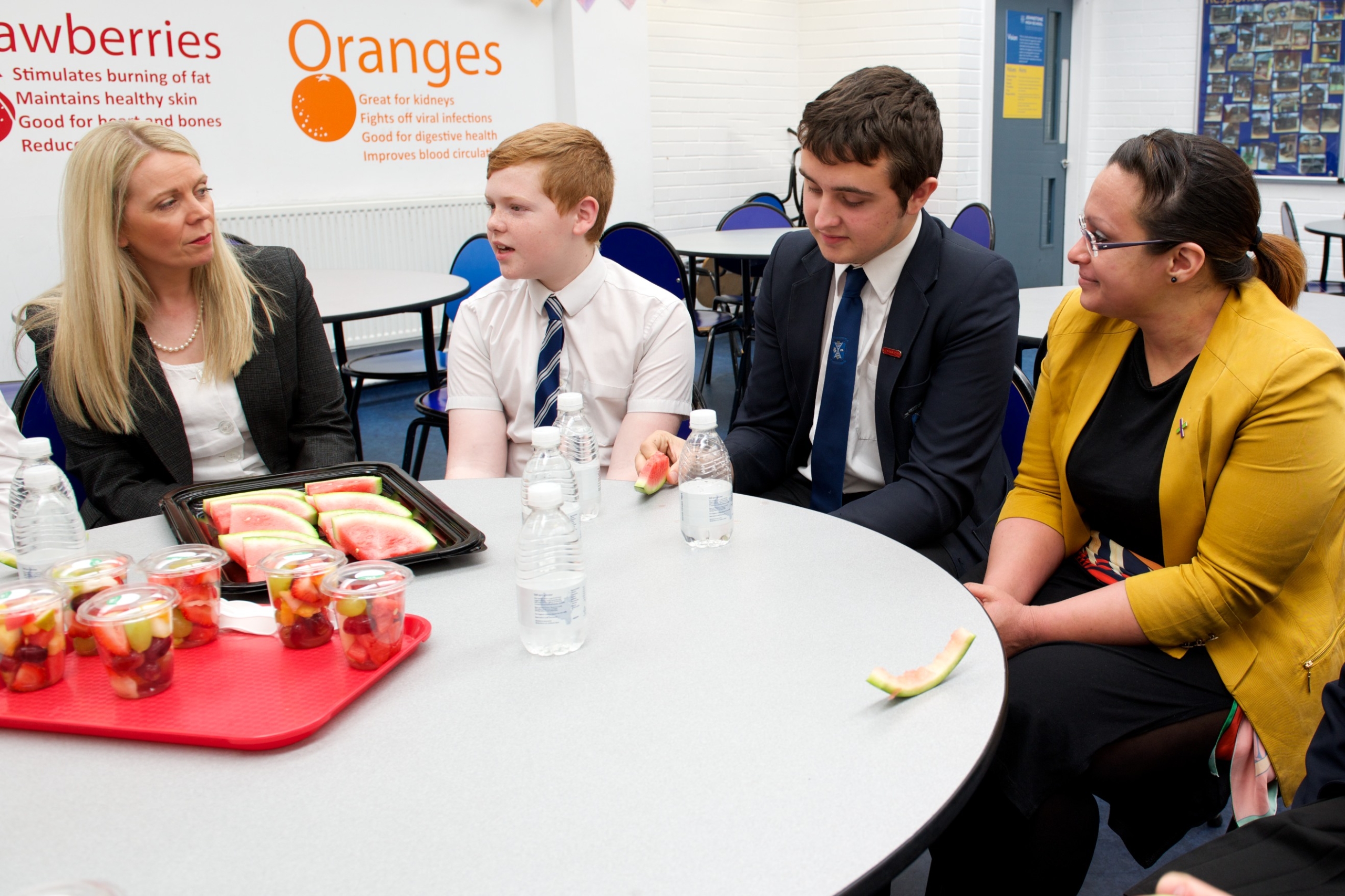 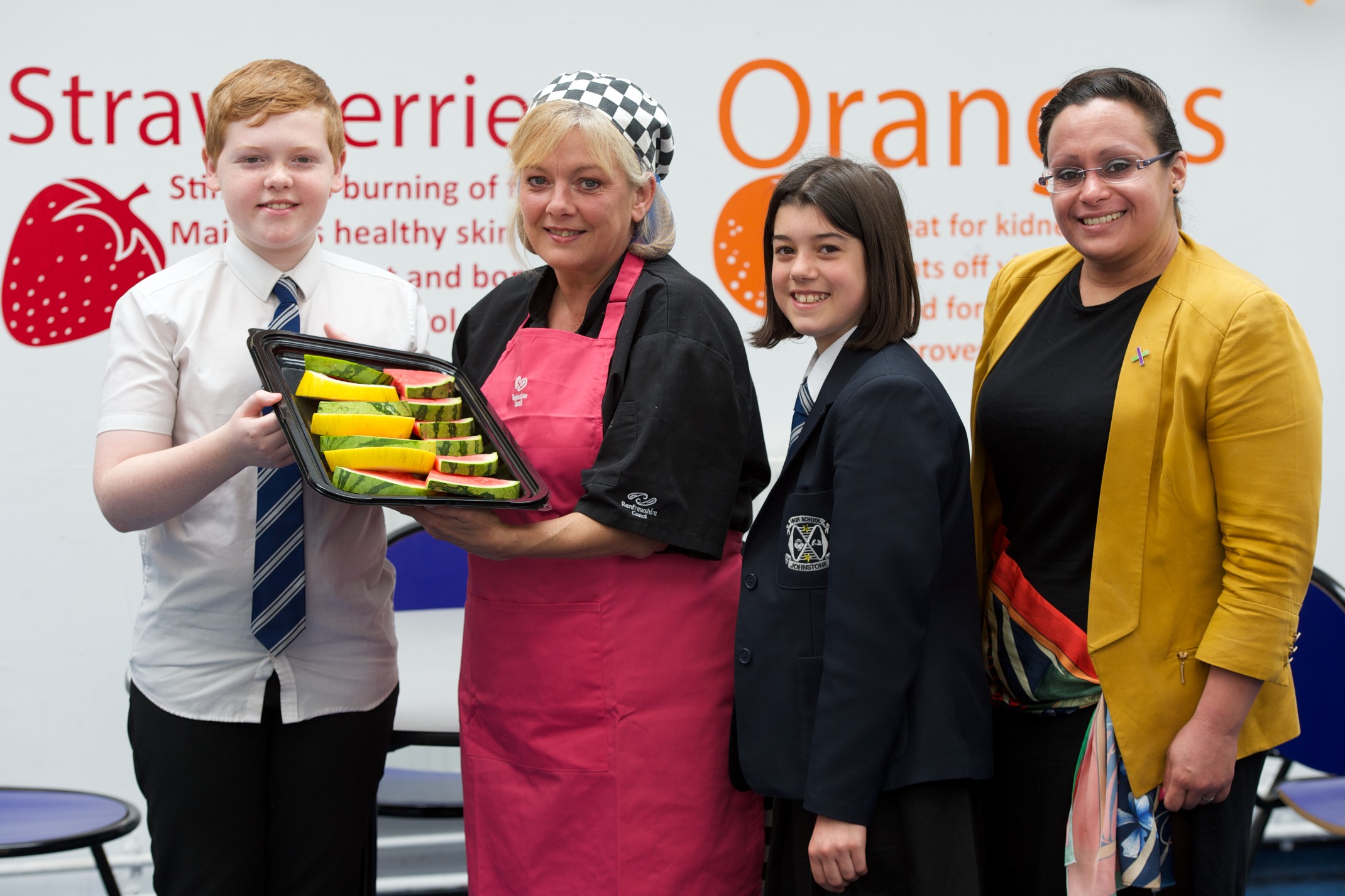 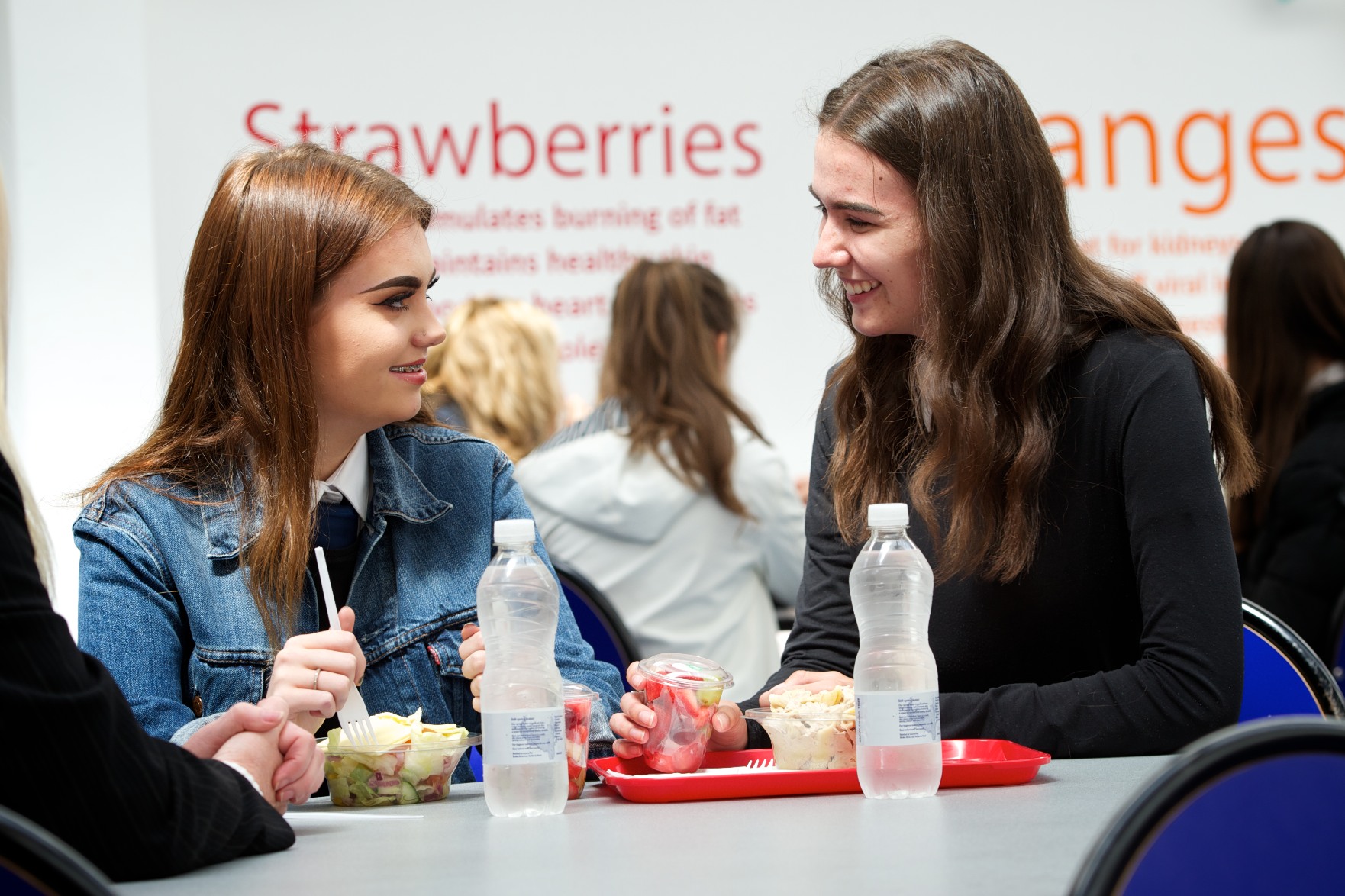 School catering staff have met regularly with some of the groups and as new school menus were introduced just weeks ago across Johnstone, Gryffe, Castlehead, Trinity, Park Mains, Paisley Grammar and Renfrew High Schools and pupils and staff are already enjoying the positive benefits.

Renfrewshire’s Year of Young People Champion, Councillor Michelle Campbell dropped into Johnstone High to see what a difference the initiative has made.

She said: “The message from the young people here has very much been how much they value having their voices heard and having an input into something as fundamental as the food on their plates.

“It’s not just that there’s a wider choice of menu options, but that young people are encouraged to sit down and eat with their friends in a social setting.

“They see lunch as a social situation, which is such a positive thing in terms of their health and wellbeing.

“Sharing a meal is something which unites us all and this is something that will develop going forward, for young people’s entire school careers.”

A healthier breakfast service has been introduced to phase out traditional filled rolls in favour of choices such as toast, poached eggs and fruit, as well as reducing the size and availability of home baking options.

Young people have been invited to taster sessions, including primary seven pupils ahead of starting S1 after the summer

Second year pupil Thea Brady said: “I think the new menu is good as there are a lot of choices, especially for people who perhaps have food allergies to think about.”

Aidan Hepburn, 16, who is a fourth year pupil at the school, said: “Ever since it started I’ve really liked it as there’s a much better choice and it’s much healthier.

“There are also choices if you are vegan. I’ve been enjoying coming to the canteen.”

Head teacher Lynne Hollywood says that in the weeks since the new menu was introduced there have been positive changes across the school.

She said: “This for us is about so much more than the food that’s going into the children, it’s more about a lifestyle change.

“When we had our school health week, our home economics staff worked with catering staff to showcase the new menu to the pupils and to encourage staff to come down and eat alongside them.

“The buzz in here having everyone eating together from proper plates with cutlery was great. You can’t underestimate the impact of the social side of sharing a meal together, of talking and interacting.

“The pupils have had a huge impact on the menu. We’ve had tasting sessions where only the pupils were there as we found if the catering staff were offering different foods the pupils might be reluctant to try it, but if they were being offered it by the fifth and sixth year pupils they were much keener.

“Going forward, the pupils will very much continue to be involved and to have a voice.”

Pupils have also been able to undergo valuable work experience in the school kitchen alongside catering staff.

Lynne Hollywood added: “The benefits to the young people and the staff are enormous, it lets them feel they are connected to the school and makes everyone feel they are much more part of a team.

“The challenge has been to encourage our young people to stay in the school grounds at lunchtime and enjoy the environment here.”

The school’s Hearty Lives coordinator Ainsley Brown said: “The group of pupils worked with our catering manager to redo the school menus as along with young people across Renfrewshire, they were keen to see more healthy choices.

“The kids were able to give their feedback after taster sessions and it’s great to see the pupils eating more sociably.”

The good work going on at Johnstone High and other schools highlights how the food on our plate is about so much more than being mere fuel.

They have worked with 5,000 pupils on a range of issues, including diet and nutrition and aims to help them lead their own activities to improve their health and wellbeing.

Youth mental health is a key priority and sharing a meal with family, friends or our peer group is a positive thing- whether it’s bonding through shared experiences, relaxing, or just having someone to talk to.

It’s clear to see that by encouraging our young people to eat better in school canteens where they find the choices attractive, then they’ll choose to spend time there with their friends in a safe and nurturing environment.

If young people are introduced this in their formative years of Secondary School then it’s something they can take with them through school and beyond.

It’s great to see young people’s voices shaping the way we deliver our services and we hope it encourages young people to have the confidence to get involved.

Valuable work experience in the kitchens allows pupils and staff to feel part of the school community.

As well as improving their health, sitting down to eat with their fellow pupils is also great for developing social and communication skills, which in turn will help their learning.

In the Year of Young People, it’s especially relevant to support projects such as this and we have committed £5 million over the next five years to the Tackling Poverty fund to continue key projects such as Hearty Lives which we know are making a real impact for young people and their families.

New funds to the fore at Kilbarchan visit
Scroll to top