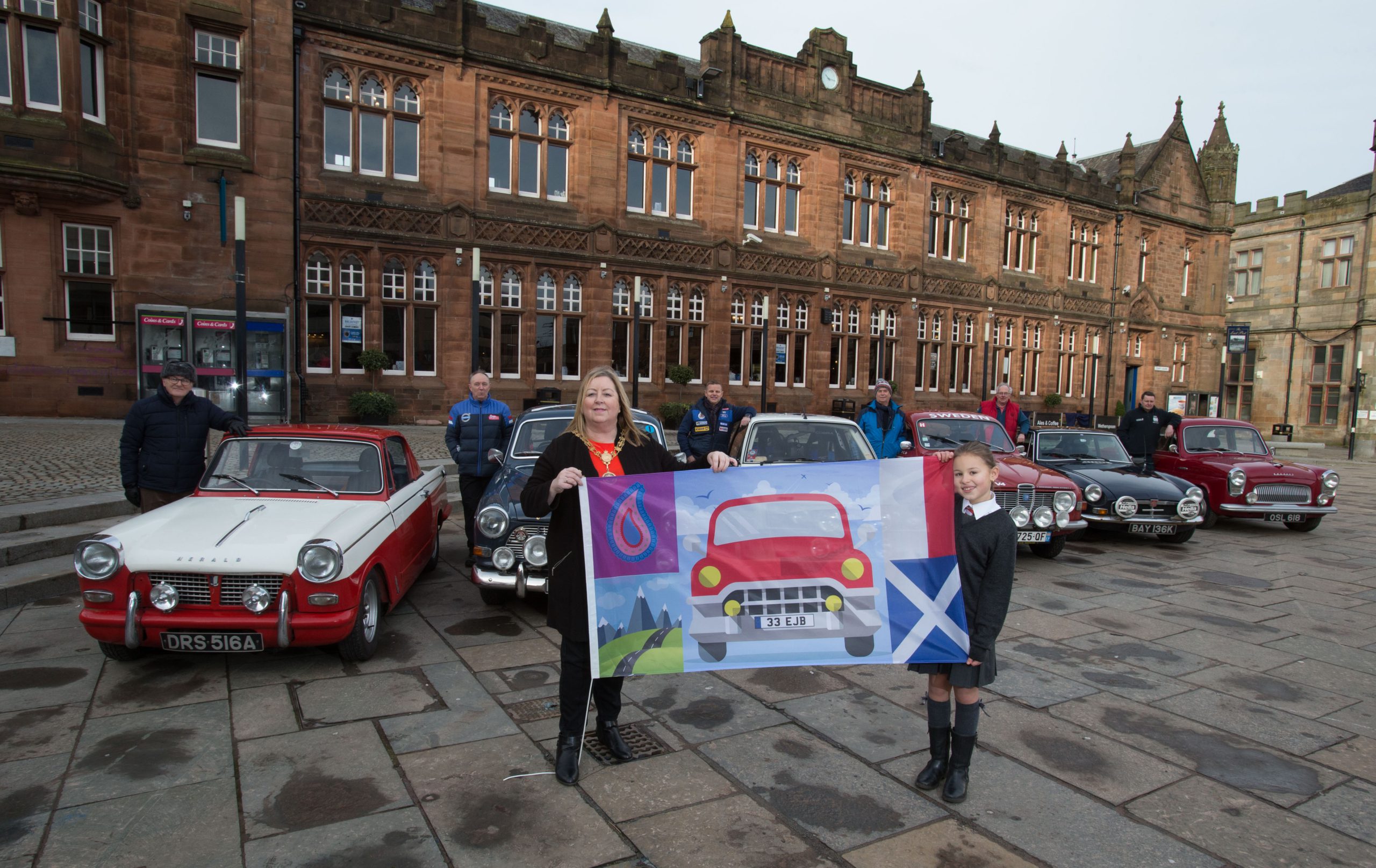 The centre of Paisley will be lively tomorrow night as the town waves off the cars and crews in this year’s start of the 2018 historic rally run to Monte Carlo.

But for 10 year old Primary 6 pupil Emilia Kozlowska, of St John Ogilvie Primary School in Paisley, it’ll be a really special occasion. She won a Renfrewshire-wide competition for a pupil to design the flag to be used to wave off the drivers and her winning flag will be the centrepiece of the start outside Paisley Abbey at 6pm.

It’s the fifth time the town – the sole shortlisted Scottish entry for the title UK City of Culture 2021 – will be the only British start point of six European cities. 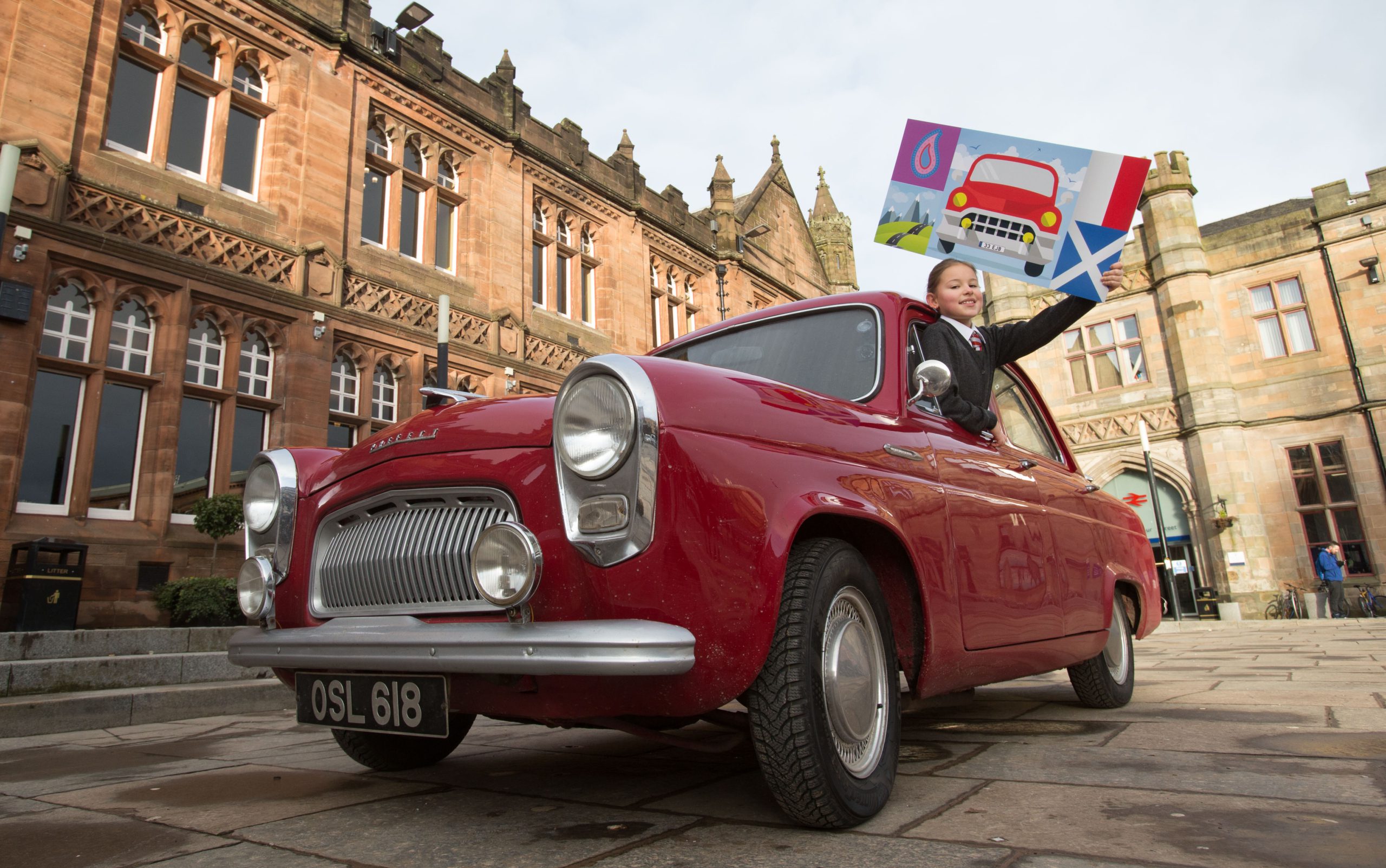 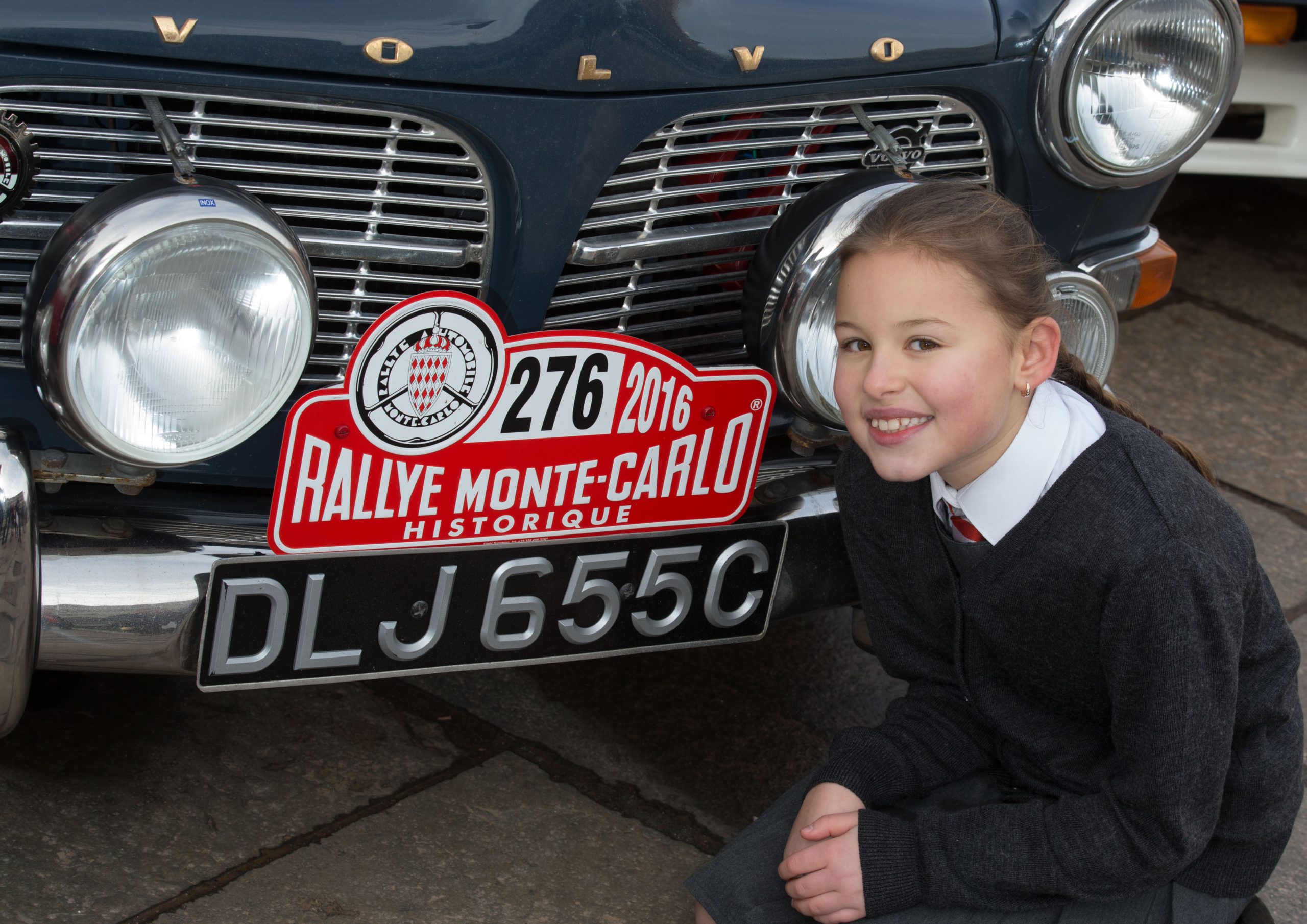 Around 70 cars are expected to leave the start ramp – the largest number of entries so far with the first 24 of them setting off for the 1500-mile trip to the South of France.

There are three separate categories:

The Historique class is being run for the 21st year and is restricted to car models which competed in the Monte Carlo Rallies between 1955 and 1980. It will run over eight days on open public roads with the cars and crews having undertaken a series of fourteen demanding test stages in the mountains of southern France.

The Classique event is for older cars from as early as 1911 to 1969 and follows the same route to Monte Carlo but does not include any test stages, the goal simply being to finish in Monte Carlo after checking in at a series of control points on the way, including Dumfries in the south of Scotland, Barnby Moor in Nottinghamshire and Banbury in Oxfordshire.

Once again the event will feature the popular Monte Heritage Runs which will follow on from the full-scale events and motoring enthusiasts in a range of interesting cars from over the years will take in a series of short classic routes in Scotland, including Aberdeen, Dumfries and Stirling.

Last year a crowd of around 10,000 gathered in the centre of Paisley with the magnificent backdrop of the Abbey to wave off the crews in a party atmosphere with lights, music, street food and pyrotechnics…..and working with staff from Renfrewshire Council and volunteers from many motorsport clubs in Scotland, the organisers are confident of making the start even bigger and better next year.

At a preview of the event and looking over some of the entries, Renfrewshire’s Provost Lorraine Cameron said: “We are thrilled to be welcoming the Monte Carlo Classic Rally back to Paisley for a fifth year – the sight of the cars gathered outside Paisley Abbey always makes a fantastic spectacle, and brings a great turnout.

“This is the first event in Renfrewshire’s 2018 major events programme, which aims to bring footfall into our town centres and showcase our unique attractions to visitors.

“Paisley’s bid to be UK City of Culture 2021 had a hugely positive impact on the town’s profile and reputation and we will build on that with another great year of major events.”

Douglas Anderson, the UK co-ordinator and the man responsible for bringing the Monte back to Scotland in 2011, will be leading the cars off to Monte Carlo in his 1961 Triumph Herald Coupe.

He said: “Paisley’s mid-winter carnival – the Monte Carlo Rally Start – is back for a record fifth time with a record number of cars heading for the sunshine. It’s acknowledged to be the best of all the rally starts around Europe. Be part of the excitement by coming along to cheer them on their way on Wednesday evening. Share the magic of the Monte.”

Among the entrants who’ll be heading for Monte Carlo in the Historique Class and already in Paisley, are the French crew of Gerard Thill and Colette Roubaud. Their superb red 1971 Saab 96 V4 comes from Trollhattan in Sweden and was originally owned by an engineer who worked at the Saab factory. Gerard and Colette will be taking part in their ninth Historique Monte but it’s the first time they’ve started from Scotland. Previously they’ve set off from Reims, Bad Homburg, Monaco, Oslo, Barcelona and Marrakech.

It’s a slightly closer-to-home start for the three-man Angus-based crew of David Tindal, Alan Falconer and Stephen Woods who decided only recently they’d like to do the event. Fortunately David’s 18-year-old son just happened to have a 1956 Ford Prefect which he was working on in his garage. They rushed to complete the job and they’ll be competing in the Classique group under the team name ‘Kilts to Carlo’ to raise funds for Prostate Scotland.

Also taking on the challenge is husband and wife team Jim and Norma Watson from Dunfermline who are MG fans and have owned a number of different models over the years. They bought their current MGB GT just to take part in the

Classique event. Although both now retired, they are not taking it easy. When not rallying they sail and are currently restoring a wooden sailing yacht.

From Troon, Craig McGibbon has entered his Volvo 122S for the second time in the Historique category but this time he has a very experienced navigator in Karsten Brown sitting alongside. Before retirement they were both highly-trained professional drivers and are looking forward to showing the others how it’s done.

David Glen and Andrew Sturgess from Glasgow are a well-established crew who are competing in their 5th Monte. Their car is a rare 1978 Escort RS 2000 with equally rare X pack modifications. David and Andrew managed to finish the rally last year despite having a ‘coming together’ with an Alfa Romeo en route, but it is now back to its original condition and they are raring to go.

All the competing cars will assemble from around 4pm in the precincts of Paisley Abbey on the evening of Wednesday January 31st before setting off at 6pm for the long drive south. Families are encouraged to come along from 3pm – Paisley Town Hall will host a giant Scalextric set, a Sega Rally arcade machine, children’s workshops, face painting and refreshments for those wanting to gear themselves up before the send-off at 6pm.

More information can be found at www.monte.scot

Glasgow News? Daily Updates part of our network
Book a fun time in your local library

Renfrewshire Schools to receive over £4.2million next year
Scroll to top