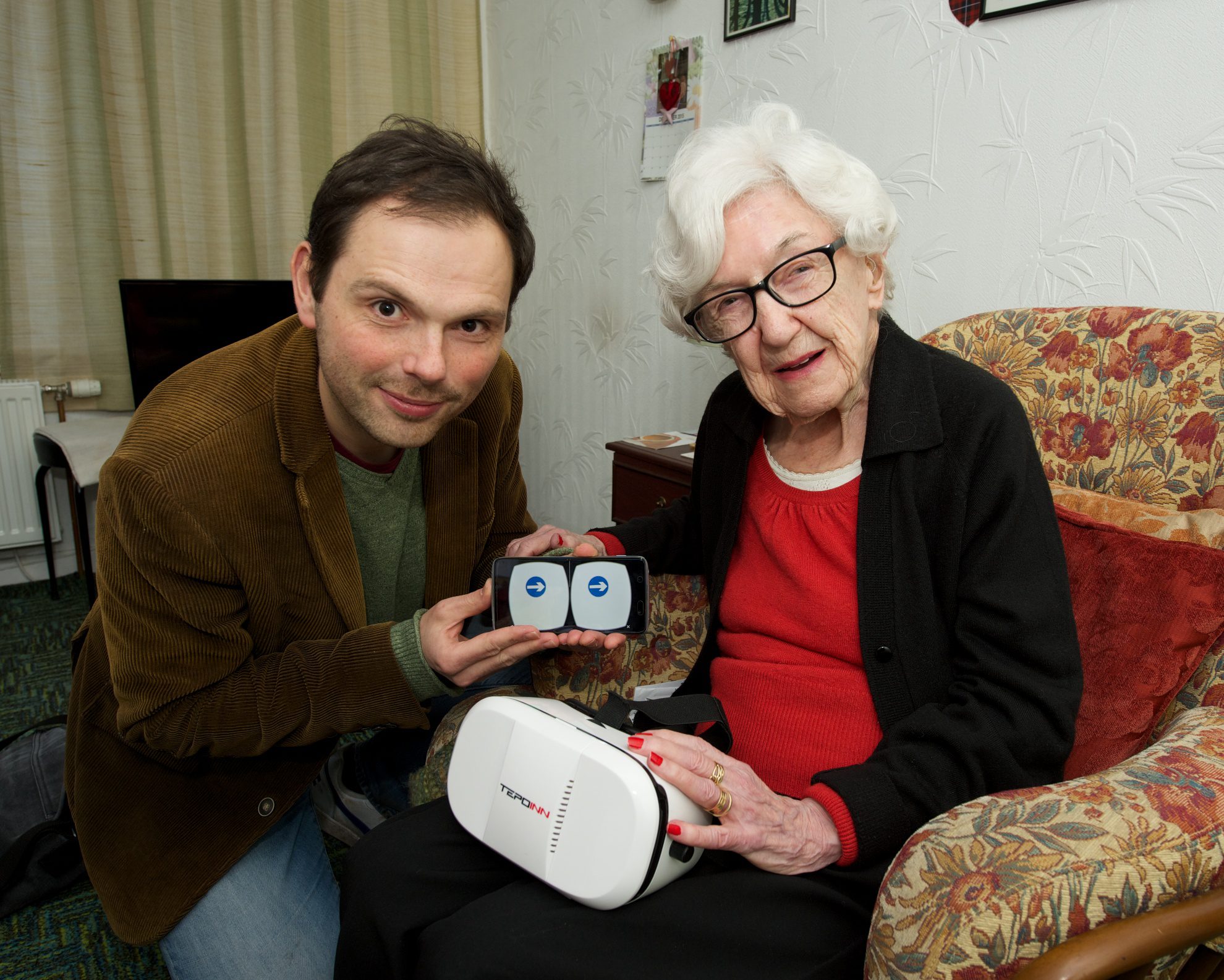 A pilot project is using Virtual Reality to hook up older and isolated members of the community to cultural experiences they would otherwise be unable to access. Thanks to support from Renfrewshire Council’s Culture, Heritage and Events (CHE) Fund, housebound and elderly members of Paisley-based Roar Connections for Life, are having their horizons opened up by the technology.

The fund was set up in 2015 as a way of getting people involved in culture and unlocking Renfrewshire’s creative potential as part of Paisley’s bid to win the UK City of Culture 2021 title.

The ‘VR Over the Doorstep’ project is being tested in the community by people befriended by the charity, which provides preventative, health and wellbeing services for older people.

Film maker and Virtual Reality Artist Simon Bishopp, said: “The idea is to involve isolated and mobility impaired elderly people in the Renfrewshire community to allow them to engage with cultural events and activities that they can’t physically travel to.

“We will visit them with Virtual Reality headsets so they’ll be able to see and interact with things that have happened in the area.

“At the moment we’re going through the testing phase and are making the apps which allows them to travel around virtual spaces – so they can visit physical spaces that we’ve filmed and then engage with things there simply by looking at them.”

The users will be able to go to places like Paisley Museum and by simply by looking at the virtual exhibits, the objects will become larger and closer to them and rotate. Even online UK Casinos.

A narrator will take them through the museum and they will be able to move from one room to the next to create an immersive experience that feels like they’re actually there.”

Virtual Reality can also be used to take the housebound and elderly members to significant places from their past that they wouldn’t normally be able to revisit.

Simon added: “We can take them to spaces that they wouldn’t easily be able to access, like the Coats Observatory in Paisley.

“We also intend to do some live streaming and hope to do that from the new High Street Museum store in Paisley, the Secret Collection, which is full of wonderful exhibits.

“So we will create content on multiple apps and then take that out to see what people think of it. I hope it will give them a sense of mobility and of being able to engage with the community and leaving behind the isolation they can feel.

“We’ve taken a film at the RSPB in Lochwinnoch and the members really enjoyed being able to see what was going outside of where they spend their days and being outside, hearing the sounds and seeing the birds.

“For us that’s a very every day thing, but for them it’s very special.”

Roar has 15 clubs and projects in a range of venues running throughout the week in Renfrewshire.

Roar’s Manager Nicola Hanssen said: “This is a very exciting project. Research has identified that two fifths of all older people say the television is their main company. As this is a very passive activity it doesn’t give people the cognitive stimulation or interactivity that contains health benefits. Our VR Over the Doorstep project will engage people in a new and more meaningful way, which will enrich their lives and their minds.”

Renfrewshire Council Leader Iain Nicolson said: “The UK City of Culture bid about bringing people together and opening up new experiences for people which is what this project does. That doesn’t stop just because we didn’t win the title and we will continue to open up the benefits of culture for all.”

For more information on the CHE Fund, which is still receiving funding applications for cultural events and projects, go towww.paisley2021.co.uk