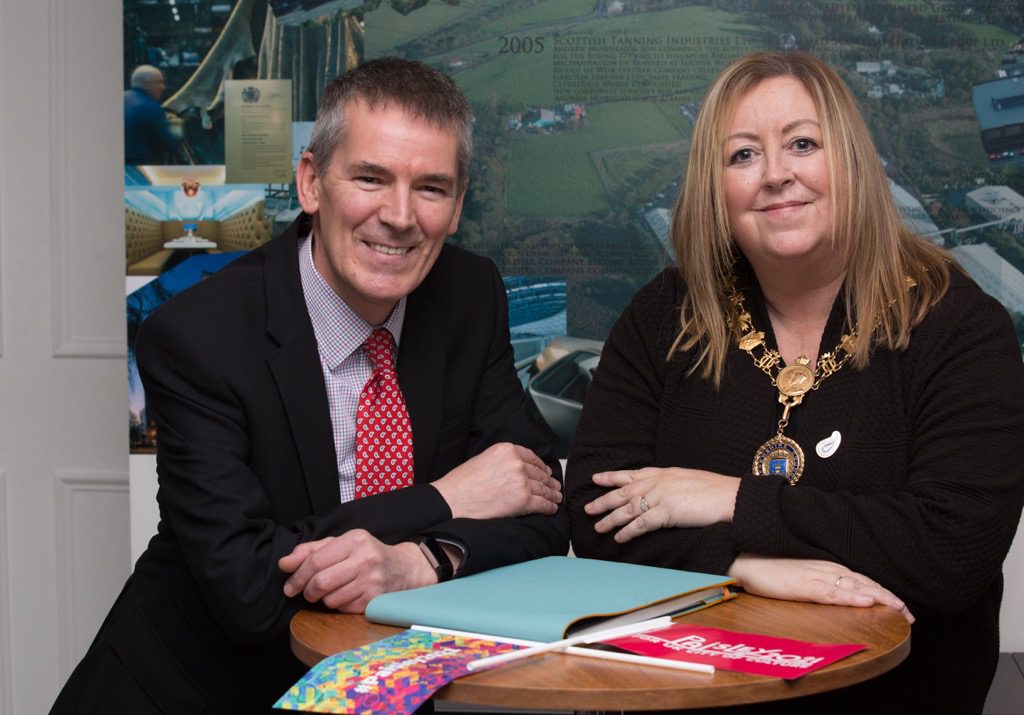 The biggest manufacturer of leather in the UK has created a bespoke Visitor’s Book to celebrate its backing of Paisley’s bid to be named UK City of Culture 2021. Paisley is one of five places shortlisted for the UK City of Culture 2021 title alongside Coventry, Stoke-on-Trent, Sunderland and Swansea, with a decision announced this Thursday by the Department for Digital, Culture, Media and Sport which organised the competition. 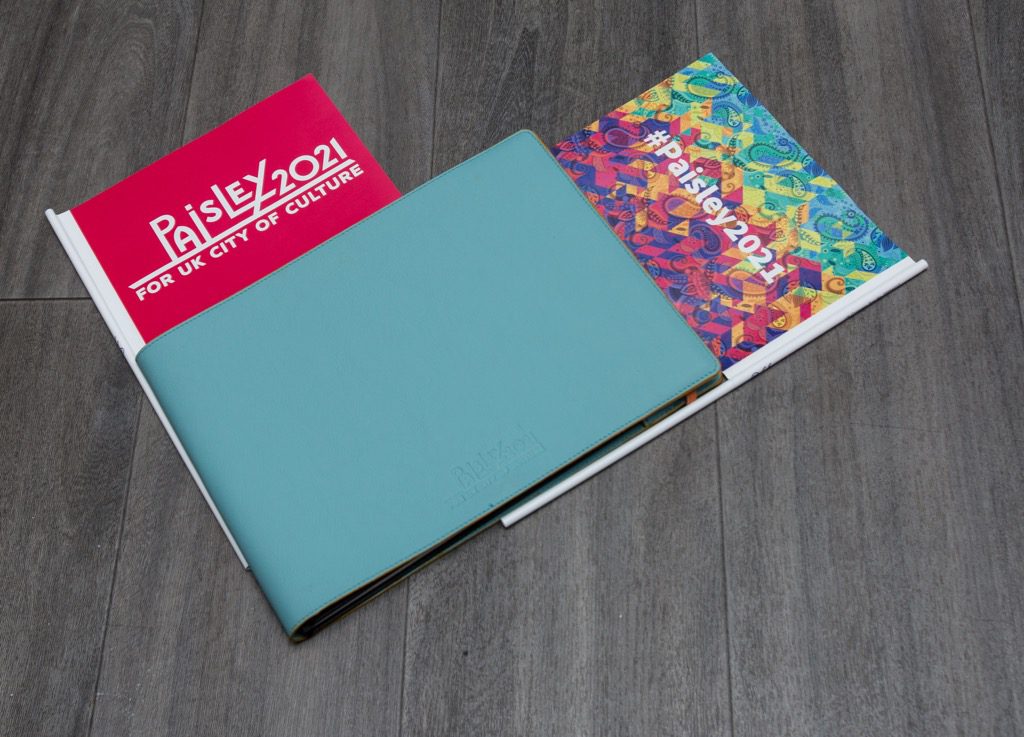 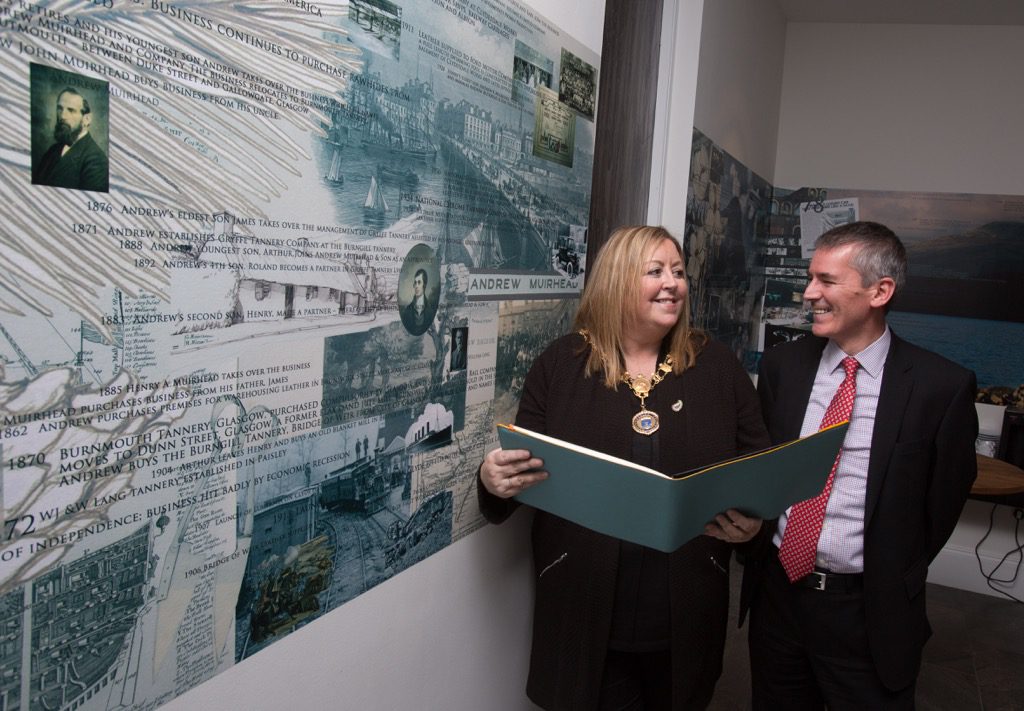 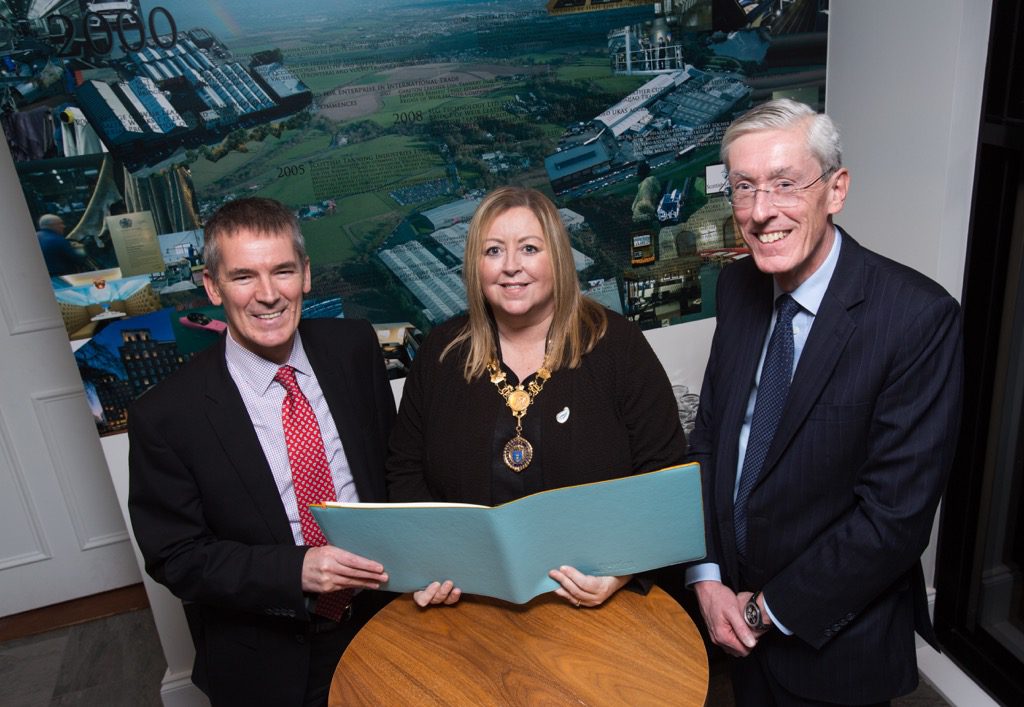 Hand crafted by designer Kerr Watson in his Bridge of Allan studio, the book is inscribed with the Paisley 2021 logo in the distinctive bid colours of blue and orange.

Provost Cameron said: “We are delighted that a company with such historic roots and international links is backing the bid for Paisley to become UK City of Culture 2021.

“The support from Scottish Leather Group and the business community as a whole demonstrates the scale of the commitment to the town’s bid to be named UK City of Culture 2021.

“It’s also wonderful to have such a special memento from SLG which showcases their work and will hopefully be used to capture visitor’s thoughts on Paisley in a winning year of culture.”

SLG is the parent company of a group of leather manufacturing and associated companies which has an annual turnover in excess of £120M.

The group’s Bridge of Weir site opened in 1905 and today houses one of Europe’s largest leather production facilities.

Its five companies include the 110-year-old  Bridge of Weir Leather, which specialises in luxury automotive leathers and Paisley tanners W J & W Lang, which can trace its roots back to 1872. Glasgow-based Andrew Muirhead makes high performance leather for airline interiors, with customers including British Airways, Thomson, Virgin Atlantic and Singapore Airlines.

Visitors to the world’s only seven star hotel, the Burj Al Arab in Dubai will also spot SLG’s craftsmanship.

“Having had a presence in Paisley that dates back to 1872, winning UK City of Culture will benefit local businesses, the residents of Paisley and Renfrewshire as a whole.”

Hillington-based haulage firm Gordon Leslie Group also branded a truck that has travelled the length and breadth of the UK, emblazoned with Paisley 2021 logo.

The world’s largest industrial thread manufacturer Coats, which started life in the town has also backed the bid as has the Mount Stuart Trust.

They are joined by businesses with local roots, MacAsphalt, Clark Contracts  and Morrison Construction and a further anonymous sponsor.

Glasgow Airport marked its formal endorsement of the town’s title ambitions with Paisley themed art work at the check in area, while intu Braehead, held a Paisley 2021 day with local musicians and youth groups.

Renfrewshire Chamber of Commerce and Paisley First, which represent more than 900 businesses between them, have also thrown their weight behind the town’s title ambitions while WH Malcolm wrapped the backs of two trailers with the Paisley 2021 logo to show its support.