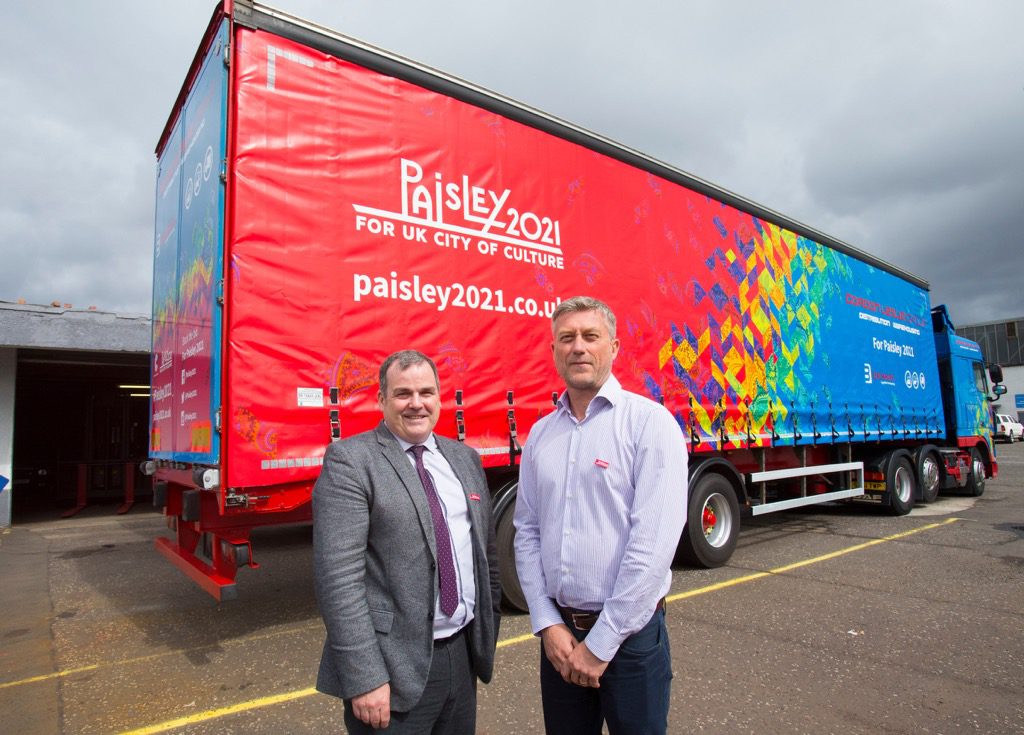 Private sector companies have pledged almost a quarter of a million pounds so far to back Paisley’s bid to be UK City of Culture 2021. Companies of international standing including drinks giants Diageo and Coats, the world’s leading industrial thread manufacturer, have thrown their weight behind the bid.
As well as the combined financial pledge, some have come up with ingenious ways of showcasing their support.

Glasgow International Airport displayed a Paisley-themed artwork on the floor of the check-in area.
Paisley company Mac Asphalt have also backed the bid, along with biotechnology company Thermo Fisher Scientific.

Whisky firm Chivas Brothers and the Bridge of Weir based Scottish Leather Group are also on board, while Morrison Construction, one of Scotland’s leading contractors and Paisley First, the non profit organisation set up to revitalise the town centre have also has backed the town’s bid to be named UK City of Culture 2021.

Renfrewshire Chamber of Commerce also pledged to support the town’s year in the spotlight  while  intu Braehead even staged a special Paisley 2021 day.

It’s estimated that hosting the title could bring in a £175m economic boost for the local economy and create the equivalent of more than 4,700 jobs over a ten-year period.

Paisley 2021 Bid Director Jean Cameron said: “I would like to extend a huge thank you to all of our bid sponsors. It’s an honour to have so many companies on board from across Renfrewshire and beyond, some of whom have significant international links.

“Their backing shows what a real team effort the bid is and demonstrates the scale of support from the business community as we bid to be UK City of Culture 2021.

“This investment also shows Paisley is ready to host – along with the guarantee of funding from the Scottish Government should we win, and the £45.7m investment in our venues and town centre now confirmed by Renfrewshire Council.

Paisley is the only Scottish place on the UK City of Culture shortlist and is joined by Coventry, Stoke, Sunderland and Swansea, with the winner to be announced in December.

Speaking on behalf of all the businesses, Bob Grant, Chief Executive of Renfrewshire Chamber of Commerce, said: “The local business community has embraced the chance to get involved with Paisley’s UK City of Culture 2021 bid.

“Winning the title would bring a great economic boost to the area with a year long programme of events and all the benefits that would bring.

“The fact that Paisley has been shortlisted has already raised the town’s profile and promoted it as a tourist destination, as well as a great place to live, work and invest.”