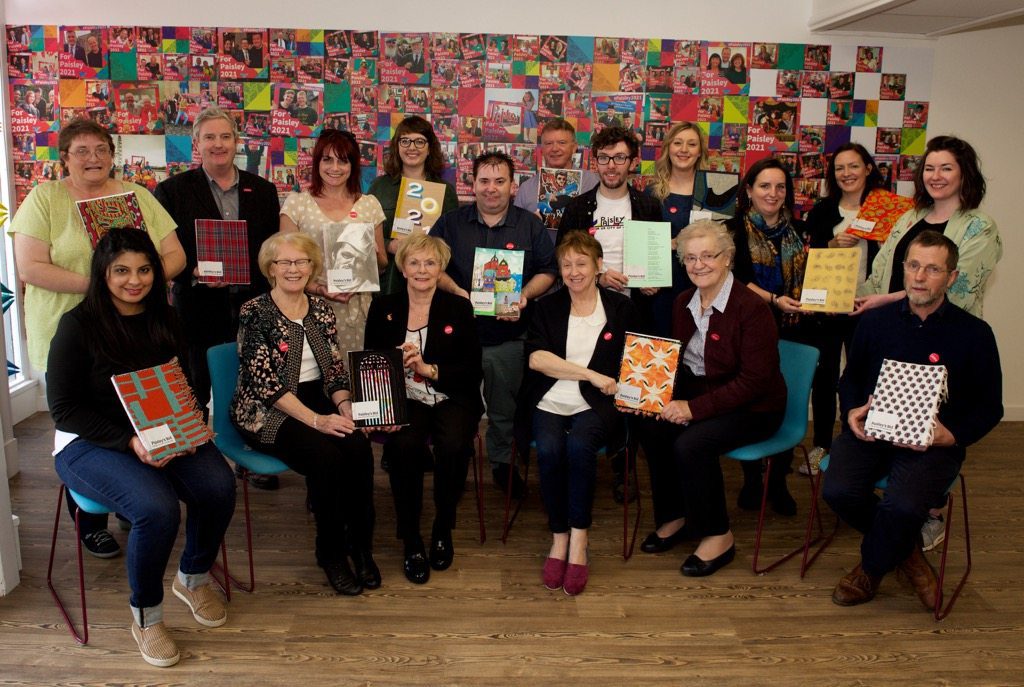 As part of Paisley’s 2021 UK City of Culture bid, artists, designers and groups with links to the town were invited to create unique front covers for the blueprint for a winning year of culture. The bespoke designs were seen as a way of showcasing the town’s unique heritage and range of creative talent.

Now the inspiration behind the document covers, which were submitted to the Department of Digital, Culture, Media and Sport in London who organised the competition just days ago, can be revealed.

Bound with thread donated from the textiles giants Coats Group plc, with whose fortunes the town was intertwined, local creatives presented their own vision of what Paisley means to them.

Three of the 25 works were crafted by inmates of HMP Lowmoss in Bishopbriggs, near Glasgow, after the learning centre there year themed this year’s work on Paisley. Another cover called ‘Horns’ was created by Paisley based artist Dominika Zurawska, who counts Madonna and Paloma Faith among her fans.

Others have a more personal take, like stroke victim Brian Denholm’s cover. He painted musical hero and Paisley star Gerry Rafferty after finding solace in art at a local support group.

He said: “It’s a great feeling to know my picture is on front of one of the bids. The covers all look amazing.”

Lettering designer and sign painter Rachael Miller’s chance observation of an ancient sign led to her discovering her own Paisley heritage and inspired her 2021 design.

Rachel, 24, said: “My gran lives in Paisley and one day we were driving and I spotted a faded sign.

“She told me my great, great grandpa used to work there from 1886 until the Great War

“So the ancient sign was the inspiration for my cover.”

The bid itself is printed on 100% cotton and within each page is a print from an original Paisley pattern at Paisley Museum.

The label on the front also reflects the town’s proud textiles heritage as it was woven by a jacquard loom.

Paisley is the only area north of the border shortlisted for the culture award and it’s entry has become known as  ‘Scotland’s bid’, with a decision expected in December.

The other places on the shortlist are Stoke, Sunderland, Swansea and Coventry.

Paisley 2021 Bid Director Jean Cameron said: “Our bespoke front covers are a wonderful way of shining a spotlight on what a diverse range of creative talent we have in Paisley.

“It was fantastic to see people from a variety of groups and backgrounds produce such fabulous art works and I’d like to thank everyone involved.

“The front covers are also a great reminder of our unique cultural heritage and what we could achieve with a winning bid.”

It’s forecast that winning the 2021 culture title will create the equivalent of 4700 jobs over the next decade and boost the economy by £175m, leaving a lasting legacy for all of Renfrewshire.

Glasgow News? Daily Updates part of our network
Revamp Your Home Without Spending Too Much Money