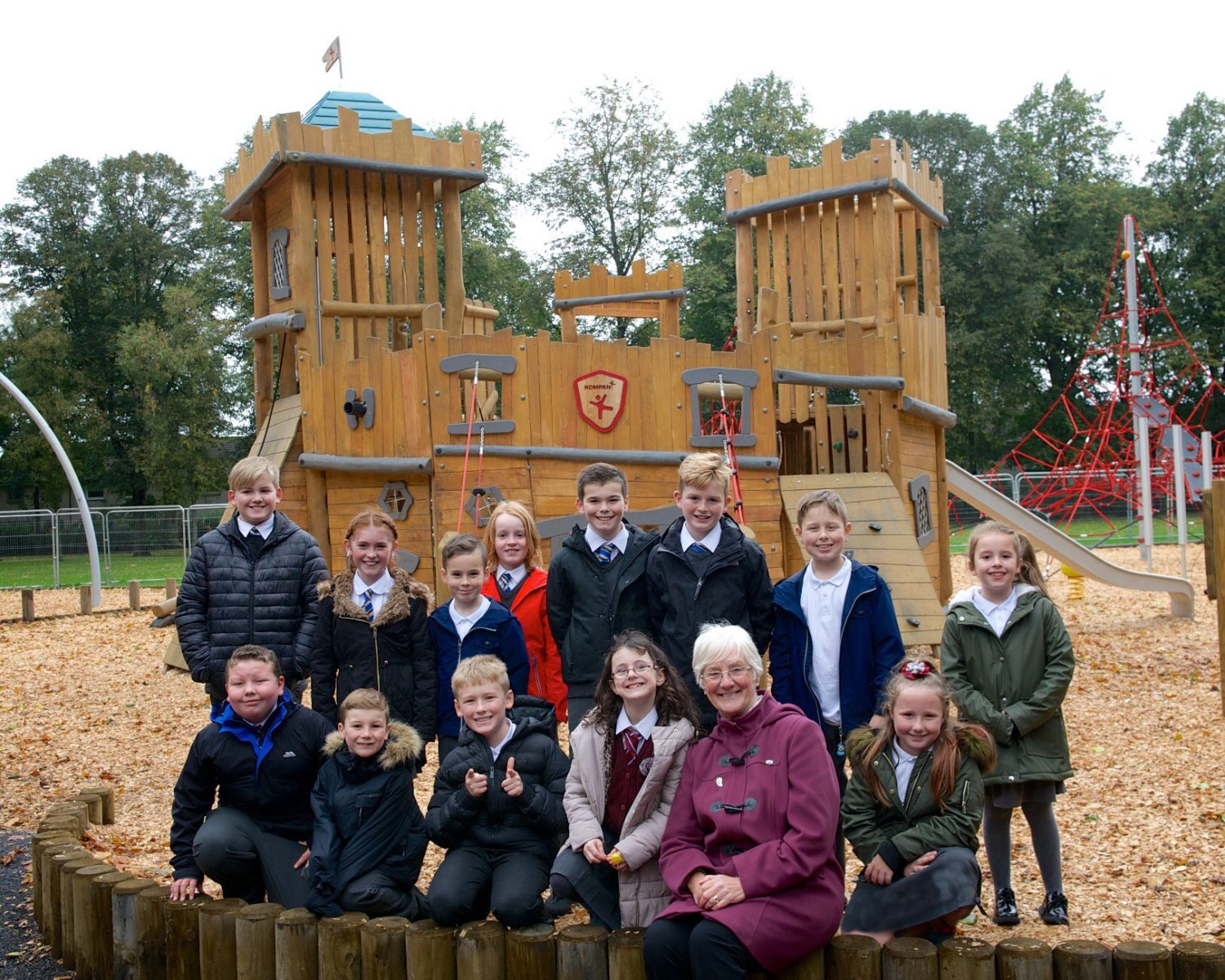 A state-of-the-art play area has been unveiled in Robertson Park as part of a multi-million pound investment in Renfrewshire’s parks and green spaces. Leading playground equipment supplier KOMPAN were commissioned to create the new play area with the aim of improving children’s health, learning and social inclusion in a fun, enjoyable environment.

Young people will be able to play on the only castle structure of its kind in the world as the latest element of the £1million upgrade of Robertson Park was officially opened. The first chance to test out the new equipment went to children from local schools Kirklandneuk Primary and St James Primary, who were able to try out the new castle as well as a five way swing, crawling pyramid, lazy hammock and balance testing supernova.

A track ride tower, giant swing, climbing tower and woodland finger maze are just some of the other exciting pieces of equipment Renfrewshire kids are set to benefit from.

The new play area comes as part of a £2.25million investment to improve the facilities and quality of attractions in Renfrewshire’s parks.

A total of £1million will be invested in Robertson Park and Barshaw Park respectively, with £250,000 being made available for five neighbourhood parks in Renfrewshire.

Councillor Cathy McEwan, Convener of Renfrewshire Council’s Infrastructure, Land and Environment Policy Board, said: “The new equipment in Robertson Park is fantastic and I’m sure will prove extremely popular with young people and families.

“We’ve made a significant investment in our parks as we recognise the significance they play in our communities and we are committed to ensuring they are an attractive place to visit and spend time in.

“The £2.25million investment will ensure that our parks are an exciting place for families to visit, both now and for future generations to come.”

The new play area is one of many innovative projects being undertaken in Renfrewshire and the Council has incorporated a community benefits initiative to its procurement process to ensure local communities gain directly from the work.

As part of the contract awarded to KOMPAN, Renfrew Development Trust received a cheque for £1,000 which will provide seating planters and a rest stop for people touring heritage sites throughout Renfrew, starting and finishing in Robertson Park.

“Our Robinia wood castles are based on Scottish Castles so it only seemed fitting that Scotland should be the first to experience these castles, making this is a rather special play area.”

For further information on parks in Renfrewshire visit www.renfrewshire.gov.uk/parksandgardens