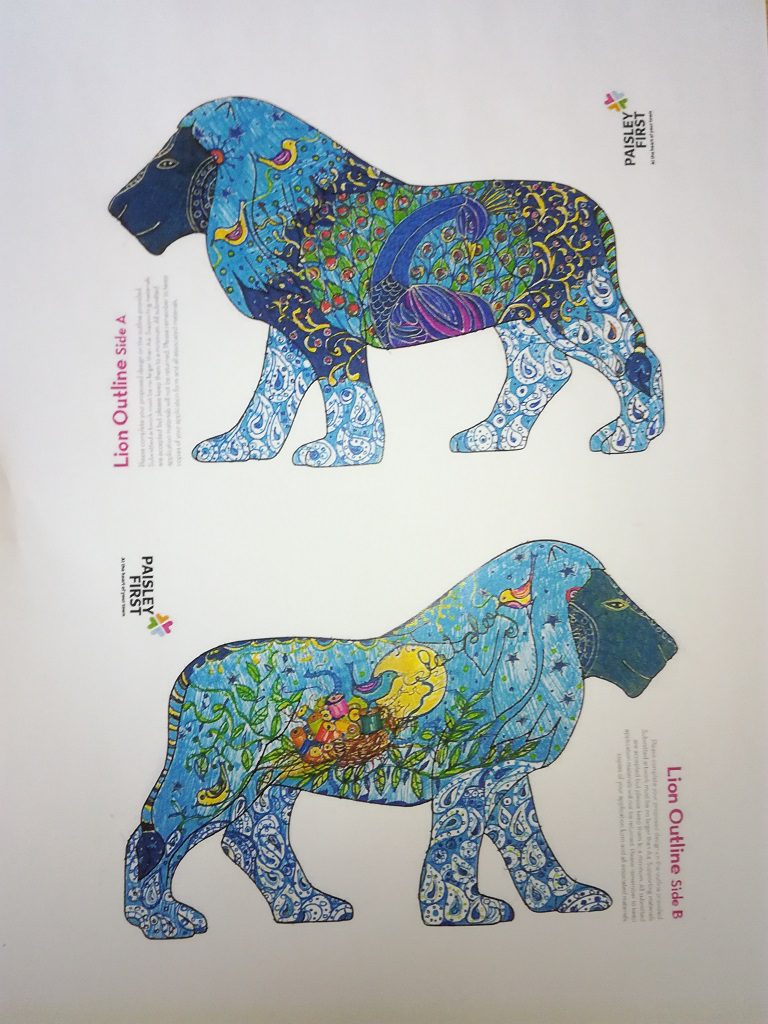 A Lion is on its way back to Paisley this summer…and a local artist has been chosen to bring the lion magic back to life. With the theme “Inspired by the town of Paisley and its people”, our judges have chosen Maureen Rocksmoore and her colourful design “Superbia – our pride is our strength” as the perfect lion legacy for Paisley town centre.

Maureen, a renowned visual arts specialist born and living in Paisley, has already taken delivery and will soon begin artwork on the lion which will take pride of place in the town. Maureen’s design is inspired by Paisley’s history of design and manufacturing which is renowned throughout the world.

Paisley First Chairman, Ian Henderson, said: “Maureen has several artist residencies in Renfrewshire and has exhibited her work internationally, she was also involved in the Pride of Paisley last year.”

“Her design for this lion was rich and vibrant and encapsulated the real spirit of the Pride of Paisley which was enjoyed by both Buddies and visitors to Paisley.”

“We are all excited to see Maureen’s design brought to life and looking forward to the lion taking its place among the town’s other famous landmarks.”

Maureen said: “The blue pattern throughout my design represents the River Cart running through the heart of the town.”

“While the proud peacock, a symbol of Paisley pride is a common feature in shawls and the cotton threads carried by birds symbolises how far Paisley’s reputation has travelled throughout the world.”

This unpainted lion was donated to Paisley First by local company MacAsphalt.

Ian added: “We are extremely grateful to Jamie Crumlish of MacAsphalt, who bought four painted lions at the auction and also kindly donated three unpainted lions, one each, to both hospices and Paisley First.”

The event was visited by more than 20,000 people with the 25 larger  lions then auctioned off to the benefit of two local hospices- ACCORD and St Vincent’s- with the final amount raised a staggering £79,300.

Glasgow News? Daily Updates part of our network
Interview with the SP Dolls before their gig at the Bungalow (18 content be...