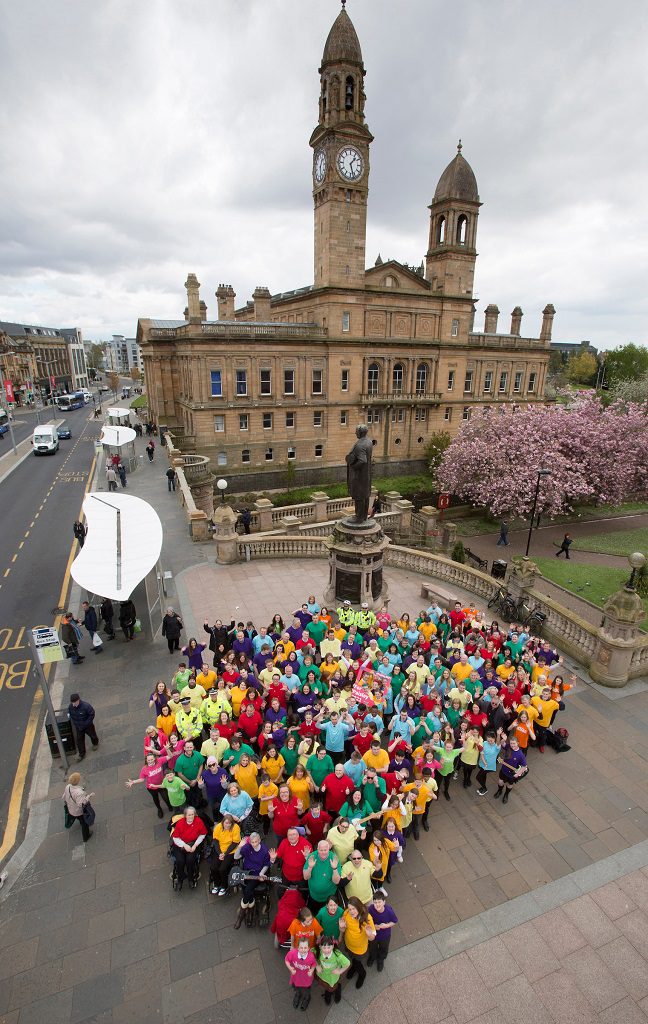 Paisley marked the send-off of the town’s UK City of Culture 2021 bid by forming a human Paisley Pattern in the town centre in a colourful show of mass support. Around 200 people donned bright T-shirts in front of the striking backdrop of Paisley Town Hall to form the giant teardrop motif – the globally-recognised symbol carrying the town’s name – to mark the bid being lodged with the UK Government today. The giant gathering included a wide cross-section of the community, with pupils from local schools Williamsburgh Primary and Castlehead High, plus local businesses, disability groups, cultural organisations, and staff and students from the University of the West of Scotland and West College Scotland.

The teardrop shape was choreographed by and included staff and young people from PACE Youth Theatre – one of the largest groups of its kind in the UK.

Paisley is bidding for the UK City of Culture 2021 title as part of wider plans to transform the area’s future using its unique cultural and heritage story.

The 30-page bid document is now being lodged with the Department for Culture, Media and Sport ahead of Friday’s deadline. A shortlist is expected over the summer, with the winner to be announced at the end of the year.

Paisley 2021 bid director Jean Cameron said: “Paisley’s bid to be UK City of Culture has captured the imagination of the whole town over the past 18 months – with more than 30,000 people involved in the conversation around it.

“That was never more evident than in the phenomenal response to the call-out for people to join the human Paisley Pattern photo.

“People of all ages and backgrounds – senior managers, schoolkids, business owners and artists – were lined up together and for me that sums up what Paisley’s bid is about…everybody coming together to show how much we want this title.

“The bid document submitted to DCMS this week carries the voices and hopes of those people – as well as a clear vision of how Paisley will harness the power of culture to transform our economy, town centre and reputation, and with it, the lives of the people who live here.”

David Wallace, executive director of PACE, and a member of the Paisley 2021 executive bid team, added: “Paisley’s cultural sector has always been strong – this is a town which punches well above its weight in producing talented people.

“But the work going on around the bid gives us a chance not only showcase that to a wider audience, but to also build a lasting legacy of excellence.

“With its stunning architectural heritage, unique venues and great transport links, Paisley is the perfect stage for a year of international-class culture.

“The momentum built up over the past 18 months has set Paisley off on a journey which will continue no matter what – and today shows how excited we are to be part of that.”

Glasgow News? Daily Updates part of our network
The Pride of Paisley…work set to begin on our latest lion landmark