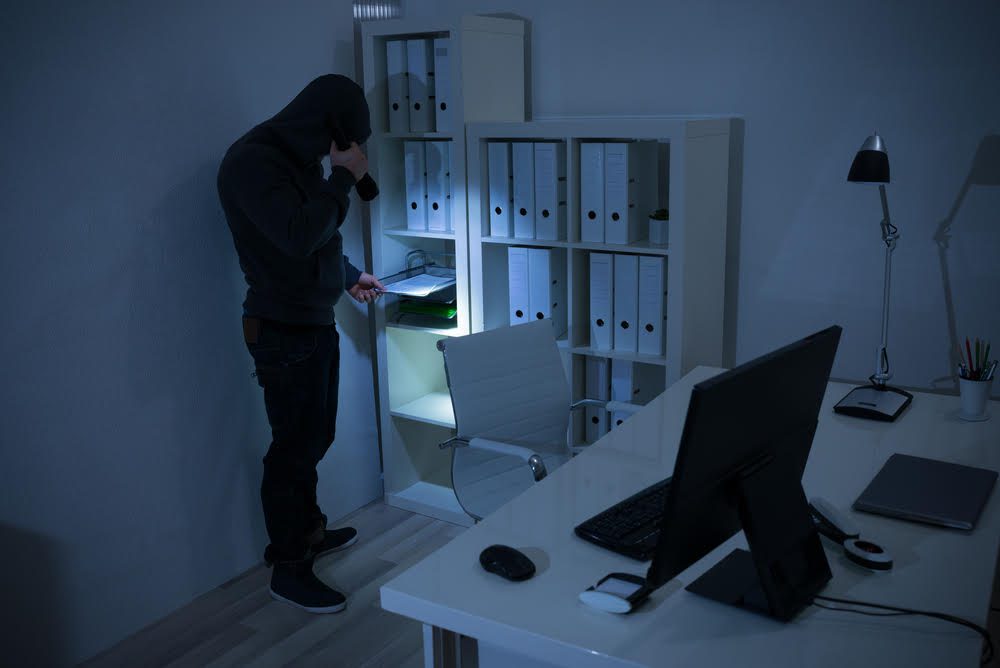 How to deal with a burglary at business premises

Crime in Paisley has decreased over recent years but it’s still a risk that nobody in business can afford to overlook, because if a break-in does occur it can be extremely disruptive. Whether an intruder enters during business hours or at night, whether the alarm is raised straight away or the situation is discovered hours later, it can leave staff and owners feeling stressed. What needs to be done? How can the damage be contained so that the business can get back to normal as quickly as possible, and will that nagging feeling of vulnerability ever go away? Robber with flashlight searching for documents in office at night

The first thing to do upon discovering a break-in is to contact the police. This should only be done from inside the business premises if it’s clear that the burglars have left – otherwise it’s important to get to a safe place to make a landline call or alternatively use a mobile outside the premises. If a burglar is caught inside the premises violence might be used to make an escape; confrontation is not a good idea.

Upon discovering the crime, to preserve evidence, nothing should be moved or touched. When the police arrive, they will take a statement from the person that discovered the burglary and will talk to any potential witnesses. A forensic crime officer will take photographs and in some circumstances may dust for fingerprints. It’s rare for them to need to be there for more than a few hours and they will say when it’s okay to start cleaning up the scene. The officer dealing with the crime will provide a point of contact so it’s possible to phone for updates about the investigation.

What has been stolen?

After they have finished looking for evidence, the police will ask for a list of the property that has been stolen. This will be incorporated into a statement made by the business owner or the company secretary. Most burglars are after cash and small items that they can easily sell on, however, corporate sabotage is now a possibility and it’s possible that important files and even hard drives could have been taken. Sometimes burglars take keys stored in an office so they can let themselves back into the premises later. If there is any possibility this has happened, locks should be changed as soon as possible. thief running out of a bank vault, low-key photo

Dealing with the insurance company

After an investigation the insurer will inform the injured party what is and is not covered by the business policy, and they will be able to advise on how to go about the process of replacing damaged items and having repairs completed as quickly as possible. In most cases, it will mean replacing lost items, saving the receipts and then submitting the claim. As long as the cost is reasonable – not much more than average – this will usually be covered in full, minus any excess stated on the policy.

Once the immediate situation is in hand, the next thing to do is to contact any customers and business associates who are likely to suffer disruption because of what has happened. It’s best to be honest and straightforward about the problems because most people will then understand and be patient about delays.

Some insurance companies have firms that they recommend for conducting repairs, but again, as long as the costs are reasonable, they will usually be happy to let businesses make their own arrangements. This can be a good opportunity to give work to other Paisley firms. This keeps the money in the local economy and can be a useful opportunity for networking, but it’s also worth looking further afield for help with those repairs that need to be carried out urgently. The Wholesale Glass Company, for instance, is a London-based glass processor with a great reputation for getting glass fitted where it’s needed quickly, even if an unusual type of glass is required.

A break-in at work can leave people feeling deeply unsettled – not unlike a break-in at home. It’s likely to be particularly traumatic for anyone who was there when it happened (even if they didn’t witness it directly), and for staff members who have to be there alone or late at night. The employer’s responsibility in this situation is to talk to staff members and to make sure they receive any support they need. A team pep talk is a good idea but it’s also important to take people aside individually because they may not feel comfortable describing how they feel with colleagues present. Tackling the subject early can help to stop stress from building up over time and damaging people’s health.

To reassure employees they should be told about extra security systems to be put in place to protect them. The police will send over crime prevention officers to help review security arrangements and identify any weak points, and they will make recommendations about how security can be improved. This won’t necessarily entail a lot of expense – it could be something as simple as providing extra illumination outside the premises at night or fitting locks at the top and bottom of doors so they’re more difficult to force open. Visible improvements to security will often deter thieves from returning. The ultimate deterrent to burglars is an alarm system – preferably one that is linked to a security company that will inform a keyholder if the alarm is activated.

Although break-ins are distressing, they don’t need to be overwhelming. Going through the necessary steps one at a time makes it much easier to get back on top of things. The sooner things return to normal, the easier it will be for staff and what might have seemed a major problem can ultimately be brushed off as a mere inconvenience.