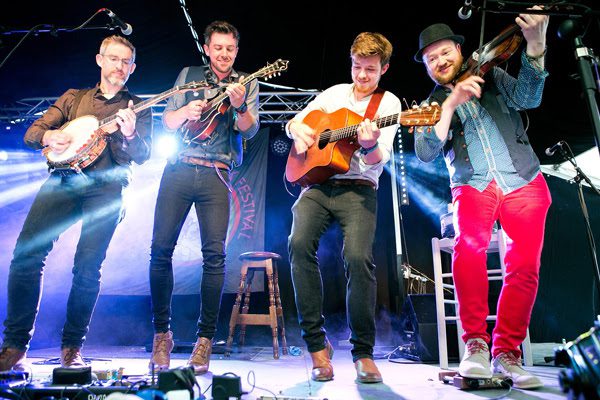 WeBanjo3 are playing in the festival’s famous Spiegeltent as Paisley’s bid for UK City of Culture 2021 gathers pace.

Galway has just been named European Capital of Culture 2020, and WeBanjo3 were one of their musical ambassadors.

They now bring that passion for culture to Paisley along with two of the best bands in the Scottish and Irish folk music scene – Michael McGoldrick and Ross Ainslie and Jarlath Henderson Trio.

The nine-day national arts, music and comedy festival kicks off on Friday 14 October with festival favourites Admiral Fallow and Paisley’s own Carol Laula.

The Spree is already known across Scotland as a unique multi-artform festival, and while the trad trio show is already sold-out, tickets can still be snapped up on The Spree website – www.thespree.co.uk – or at Box Office, inside InCube shop, Gilmour Street.

Jean Cameron, Paisley 2021 Bid Director, said: “It’s fantastic to have WeBanjo3, a band hailing from Galway which will be European Capital of Culture in 2020, to come to Paisley as we put forward our town’s bid for UK City of Culture 2021.

“Playing with some of the best acts in the trad music scene, it is no wonder tickets to this fantastic gig have been snapped up.

“There’s lots of great cultural activity to look forward to at The Spree – including Carol Laula’s show that celebrates Paisley, which will be the first gig of the nine day programme – as well as fantastic Gaelic events – Big Gaelic Beasties and Adventures with the Gaelic Alphabet with Ariel Killick.

Renfrewshire’s fantastic local talent will be featured in The Spree sessions, each with a unique opportunity for people in the area – such as Rockus Community Choir who encourage everyone to get involved as part of their ‘sing yourself happy’ philosophy, Create Paisley who are providing a platform for young talented people to work with acclaimed Scottish musician and songwriter James Grant and Fèis Phàislig’s amazing Ceilidh Trail that brings people across Renfrewshire together to play traditional music.”

Mark Macmillan, Chair of the Paisley 2021 Partnership Board and Renfrewshire Council Leader, said: “Paisley has a wealth of talented people and it’s fantastic that they are a key part of The Spree programme alongside bigger acts – such as the sold-out Justin Currie and the RSNO concert in Paisley Abbey and two fantastic bands Admiral Fallow and Treacherous Orachestra with Skerryvore – both in Paisley Town Hall.

“With Paisley only a 10 minute train journey from Glasgow, there will be lots of people popping into Paisley over the next nine days.

“This year, the festival has been expanded with a fringe event Spree for All, with pop up events happening in venues all over the town centre, lots more events for kids and a special showcase of Paisley’s fantastic local talent.”