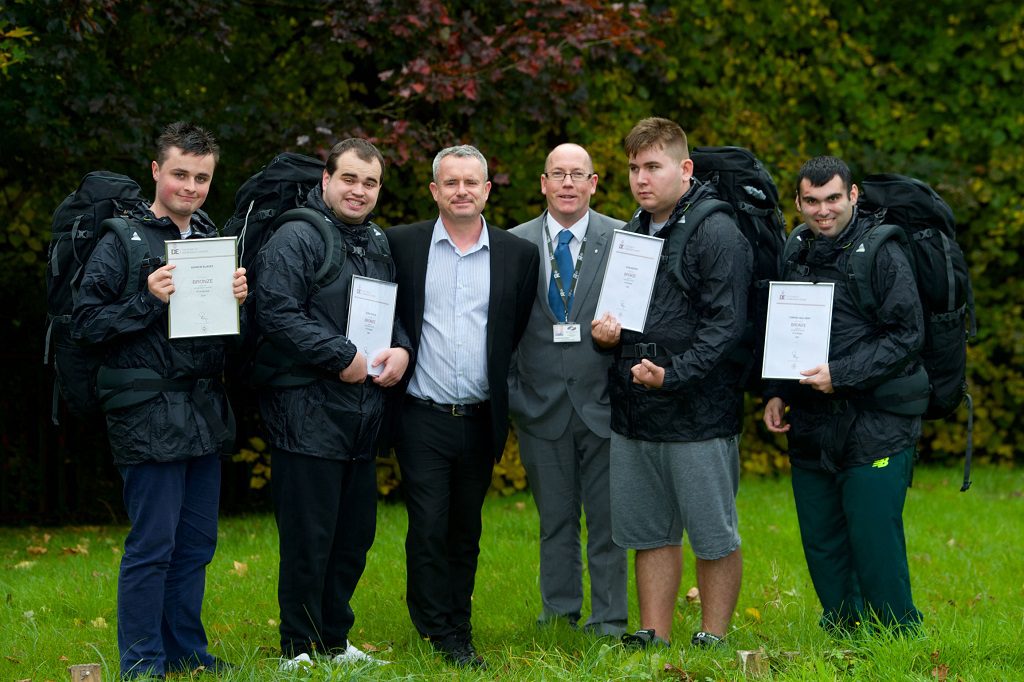 Five young Renfrewshire people profoundly affected by autism have overcome their disabilities to pick up the world’s leading youth achievement award in its Diamond Anniversary year. The young people are the first from Renfrewshire Health and Social Care Partnership Learning Disability Services (RLDS) to join the millions of youngsters who have gained coveted Duke of Edinburgh Awards. These were set up in 1956 to encourage young people aged 14-24 to push their personal boundaries and gain new skills. Steven James on a Duke of Edinburgh expedition

The Renfrewshire lads’ amazing feat was made possible only through the combined support of enthusiastic and highly committed staff within Gateway, an intensive service provided by RLDS for people with autism and complex needs, and Renfrewshire Council’s Youth Services.

The Renfrewshire five – some unable to communicate through speech – completed:

–        a gruelling practice expedition and an assessed expedition involving outdoor physical activity for six hours a day over two days and an overnight camp. This trip was the first time one of the young people had stayed away from his family home

–        six months’ volunteer work along with the Countryside Rangers at Barnbrock Farm, near Lochwinnoch – part of Clyde Muirshiel Regional Park.  Each week for a hour they planted  juniper trees and cleared overgrown vegetation to  help clear pathways and form extra areas for replanting

–        three months learning a new skill for one hour per week – some learned to play drums , others opted for the guitar and some polished up their singing.

The five Award winners completed their tasks within the same set period set down for other candidates.

However, weeks of special planning and risk assessments had to be done to help them feel comfortable with their new experiences and surroundings so they were able to complete the demands of the Award safely.

Several trips were made to Barnbrock Farm to allow the young people to get to know the environment.  Social  Stories with pictures – specialist material designed for people with autism – on what to expect on the farm were also used to help people get used to this new experience.

The young Award candidates were introduced to the gardening equipment gradually too – it took one person three weeks just to be comfortable putting on the gloves and wellington boots.

In the music challenge, one of the youngsters took five weeks to go into the studio, sit at the drum kit and hold the sticks in their hand.

Asked about their experiences on the last day of expedition, award winner Connor Galloway said: “It was very hard work and I am tired but it was great fun” while Andrew Blades said: “I had a great time and great laughs”.

Stephen James gave two thumbs up, while Lewis Gibson’s amazing smile lit up the room – Ryan Hunter was laughing so loud  that support staff had to cover their ears!

What’s more, the fivesome’s  fantastic efforts have benefitted other Gateway service users though the formation of:

–        Gateway’s own musical band – The Gateway Clash. They made their second public appearance when they shared the stage with other local bands and artists at a live music night at the Ogilvie Club on 7 October.

–        a new hill-walking group which has conquered hills in nearby areas The Wangie, Earls Seat and Dumgoyne.

The five young people received their Awards at a conference on learning disabilities attended by over 200 staff from the Renfrewshire Health & Social Care Partnership (RHSCP).  The Partnership plans, provides and commissions a range of council and NHS activities and services for people requiring support to remain living and active in the community.

Councillor Iain McMillan, RHSCP Chair, popped in to Gateway this week to add his congratulations to Award winners and all staff involved.

“This is a fantastic achievement for the five young people and the staff supporting them – everyone should be very proud of their success.

“Undertaking the Duke of Edinburgh Award is a huge challenge for any young person and for the young people at Gateway, it was a mammoth task.

“However, the Gateway team ,  aware of the marvellous work done through this scheme , decided it would be a good idea to give the people using our service the same opportunities open to many other young people.

“These young people showed a massive amount of willpower, courage and sheer determination to reach their goal.

“And the dedication, skills and patience of staff from social work and community education, who found many creative solutions to the challenges involved, is an excellent example of how public services should – and can – work together to help everyone in our community

Glasgow News? Daily Updates part of our network
Spree for All fringe festival will be magic