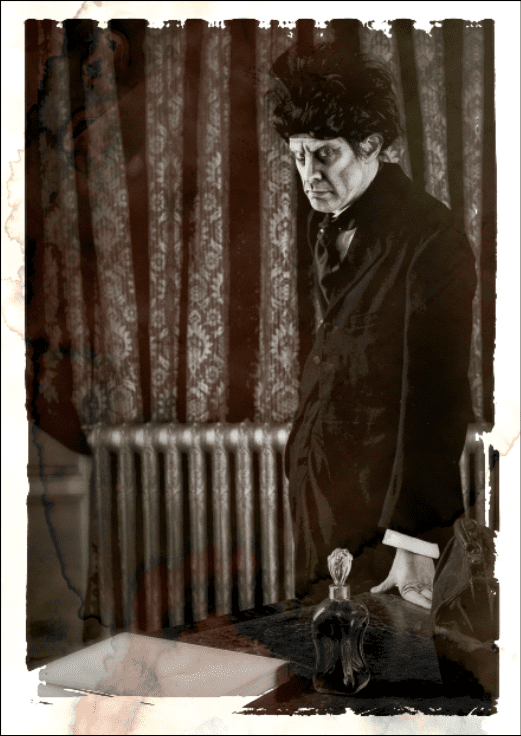 Paisley is set for a unique Halloween spectacular as multi-award-winning visual theatre maker Al Seed holds the world premiere of his latest solo show The Tapping as part of the town’s winter festivities. The show – a gothic-horror melodrama based upon Edgar Allan Poe’s The Raven – is part of the town’s UK City of Culture 2021 bid and taking place during its Halloween festival, in Paisley Town Hall from 26 to 27 October.

Al – a former artist in residence at Glasgow’s The Arches – is a critically-acclaimed performer who designed his latest performance based upon a long-term fascination with the writings of Edgar Allan Poe, and elements from Greek myths. The show is one of the first to be funded through Renfrewshire’s Culture, Heritage and Events Fund – a five-year £500k programme to transform the town’s creative scene and build up cultural capacity during the Paisley 2021 bid.

Paisley 2021 Project Director Jean Cameron said: “For an artist as well respected as Al Seed to premiere his new show here is a major coup for Paisley ahead of the bid going in next year – and it just highlights our growing reputation as one of Scotland’s key cultural destinations.

“We are delighted the Culture, Heritage and Events Fund has enabled Al to create this original piece of work and I would recommend you book early for what is sure to be a fantastic spectacle in one of Paisley’s iconic venues.”

The Tapping is described as ‘drawing upon the myth of Orpheus’ descent into the underworld’ and will ‘take its audience down a hallucinatory spiral of madness’ within the stunning backdrop of Paisley Town Hall.

The show relies heavily upon strong visual and design elements, original music, and the space in which it is set, while drawing upon the history and conventions of gothic-horror literature and art, and related genres.

Al Seed added: “I am delighted to be presenting the debut of The Tapping at Paisley Town Hall and in support of the Paisley 2021 bid.

“This past year it has been wonderful to receive so much support in the making of the show; especially from the staff at Paisley Arts Centre, Johnstone Town Hall, and Paisley Town Hall itself. I am now really looking forward to sharing the finished results.”

The show is being produced by FERAL Arts in association with Renfrewshire Leisure. Supported by Renfrewshire Council’s Culture, Events and Heritage Fund as part of Paisley’s bid for UK City of Culture 2021

Paisley’s Halloween festival is free to attend and runs from Friday 28 until Saturday 29 October and will feature a spectacular lantern-lit parade through the town and a fire garden of flame-breathing sculptures. More information at www.paisley2021.co.uk