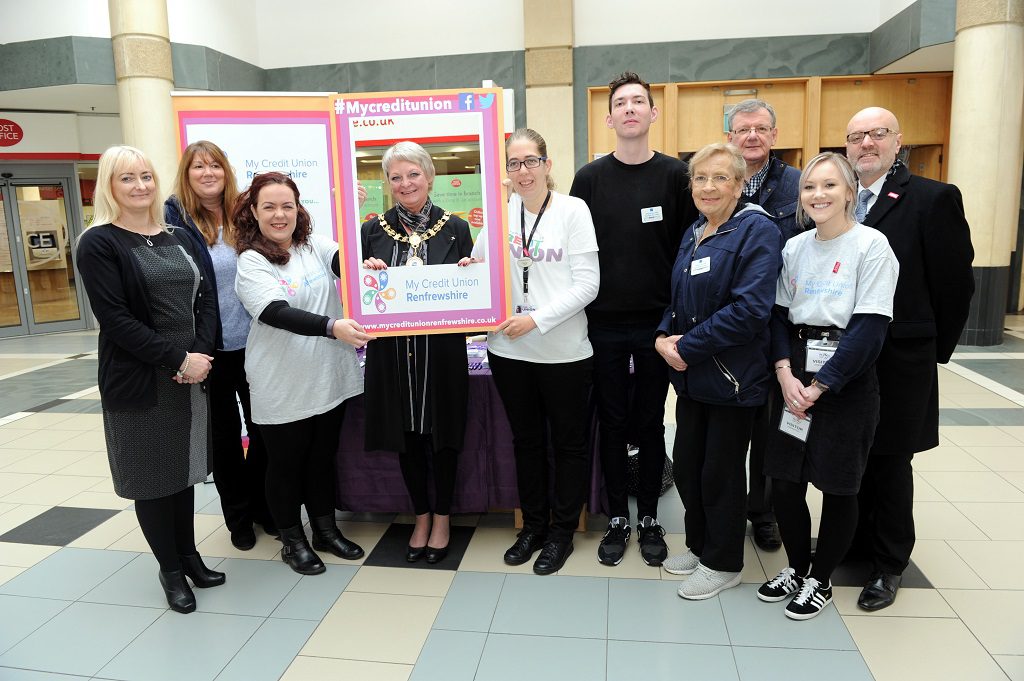 Renfrewshire’s five credit unions have teamed up to offer a one-stop-shop website aimed at covering the savings and loan needs of everybody in the area. The new site at  www.mycreditunionrenfrewshire.co.uk has just been launched and brings together Gleniffer, Johnstone, Renfrewshire-Wide, Scotwest and White Cart credit unions.

It means the various services offered by the five organisations are available in one place – allowing visitors to find whatever savings and borrowing plan suits them and link through to the credit union website. The website was funded through Renfrewshire Council’s Tackling Poverty Programme – a two-year £6m scheme covering 50 projects aimed at taking on the causes of deprivation. And representatives of all five credit unions were joined by councillors in Paisley’s Piazza to promote the scheme to lunchtime shoppers.

They were joined by kids from Childcare First’s Hillview Nursery in Ferguslie Park – one of the first organisations to make use of the new website.

Paula Ferrier, marketing officer for  www.mycreditunionrenfrewshire.com, said: “The website signposts the users to a credit union which suits their needs.

“The five credit unions all offer different things but whatever the user is looking for – savings, a mortgage, a car loan, a funeral loan – it’s all there.

“We aren’t like the banks in that we aren’t in competition – we all work together and support each other.

“We are not-for-profit organisations and our members are the shareholders so by saving with us people are giving back to the community.”

Renfrewshire’s Provost Anne Hall was there to help launch the scheme and she added: “The website is a great idea and really easy to use – I would recommend anybody who is thinking about borrowing any money have a look at it.

“We are delighted to have funded this scheme through the council’s Tackling Poverty programme – by helping the credit unions market what they offer we are putting money back into the pockets of people who need it most.

“Since the programme started in 2015 it has helped create more than 600 new credit union members across Renfrewshire, and saved local people a total of £84,000 on interest payments compare to high street banks.”

You can see the new website now at www.mycreditunionrenfrewshire.co.uk