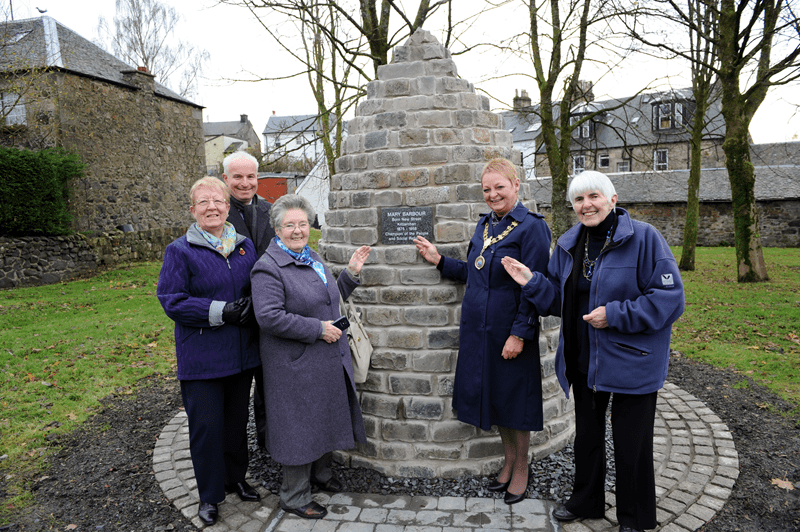 A woman whose pioneering community activism a hundred years ago still inspires people today has been honoured in the village of her birth.

Mary Barbour, who led the famous Glasgow Rent strike of 1915, has been honoured with the installation of a commemorative stone cairn in Kilbarchan. A plaque on the cairn features the inscription: ‘Mary Barbour. Born New Street, Kilbarchan. 1875-1958. Champion of the People and Social Reformer.’

Provost Hall said: “Mary Barbour continues to be an inspiring figure. She spoke up for people who needed and deserved fair treatment and inspired them to stand up for their rights as individuals and as a community.

“It is a source of much pride that Mary learned those values here in Renfrewshire – in Kilbarchan where she was born and then in Elderslie, before she moved to Glasgow as an adult.

“I would like to pay tribute to all those who have helped to keep Mary’s memory alive and to keep her legacy relevant and inspiring for future generations.”

David Blair, Chairman of the Kilbarchan Community Council, said, “Mary Barbour’s legacy has a massive ongoing impact today. Before her intervention there were no tenants’ rights. The government just didn’t think it should get involved in any area between buyers and sellers. She forced the government to take a role and to legislate to improve conditions.”

Maria Fyfe, of the Remember Mary Barbour Association, said, “Mary is regarded as the mother of social housing. She had a huge ability to engage people and make them think they could win in spite of everything that was against them, including the law and the government’s laissez faire attitude. Her rallying cry at meetings was, ‘Are we going to let them get away with this?’ We have a huge amount to thank Mary Barbour for, especially her drive to help others.”

The cairn has been funded by a grant of £6000 from the Renfrewshire Citizens Fund following a recommendation from the council’s Johnstone and the Villages Local Area Committee.

Glasgow News? Daily Updates part of our network
Free books are in the bag for schoolkids