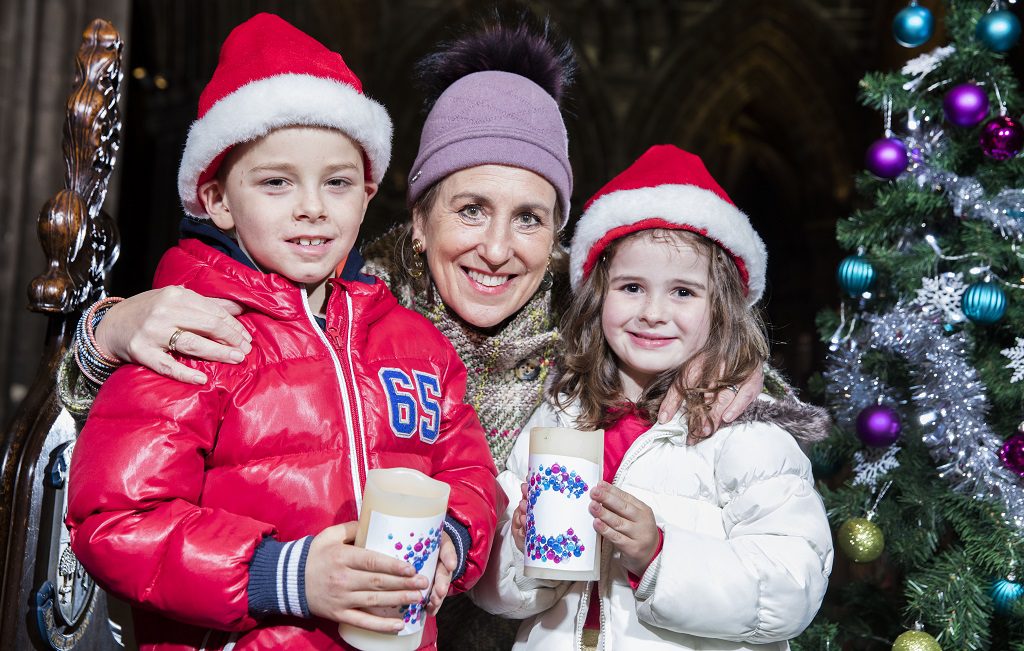 Tickets are on sale now for the festive event in the grandeur of Glasgow Cathedral on December 3 which will raise funds to help beat cancer sooner. Kirsty who will host the concert was joined at the event launch by seven-year-old Kai Green and six-year-old Millie Scally. Both youngsters who live in Glasgow are recipients of Cancer Research UK Kids and Teens star awards in recognition of the courage they’ve shown during treatment for cancer. The countdown to Christmas officially began as they pulled on santa hats and were treated to chocolate advent calendars before being presented with VIP tickets for the concert. Every hour, around three people in Scotland* hear the news that they have cancer. But cancer survival rates have doubled since the 1970s and Cancer Research UK’s work has been at the heart of that progress. The charity has only been able to achieve this and fund outstanding scientists, doctors and nurses thanks to the dedication and generosity of volunteers organising events like the Glasgow Carol Concert. Newsnight host Kirsty Wark, who lost her dad Jimmy to lung cancer in 1994, knows how vital it is to bring forward the day when all cancers are cured.

“It’s been a pleasure to meet with Kai and Millie and to see how excited they are about Christmas. I’m really looking forward to the carol concert and being part of what will be a magical evening. It’s wonderful to know that all the money raised will go directly towards Cancer Research UK’s life-saving research in Scotland. I really hope the people of Glasgow will come along to what will be a glorious event. The cost of their ticket will go a long way to ensuring that the world class research that goes on in the city can continue to make great strides towards beating cancer.”

One of Scotland’s best selling singers, Barbara Dickson whose string of hit singles including Another Suitcase in Another Hall, Answer Me and I Know Him So Well is to perform at the concert. Also singing will be The Other Guys, Scotland’s premier all male a capella group, opera singer Cheryl Forbes as well as musical duo Frances Thorburn and David Farrell. The junior performance choir from Erskine Stewart’s Melville School, Edinburgh and the senior choir from the High School are also taking part. The festive event will feature readings by Scotland’s national poet, Liz Lochead and actress Joanna Tope as well as a performance by actress Isobel Rutter who has been through breast cancer.

Christmas and New Year is a particularly emotional time for many families of children with cancer. Primary three pupil Kai Green is hoping spring 2016 will mark the end of three years of treatment for acute lymphoblastic leukaemia. Celtic fan Kai, who is a keen footballer had weakness in his legs when he was first diagnosed on April 21 2013 and lost his hair during the first nine months of intense chemotherapy. But Kai is today battling back to full fitness.

Kai’s mum, Paula,32, said: “We were amazed that even after chemotherapy, all Kai wanted to do was play football in the garden with his brother Sean.

“I’m so proud of both my boys and of Kai’s fighting spirit. Kai has come so far and is doing so well now. He just loves Christmas and I can’t wait to wake up on Christmas morning and see his face as he opens all his presents.”

Primary two pupil Millie Scally of Rutherglen was diagnosed with Acute Lymphoblastic Leukaemia, a cancer of the white blood cells, in October 2012, just weeks before her third birthday. Millie is now clear of cancer after completing treatment in spring this year.

“No child should ever have to go through the experience of having cancer and they’re all stars for getting through it.”

Cancer Research UK spends more than £31 million a year in Scotland on some of the UK’s leading scientific and clinical research. Glasgow is home to a thriving community of world-class cancer scientists and doctors, who are working to reduce the devastating impact of this disease, not only locally, but around the world. An exciting programme of work has been established at the Cancer Research UK Beatson Institute, Glasgow  to look for ways to tailor treatment for pancreatic cancer. Scientists in Glasgow first manufactured the brain cancer drug, temozolomide. Thousands of people now benefit from treatment with this drug worldwide. Scientists in Glasgow have helped uncover some of the secrets of p53 – a molecule that is faulty in many cancers. Their work is helping open new avenues of investigation that could effectively treat this complex disease. This is only possible thanks to the generosity of the people of Glasgow who support events like the Glasgow Cathedral carol concert.

Organised by a dedicated committee of volunteers, the Glasgow Christmas Carol Concert has raised more than £400,000 for Cancer Research UK since it first started in 1999. The event takes place on Thursday December 3 at 6.15pm. Tickets cost £40 each or £100 for a family ticket which is two adults and two children. They are available on http://www.eventbrite.co.uk/e/glasgow-christmas-carol-concert-for-cancer-research-uk-tickets-16755067859

Glasgow News? Daily Updates part of our network
Every P1 child to get three free books during Book Week Scotland