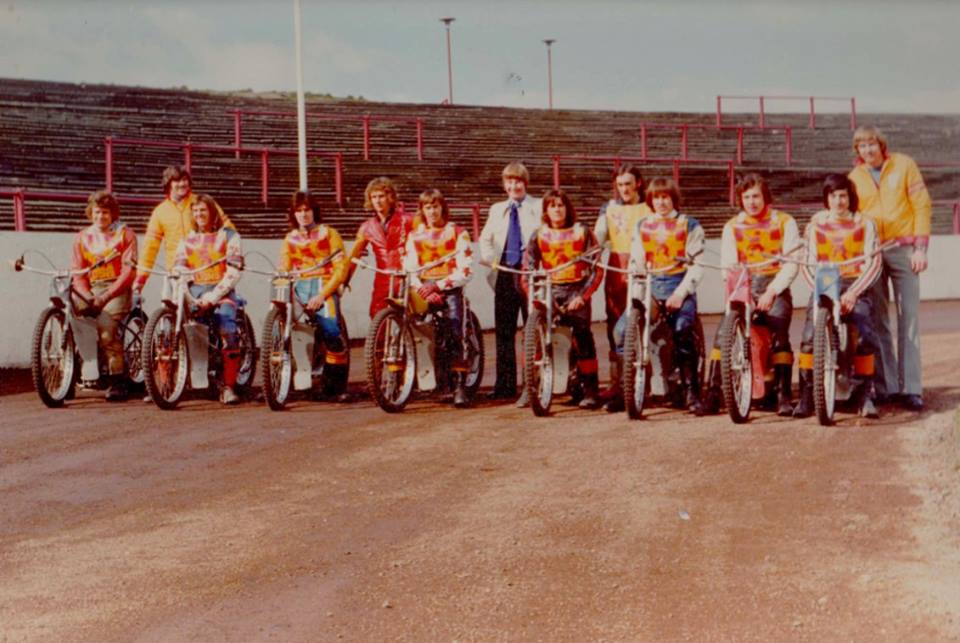 Former Paisley Lions speedway riders have begun arriving in the town for a celebration of the sport’s short life at the former St Mirren football ground in Love St, which will take place this coming Saturday in the 5 on 5 Club, the social “arm” of the Pro-Life Fitness Suite. Three riders based in the Antipodes, Kiwis Mike Fullerton and Colin Farquharson, and Aussie Burnett (Bernie) Foot will be meeting up with fellow former Lions Sid Sheldrick, Alan Bridgett, and Colin Caffrey, and former promoter Neil MacFarlane, will be meeting up for the first time in almost 40 years to indulge in a night of nostalgia, and they will be joined by numerous fans who still remember the days when the bikes roared around the Love St track.

“Yes, it’s been nearly a year in the planning, but the big day is almost here,” said organiser Bill Elliot. “The fact that some former riders are doing a 24,000 mile round trip to be part of the night says an awful lot about what the Lions meant to so many people. I’ve had requests for tickets from people in Spain and from the South of England northwards, so I’m confident it’s going to be a night full of nostalgia, a lot of laughs, and generally one of those nights you really don’t want to have missed. There will be an evening of 70’s music, with particular emphasis on 1975 and 76, when the Lions raced in Paisley, and a slide show with loads of photos of the riders displayed on the big screen during the night, just to help folk remember what it was all about. A couple of riders like Aussies Stuart Mountford and Bob Baker, who can’t be there, have sent messages which we’ll read out to the assembled guests on the night, so we’re hoping that this one and only chance to see and hear all these icons in the one room for probably the last time will be well supported.”

“If that wasn’t enough to whet the appetite on its own, when the very nice people at Glasgow Speedway heard about the event, they very kindly offered complementary tickets for anyone attending, to come and watch the Glasgow Tigers take on the Edinburgh Monarchs in the second and deciding leg of the League Cup Final on Sunday afternoon at the Peugeot Ashfield Stadium, so it’s going to be quite a weekend!”

He said finally, “I’m still getting enquiries from folk both locally and further afield, which is very encouraging, but there’s still time for folk to book their spots by either phoning me on 07854 724184, or emailing me at bettens6@talktalk.net, and take up the chance of seeing some live speedway on the Sunday into the bargain. The cost of the evening is only a tenner, which I think is a good deal, so I’m advising people wanting to indulge themselves in a night of pure unadulterated nostalgia to get in touch with me quickly if they haven’t already done so!”