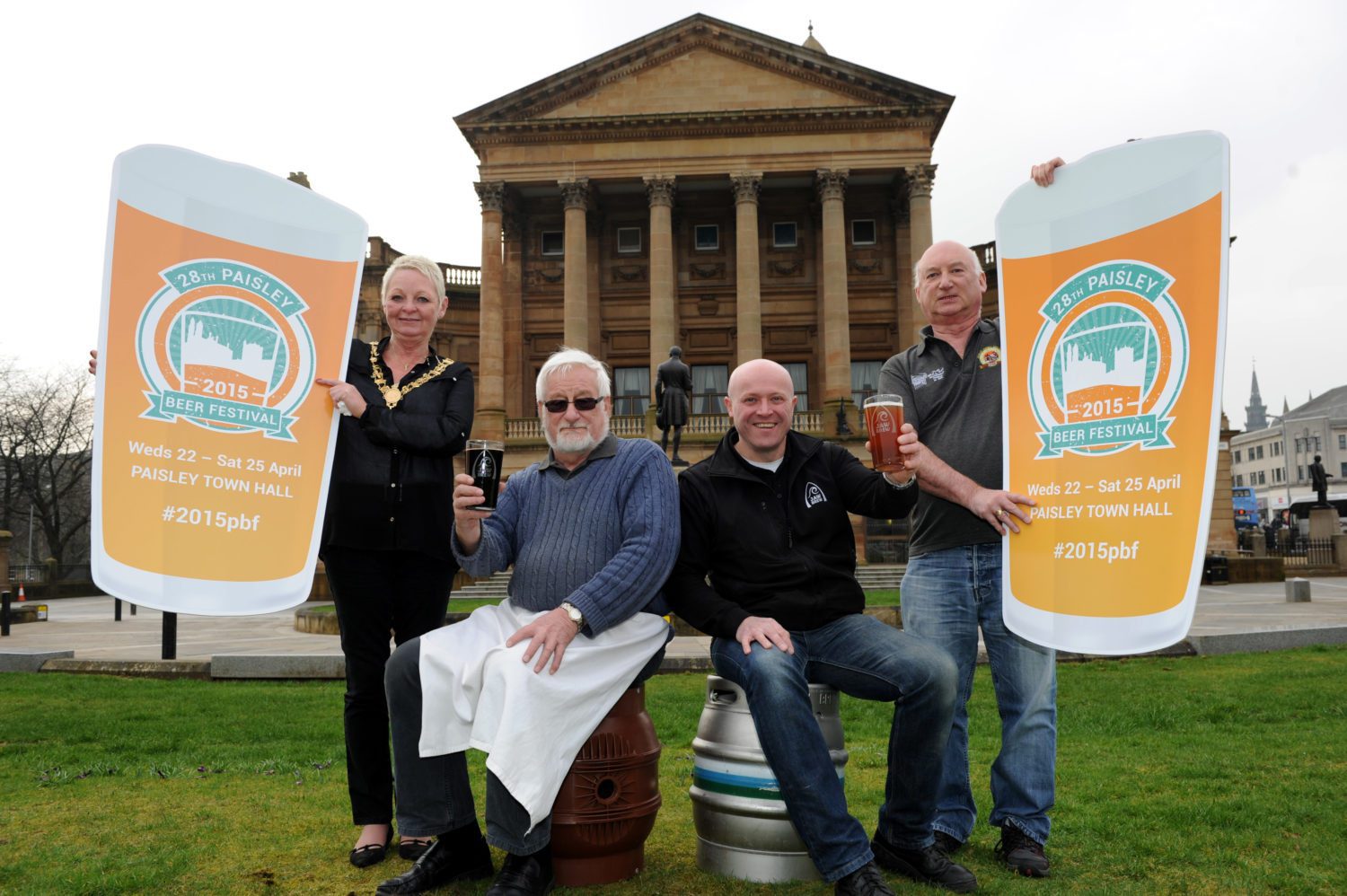 Paisley’s ever-popular beer festival is back for another outing – and this year it’s being served up with a side order of food.

The 28th Paisley Beer Festival – run by the Renfrewshire branch of the Campaign for Real Ale – will be in Paisley Town Hall from Wednesday 22 to Saturday 25 April.

The event is Scotland’s biggest real ale festival and every year attracts thousands from across the country to sample a wide selection of real beers, ales and ciders.

And this year for the first time it will run alongside a one-day food festival – organised by Renfrewshire Council – on the Saturday only.

Both events are taking place as part of Scotland’s Year of Food and Drink, supported by Event Scotland and Visit Scotland, which aims to showcase Scotland’s outstanding natural larder and exceptional natural produce.

The food festival will be in Abbey Close between noon and 6pm and includes the Slug in a Bottle Market, food/craft workshops, live music from Loud ‘n’ Proud, and kids’ entertainment including TV’s Mr Bloom.

Focusing on quality Scottish produce, the food festival also includes the usual twice-monthly Paisley Farmers’ Market just up the road at Paisley Cross, where visitors will be able to take in live cookery demos.

Meanwhile, the beer festival will take in a first of its own, with Renfrewshire CAMRA having added an all-new wine bar featuring speciality wines from across Scotland.

Renfrewshire’s Provost Anne Hall met with some of the members of the local CAMRA committee to help publicise the event, joined by Andy Hare of Hillington-based Jaw Brew, this year’s glass sponsors.

She said: “The Paisley Beer Festival is real home-brewed success story, and the volunteers of Renfrewshire CAMRA deserve great credit for building such a popular and well-established event here in the town.

“We are delighted to be adding to the mix by adding the food festival, which will give families and others a reason to visit the town while it is busy for the beer festival.

“The Paisley Food Festival is an event we are looking to grow in the years to come as we build towards the town’s bid for UK City of Culture in 2021, which is just one of the ways we are using culture and events to drive regeneration.”

Bob McWilliam of Renfrewshire Branch CAMRA, who was one of the original organising CAMRA team 27 Paisley festivals ago in 1987, added: “Next month’s event will be the first time all the facilities within Paisley Town Hall will be used, which makes this the premier real ale festival in Scotland.

“This, with our partnership with Renfrewshire Council with the food festival is going to make it a real ale festival to remember.”

Annique Armstrong, regional director for VisitScotland, said: “We are delighted to support Paisley Beer Festival this year with funding from Scotland’s Year of Food and Drink.

“Hopefully the funding will help enhance this festival, which is a great event that aims to attract both locals and visitors to the area and is just one in this year’s calendar throughout the whole of Scotland.

“Food and drink plays an important role in the visitor experience, with £1 in every £5 being spent on it so I’d like to wish Paisley Beer Festival every success!”

For more info on the beer festival, visit www.paisleybeerfestival.org, and for more on Scotland’s Year of Food and Drink, visit www.VisitScotland.com/TasteScotland