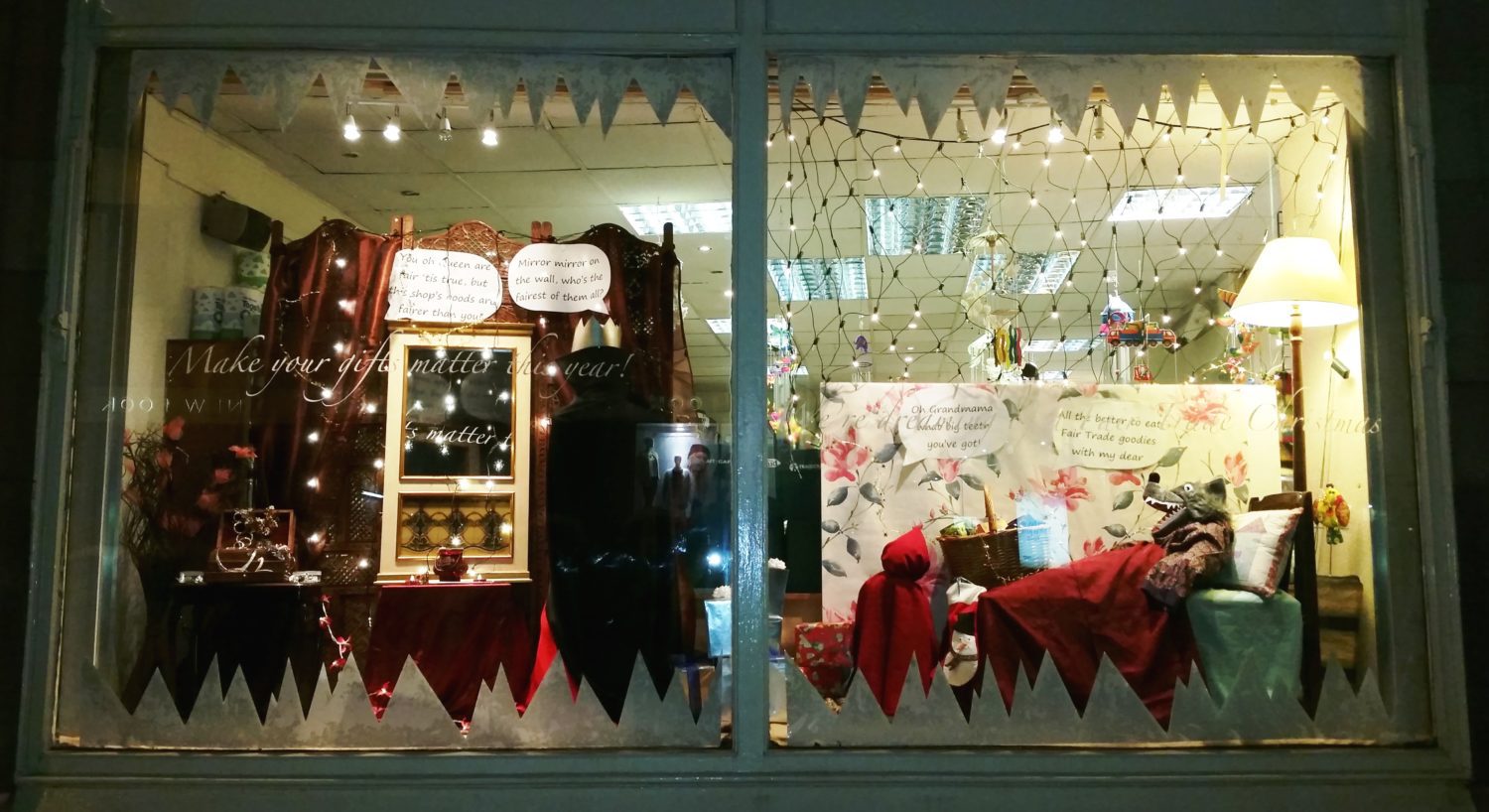 [vc_row][vc_column][vc_column_text]It was during one of my annual Habitat for Humanity* builds in 2013 (this time to Malawi) that one of my team members revealed that his day job was designing and implementing window installations for shops in Paris, Shanghai and Hong Kong.

Obviously he heard about our shop, Rainbow Turtle, in Paisley from me and he said he would come and do our Christmas windows. Believing this to be a bit of a joke I thought nothing would come of it. However, in October 2013 not only Adam, but the whole team I had been working with (18!) landed on me for a weekend, made origami animals, and installed a whole winter wonder land in our windows. This was a real demonstration of team work in action.

The legacy of that has been realising what a difference a good window display makes to the street and to the interest in the shop. It inspired students from the West College Scotland to design and implement our fantastic Fairtrade Fortnight jungle scene earlier this year to raise awareness of the plight of banana growers with the supermarket battles over lower prices.

Adam had suggested that we should do fairy tale scenes this year – and so linking fairy tales with our fairly traded goods has been the aim. We hope it brings a few smiles to people’s faces as well as spreading a more serious message at this time of year when we should think of those for whom life is a constant struggle. Remembering that every purchase we make has an impact on those who produce them – hopefully for the better if bought in a fair trade way.

This is a comment from our Facebook page “Comments from our kids about this display when visiting Rainbow Turtle today – ‘awesome’ and ‘cool’!!”
There seems to be a lot of young children stopping to look at the window and it’s really lovely to see the smile appear on their wee faces when they realise what the window is portraying. They love it!

If you would like to know more about Rainbow Turtle and what we do, or fair trade in general, please visit www.rainbowturtle.org.uk.

FYI
*Habitat for Humanity is a development charity aiming to eradicate poverty housing in the world. Teams are invited to take part in builds each year. I am recruiting for another Malawi build for 2015. These builds change our lives as well as those of the recipients of a new home. If you are interested in further information contact www.habitatforhumanity.co.uk[/vc_column_text][/vc_column][/vc_row]

Businesses helped to get Ready for Winter
Scroll to top