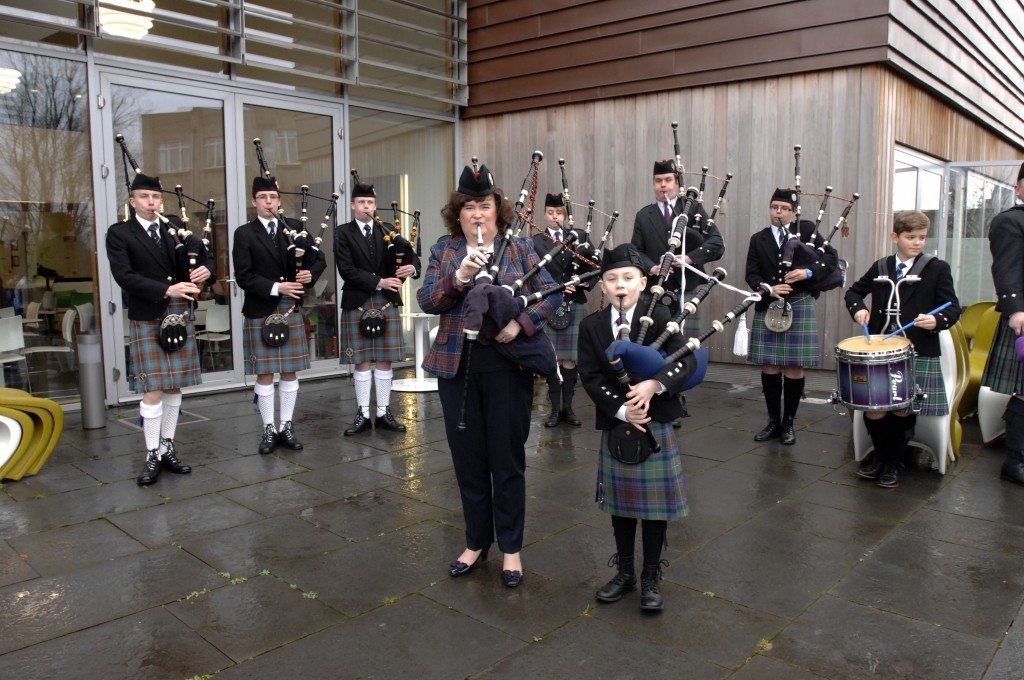 Thousands of competitors from around 140 pipe bands have signed up to the first major of the year, the EFR British Pipe Band Championships in Bathgate.

A full list of competing bands can be found at http://www.rspba.org/html/contestdraw.php?id=21.

International singing sensation, and West Lothian lass, Susan Boyle has been named Chieftain of the event which takes place on Saturday 31st May. The Championships, which attract competitors from across Scotland, the UK and beyond, will run alongside the well-established and much-loved Calor Scotland West Lothian Highland Games in the town with the day’s events being called Bathgate 2014.

One ticket, priced at £10 for an adult and £5 for a child, will offer access to both Meadow Park and Burgh Muir Park where there will be fun for all the family including Highland dancing, heavy athletics competitions and pipe band competitions.

Matt Purdie is on the organising committee. He said:

“We are absolutely delighted that, for the first time, these two fantastic events are being held on the same day offering a whole day of fun and entertainment for all the family. It is going to be a fantastic day out in Bathgate for fans of Scottish music and culture.”

The EFR British Pipe Band Championships, the second biggest pipe band championship in the world and the first major of the year, is set to attract around 4000 competitors. Bathgate hosted the event last year for the first time as part of a three-year deal.

“It’s a real coup for West Lothian to host the British Pipe Band Championships and we are very excited about the event for 2014 and of course welcoming West Lothian’s very own Susan Boyle – it’s great to have her support for such a prominent event for the region. We are very much looking forward to welcoming bands and visitors from all over the world to West Lothian.”

The Calor Scotland West Lothian Highland Games are now in their 43rd year and attract thousands of people to Bathgate each year from across Scotland.

Tickets are available at www.ticketweb.co.uk. For more information visit www.bathgate2014.com.

A full list of competing bands can be found at http://www.rspba.org/html/contestdraw.php?id=21.[/vc_column_text][/vc_column][/vc_row]