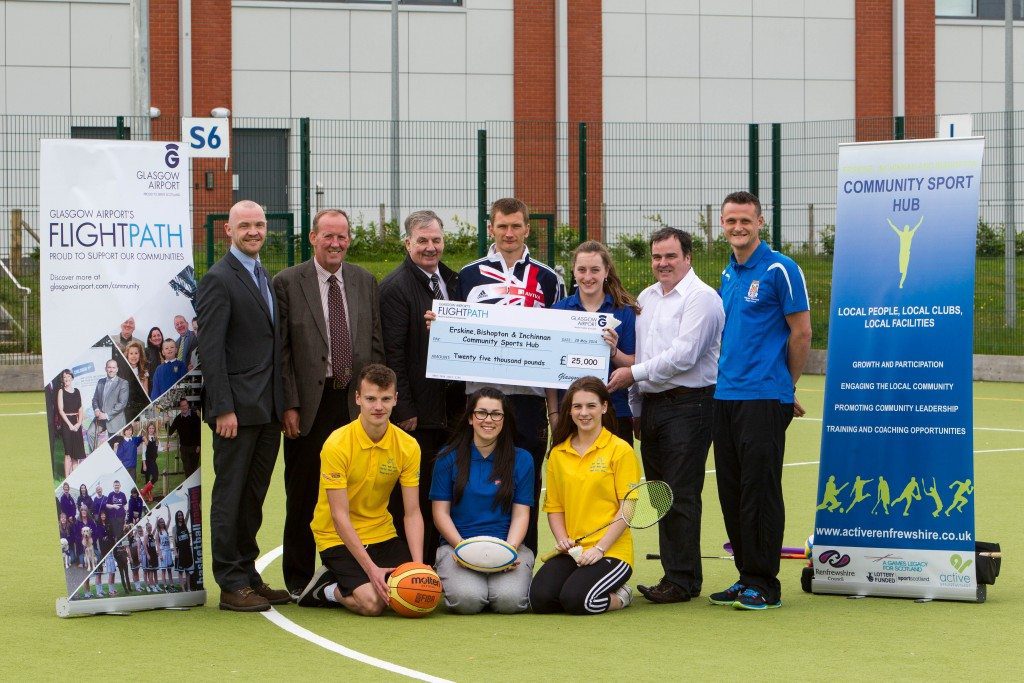 SPORTS COACHING IN RENFREWSHIRE TAKES OFF THANKS TO GLASGOW AIRPORT

Two of Scotland’s Commonwealth Games team joined some of the Renfrewshire youngsters who will benefit from an award of £25,000 from Glasgow Airport to improve sports coaching in the area.

Kilbarchan marathon runner Derek Hawkins, 24, and Erskine badminton player Rebekka Findlay, 20, took time out from their busy training schedules to pass on some tips to school pupils attending an after school sports club in Erskine.

With Glasgow Airport set to be the gateway to this year’s Commonwealth Games, its FlightPath Fund decided the one-off award should benefit grassroots sports coaching and participation in Renfrewshire. The money will be used to recruit hundreds of new sports coaches and deliver further training for existing coaches and volunteers.

The Erskine, Bishopton and Inchinnan Community Sports Hub was established in 2012 and represents 11 sports clubs and their 1,100 participants in the three towns.

The Community Sport Hub initiative is a key component of sportscotland’s contribution to the Scottish Government’s 2014 legacy plan and will help ensure the best use of facilities and boost the number of opportunities for local people to participate in sport through playing, coaching, volunteering or officiating.

At least half of the 400 spaces will be set aside for new coaches and volunteers with recruitment focusing on senior pupils from the local high schools, Park Mains High and Trinity High, as well as young people who are not in education, employment or training. The remainder will be allocated to existing club coaches and volunteers.

Hundreds of additional spaces on first aid, child protection and SportsLeader UK courses will also be facilitated by the FlightPath Fund award. Glasgow Airport had invited local charities and community groups to apply for a one-off ‘Challenge Fund’ of £50,000.

Councillor Iain Nicolson, a member of the FlightPath Fund committee, said: “The standard of application we received for the Challenge Fund was extremely high, but what really stood out about the sports hub project was the number of people of all ages who will benefit, and of course the wide variety of sports covered.”

Councillor Sam Mullin, who also sits on the FlightPath Fund committee, said: “With this being the year Scotland will host its biggst ever sporting event, there will never be a better opportunity to make the most of the feelgood factor around the Commonwealth Games to promote grassroots coaching and participation.”

Ross Williams, Chair of Erskine, Bishopton and Inchinnan Community Sports Hub, said: “We want to encourage as many people as possible – particularly young people – to use this fantastic opportunity to develop new coaching skills. The coach education programme will deliver a real legacy for sport in the community and ensure we make the most of the opportunities coming our way as a result of the Commonwealth Games.”

Councillor Jim Harte, Convener of Renfrewshire Council’s Sport, Leisure and Culture Policy Board, said: “A passion for sport stays with people and exercise really is the magic bullet for many of the chronic illnesses like diabetes and heart disease that plague our society. Exercise is also great for kids as it helps them sleep and improves their self esteem and mental health. This award will contribute towards our goal of creating a well qualified bank of coaches to support sports clubs and encourage people to adopt a more active lifestyle.”

Stewart Harris, Chief Executive of sportscotland, said: “This funding is a fantastic boost for Erskine, Bishopton and Inchinnan Community Sports Hub. As the hub continues to develop it will help to provide more opportunities for people of all ages and abilities to get involved in sport and physical activity, which is a key objective for sportscotland.” • The Glasgow Airport FlightPath Fund was established in 2010 to support community groups, charitable organisations and innovative projects with positive outcomes in three areas – education, employment and the environment.

• It has awarded in excess of £700,000 to more than 200 community groups and charities in parts of Glasgow, Renfrewshire, East Dunbartonshire and West Dunbartonshire. In 2013 the FlightPath Fund made awards totalling more than £200,000.

• Erskine, Bishopton and Inchinnan Community Sports Hub is made up of representatives of local clubs and supported by partners including Renfrewshire Council, sportscotland, Renfrewshire Leisure, the Scottish Football Association and other national sporting governing bodies.

• The Community Sport Hub initiative is a key component of sportscotland’s contributuion to the Scottish Government’s 2014 legacy plan. Since financial year 2010/2011, sportscotland has been investing £1.5 million of Lottery funding per annum into developing at least 150 hubs across all 32 of Scotland’s local authorities by 2016.

• With 131 hubs already up-and-running across Scotland, sportscotland is working with Renfrewshire Council to progress the seven hubs which are planned for the area.

• Community sport hubs provide information, training, support and advice on a wide range of sports and physical activities to make it easier for people to pursue a more active and healthier lifestyle.

• The specifics of community sport hubs vary according to local need and resource, but all follow five key principles:

Glasgow News? Daily Updates part of our network
Open House for tenants to have their say