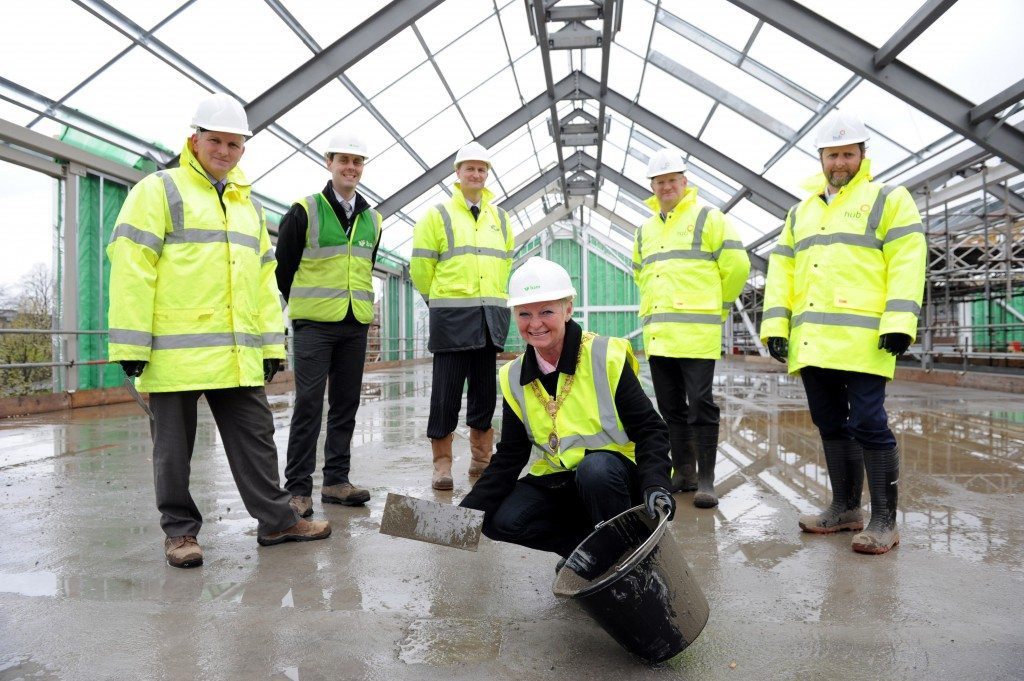 The first phase of construction on Johnstone’s new £14.5m town hall is now complete – and has been given the seal of approval.

Renfrewshire’s Provost Anne Hall was on hand to conduct a topping-out ceremony as she trowelled the final piece of concrete in the frame of the new building.

Renfrewshire Council has made a significant investment in the new town hall – due to open in summer 2015 – as part of its commitment to the regeneration of Johnstone.

It will house a new library, marriage suite, theatre and conference space, meeting rooms and a café, plus offices for council housing and social work staff, Police Scotland and Macmillan Cancer Support.

Construction began late last year and has progressed on schedule. The steel frame of the building is now complete, with the walls and roof starting to take shape.

The contractors hope to have the building fully wind and watertight by summer, after which work will continue to fit out the building and on the public space around it.

After taking part in the topping-out ceremony, Provost Hall said: “I was delighted to be there to help mark this important milestone in the construction of the new Johnstone Town Hall.

“It is impressive to think this structure has risen from the ground in less than three months.

“The new building will be bright, open and modern, and construction is now at the stage where Johnstone residents can start to visualise how it will look when they pass it.

“The council has invested a huge sum of money in the new facility – which we expect to be the centrepiece for life in the town and its surroundings villages for generations to come.”

Provost Hall was joined on site by representatives of building contractors BAM and by Hub West Scotland, who are helping to manage the project.

The building’s design was developed in close consultation with Johnstone residents at a series of events in 2012 – and the council is currently working with community representatives on designs for public artwork to sit inside the hall.

The council is also consulting with residents on plans for a new 50-space car park near Church Street as part of the development.

The proposals were well received and if planning permission is granted, the new car park could be in place by the autumn.

For more information on the town hall project, visit www.renfrewshire.gov.uk/johnstone