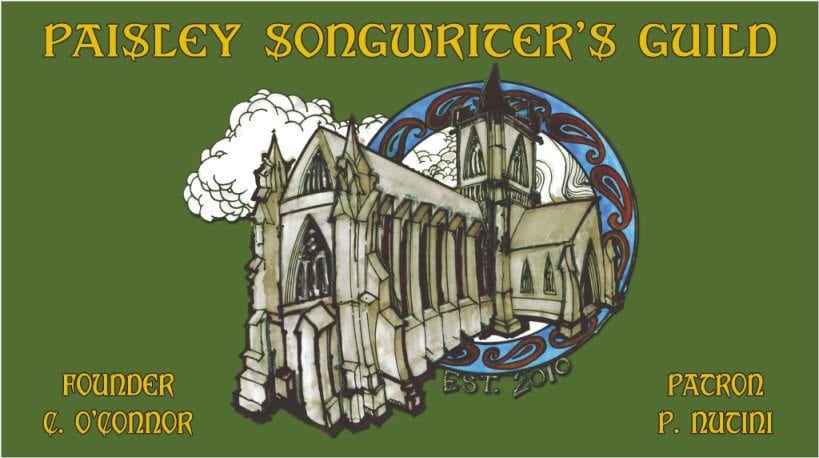 The following blog is a brand new feature to the Paisley website and is written by Alan McKim who is a talented musician and song writer from Paisley. I have followed Alan’s progress over the years and I have to say his talent and hard work is abundant. I just had to invite Alan to share his journey and explain just what goes in Paisley’s Music scene, please click the links below to find out more information and show your support for local talent.

First of all, I would like to express my gratitude to Brian McGuire for the opportunity and invitation to post my first ever blog on Paisley’s official website (www.paisley.org.uk). It gives me great pleasure to be one of the many people involved in Paisley’s current music scene, which it seems for generations, has been a hot-bed of thriving talent and diverse creativity.

I’m lucky to be involved with both The Bungalow and the Paisley Songwriters’ Guild, two great platforms for such musicianship. Having been open for just over a year and a half, The Bungalow has already played host to countless quality performances from hundreds of artists and bands. Our initial goal was to create a welcoming space, atmosphere and environment for both musicians and gig-goers alike, and this continues to be our main objective to this day. We have many great things in store, and all upcoming events can be found on the ‘Gig Listings’ section of our website at www.thebungalowonline.com. The Bungalow consists of a great team of wonderful and hard-working people who all aim to make your visit to our venue as pleasant and enjoyable as possible. The Bungalow was built with pride, love and integrity, and I believe the spirit of such work continues to resonate throughout the entire building to this day. It is without doubt, one of the most humbling projects I have ever been involved with. That’s not to say I take any credit whatsoever in the creation of the venue, as my job mainly consisted of making cups of tea and coffee, and mixing the odd dodgy batch of cement! The Bungalow to me represents more than just a music venue; it represents the coming together of like-minded souls who share an equal passion for the spirit and sense of community both musical and otherwise. To say that The Bungalow is run by friends is an understatement; it is more like a family. This not only includes those who work there and those who helped to build the venue, but the customers as well.

I joined forces with Chic O’Connor, founder of The Paisley Songwriters’ Guild, when several years ago outside the Paisley Beer Festival over a cigarette he asked me if I’d like to be involved. Knowing the sheer volume of talent I had witnessed in my days hosting the Crow Bar open mic night, it was without hesitation I came on-board. We held our first night in Caffe Luna on Storie Street (what is now De Beers), and the success of this evening encouraged us to continue with the project. From there we moved to the original Hamishes Hoose, which saw many an evening of cracking original song-writing talent. After two years, and with the opening of The Bungalow music venue, it was mutually decided that it made sense to move the Guild there and make this our new home. The Paisley Songwriters’ Guild hosts nights on the first Sunday of every month at The Bungalow, running from roughly 5:30pm to 8:30pm (next one is this Sunday 2nd of February).

It doesn’t stop there though; at the end of last year, the PSG released their debut album, ‘The Paisley Songwriters’ Guild, Volume 1’. This contained 16 members who had all put forward a song to be included. If you’d like to purchase this album, it is available in not only The Bungalow, but also The Argyll Bar, The Old Swan Inn, as well as Apollo Music in Causeyside Street and both The Record Market and The Music Centre in the west-end. Physical copies of the album can also be ordered and delivered worldwide directly from www.thepsg.co.uk. To download a digital version of the album, it is available on iTunes, Amazon, HMV Digital (all the usual digital download websites etc.), and is even available to stream on Spotify if you simply fancy a listen. This is an album that both Chic, I and all of those involved are immensely proud of, and believe it showcases some of the incredible level of song-writing, the PSG has to offer. In fact, already since its release there have been many more talented musicians come forward and request to be included in Volume 2, which we aim to begin work on at some point this year.

The latest addition and branch to the PSG tree, is the creation of PSG Radio, Paisley’s very own musical internet radio show, which broadcasts around the world live every Monday from 7-8pm (GMT), streaming directly from www.psgradio.com. We’ve already had some wonderful guests and featured artists on previous shows (all of which can be heard as podcasts found on the site), and we aim to continue this high standard of musicianship long into the future!