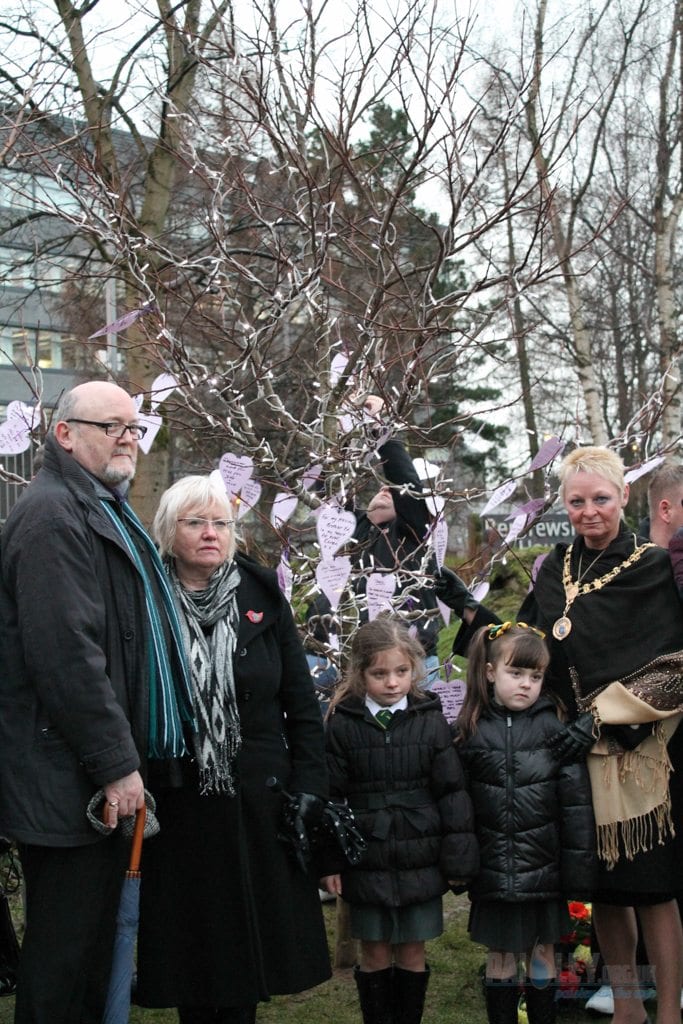 Renfrewshire residents who have lost loved ones to suicide gathered in Paisley for a special service on Tuesday 21 January.

The memorial service is in its fifth year and has become an established event where friends and relatives can find support and the chance to remember the people they miss.

The event is organised by the local support group of Survivors of Bereavement by Suicide (SOBS), and was attended this year by Renfrewshire’s Provost Anne Hall.

Those attending the annual event met at Renfrewshire Council’s HQ in Cotton Street for a short service led by Reverend Alan Birss of Paisley Abbey and Father John Tormey of St Mirin’s Cathedral.  They then gathered at the memorial tree for suicide victims where the Provost laid a wreath and lit the tree.

Visitors then had the chance to leave their loved-ones handwritten messages, on purple paper hearts on the tree’s branches.

Renfrewshire’s Provost Anne Hall – who welcomed guests to a reception in Paisley Abbey after the event – said: “I was touched by the poignant stories of people who have been affected by suicide. It really brings home the extent to which it affects the lives of those who are left behind.

“Attendance at the service has grown since it began five years ago and shows just how relevant the service is to those who have been bereaved by suicide.

“The support that this occasion offers is vital to those who have lost a loved one to suicide but is also an opportunity to raise awareness of the issue.

“Talking about suicide can save lives. Anyone struggling to cope should be aware that they aren’t alone and help is available.”

The event was supported by Choose Life, the national strategy to prevent suicide in Scotland.
Lisa Aitken, local Choose Life Young Person’s Resource Worker, added: “Every day, two people in Scotland die from suicide, but talking about it can save lives.

For more information on the Renfrewshire meetings of SOBS, call 0141 849 2200, or email Elizabeth.aitken@renfrewshire.gov.uk

All photographs above were taken for www.paisley.org.uk by Tracey Clements.

Glasgow News? Daily Updates part of our network
Thousands turn out in Paisley to see cars set off for Monte Carlo