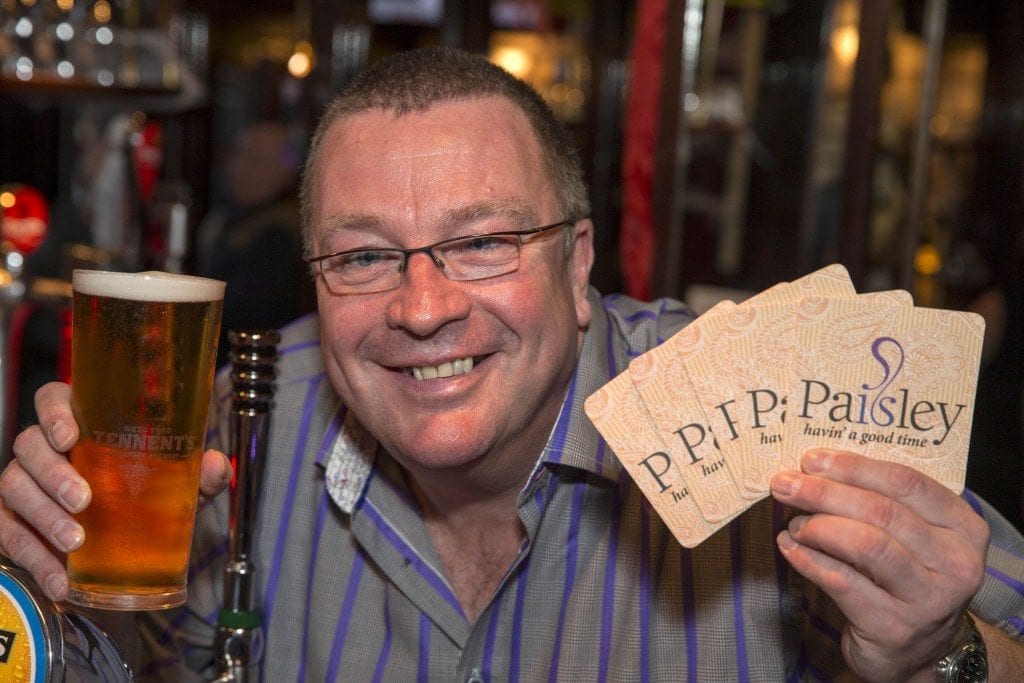 A CAMPAIGN is using thousands of beer mats to promote one of Scotland’s largest towns as the place to go for a good night out.

The drink mats featuring the words ‘Paisley is…havin’ a good time’ are part of a campaign to promote a positive message about Paisley and encourage more people to visit the town centre.

And with the message ‘Paisley is… saying drink sensibly’ on the flip side, the beer mats are being distributed around the town’s pubs and clubs.

Now the businessman behind the recent re-opening of a well-known Paisley pub is backing the campaign to promote the town.

David Davidson has recently revamped Corkers Bar, in Causeyside Street and all his customers are being given the ‘Paisley is…’ beer mats with their drinks.

David said: “There’s been a lot of positive activity going on in an around Paisley recently, especially with the success of The Mod and The Spree festival that took place in the town.

“Regeneration is the buzzword and there’s a bit of impetus in Paisley now.

“I think the town’s revival is on and it’s all about keeping that impetus going. There’s a feeling of positivity and we just need to keep our foot on the gas and move forward.”

David, who also owns the La Mesa Spanish restaurant, in New Street, Paisley added: “Paisley is a town with lots of potential and quite a few good small businesses have now opened in the town.

“We’re doing our wee bit for Paisley, but re-opening Corkers is a good business opportunity as well – we wouldn’t be doing it otherwise.

“The town centre should be a mix of leisure businesses, restaurants, shops and also people living in the town centre – it’s all about generating footfall.

“With more choice of quality cafes, bars and restaurants in Paisley offering good service then people will come back to the town centre.”

The Paisley Vision Board is behind the promotional beermats as part of their wider campaign to promote a more positive image of the town.

The ‘Paisley is…’ marketing initiative uses the letters ‘i’ and ‘s’ in the word Paisley to tee-up different positive messages about the town.

Its chairman, Renfrewshire Council leader, Mark Macmillan said: “Using beer mats is quite a unique way to get the message across that Paisley has a lot to offer when it comes to people’s leisure time.

“There are a lot of good business people in the town centre working hard to give people choices when it comes to having a night out.”

Other local bars who have been given the beer mats as part of Paisley Vision Board’s campaign to promote the town include The Old Swan Inn, in Smithhills Street; Hamishes’ Hoose, in the High Street; The Last Post, County Square; The Bungalow Bar, Shuttle Street; The Abbey Bar, Lawn Street; Gabriel’s, Gauze Street and Paddy Malarkey’s, The Bull Inn and Cafuffals, all in New Street.