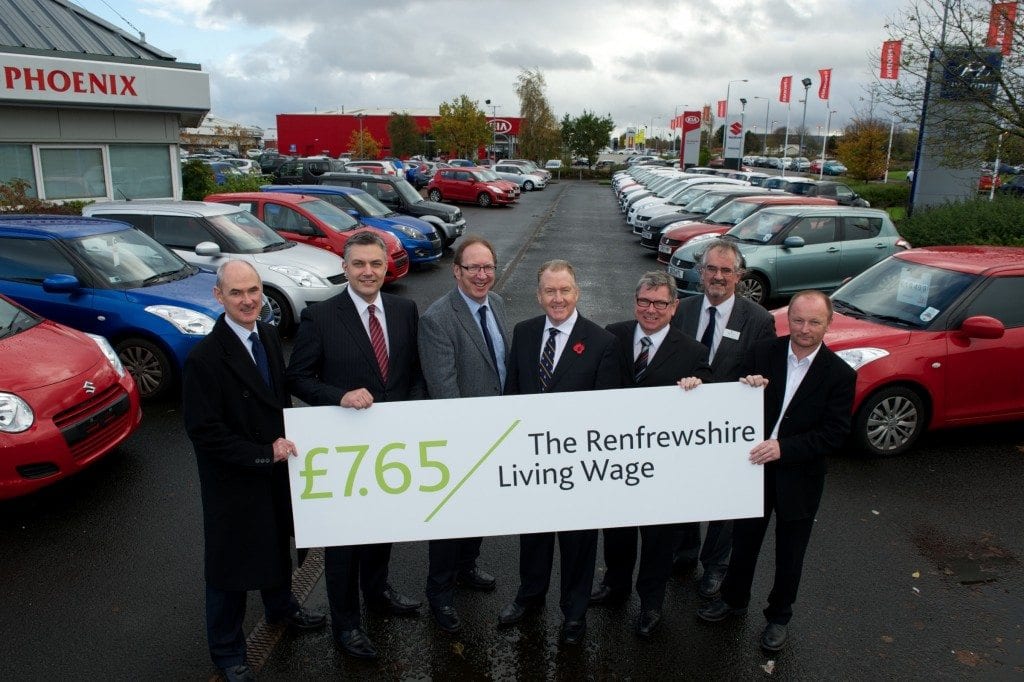 Renfrewshire Council Leader Mark Macmillan has launched a campaign urging businesses and organisations in Renfrewshire to sign up to the Living Wage.

The Council Leader visited the Phoenix Car Company in Linwood to meet with employers from the private and public sector that have already pledged to pay the Living Wage.

By supporting the campaign, Living Wage employers will receive recognition through the council’s website and be entitled to use the campaign logo across their own publicity activities. Earlier this week the UK Living Wage, the amount people need to earn to meet the basic cost of living, was unveiled as £7.65 per hour, significantly higher than the legal minimum wage of £6.31 for over-21s.

Councillor Macmillan said: “The national minimum wage has not kept pace with life here in Renfrewshire. It certainly isn’t sufficient to support a family. We need the help of the business community to make work pay so that employment is always the more affordable option for parents and individuals.

“Paying the Living Wage is good for business, good for families and good for Renfrewshire. It means that people can work their way out of poverty and it ensures Renfrewshire remains an attractive and prosperous place in which to work or build a future”.

In June this year Renfrewshire Council announced plans to pay an extra £1,000 per post to firms which agree to pay at least the Living Wage, taking the council’s investment in youth employment and Renfrewshire’s economy above the £8 million mark.

Renfrewshire Council pledged its commitment to the Living Wage at the end of 2012, benefiting around 800 council workers. Those who experienced the biggest gains were mostly female part-time workers involved in catering, cleaning and school crossing services.

Last month ahead of the campaign the Council Leader wrote to 150 employers across Renfrewshire to share with them the council’s own experience and inspire them to get behind the campaign. Among the first firms to pledge its support was Phoenix Car Company in Linwood.

Managing Director John McGuire said: “Paying a Living Wage has had a positive effect on productivity because it shows we value our employees.

“Also if you pay people a Living Wage they can afford to contribute to the economy and if people are spending, that’s good for business in the long-run.”

Businesses wanting to add their name to the list can find further information on the council website at www.renfrewshire.gov.uk or contact the Leader’s Office at Renfrewshire House.